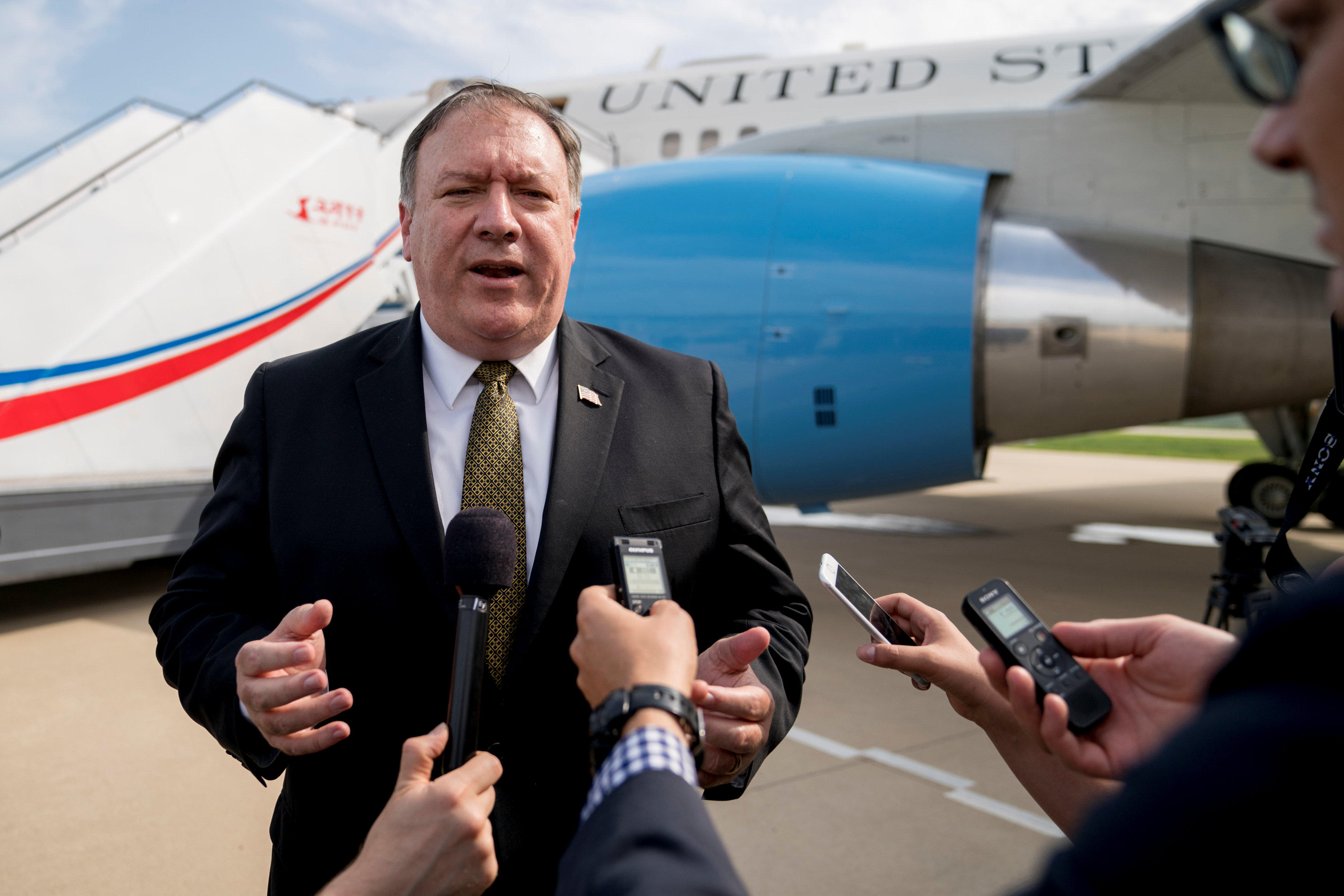 Secretary of State Mike Pompeo landed in Afghanistan on Monday. His visit, which was not announced in advance to the public, comes just two days after a U.S. service member was killed, and two others wounded, as a result of an apparent insider attack. At the time the U.S. soldiers there were training and assisting Afghan military counterterrorism efforts.

Pompeo met with Afghan President Ashraf Ghani at the presidential palace, Chief Executive Abdullah Abdullah, diplomats at the US embassy, and U.S. troops during his day-long visit to the country. This is Pompeo's first visit to the country as secretary of state, though he visited the country last year when he was CIA director.

Pompeo was welcomed by U.S. Ambassador John Bass and Gen. John Nicholson, the commander of the US and NATO forces in the country, at Bagram airbase near the Afghan capital of Kabul.

Both Pompeo and Ghani praised the Trump administration's strategy in Afghanistan. Ghani called it a "game changer" and Pompeo said it "is indeed working." But Pompeo admitted there is a great deal of work to do when CBS News asked him to give tangible examples of the Tump administration's successful approach — especially given Taliban territorial gains and the death of U.S. service members. Pompeo cited positive sentiments and forward movement but refrained from specific examples of decreasing violence.

"An element of the progress is the capacity we now have to believe that there is hope. Many of the Taliban now see they can't win on the ground militarily," Pompeo said.

"The progress we have made in increasing the size of the security forces and strengthening the reforms inside the government. The work we have done to demonstrate to the Taliban that the continuation of fighting will lead to a bad outcome. Not one that will help the best interests of the people in the territory where they operate. Those are hallmarks of real progress."

Spanning more than 16 years, Afghanistan is home to the longest American war in history. The Trump administration rolled out a "conditions-based" strategy for Afghanistan last year, which means there is no set timeline for drawing down at least 15,000 US troops that are currently on the ground.

The U.S. has two missions in the country: to support and train the Afghan army and to take down terrorists. The number of U.S. troops in the country will be dependent on conditions on the ground, aimed a progressing towards peace. In conjunction with this strategy the Trump administration increased the US troop count from the levels set by the Obama administration, but the number is still a drastic decrease from the high count of 100,000 US soldiers on the ground at the height of the US involvement.

The timing of Pompeo's visit is significant. Later this week, he heads to the NATO summit where U.S. will press other nations to step up their support to the security mission in Afghanistan.

"A new strategy in Afghanistan of asking our allis and partners, of which there are 41, to extend the finding for the security forces and to have a conditions-based operation," said US NATO Ambassador Kay Bailey Hutchison. She explained the reason for this ask is the growing terrorist strength in Afghanistan which has exported terrorism to the US and European countries alike.

Pompeo is also there just one week ahead of Trump's summit with Russian President Vladimir Putin, who has been supporting Taliban efforts. U.S. officials told CBS News earlier this year that Russia is holding the US efforts to combat the Taliban hostage, given the bad blood between the two countries in other arenas. However, one U.S. official on the ground described Russia's actions as "more of an irritant."

But on the whole, it has been a bloody year for the country. In January, a Taliban attack on a hotel in Kabul left 20 people dead, including four Americans.

The Taliban have broke the peace 38 times as of late June, according a top US military official on the ground. Given the violence throughout the year and the Taliban's inability to fully hold its fire, some Afghan experts are skeptical that this agreement will actually be the springboard for peace.

"While the ceasefire has been touted as a game changer, I don't believe it has had any meaningful impact on the state of play in Afghanistan," said Bill Roggio, the editor of the Foundation for Defense of Democracies' Long War Journal. "The Taliban, which never entertained the Afghan government's offer of a ceasefire, immediately resumed is offensive after its three-day ceasefire while the government continued its own ceasefire for another week. All this ceasefire did was give the Afghan government and the west false hope that peace is on the horizon."

There will be future questions about U.S. troop levels in Afghanistan. At this time, however, there are not conversations about winding down the U.S. presence anytime in the imminent future, according to a top Afghan official.

The Taliban, which has never publicly voiced any support for the Afghan constitution, is not waning in terms of its power in the country. It now controls more territory than at any point since the 2002, when it was ousted from power, Roggio points out. As a result, the U.S. and the Afghan government see drawing the Taliban to the table as a necessity in establishing a peaceful way forward for the war-ravaged country.

Pompeo did not directly answer CBS News' question asking him to characterize the dialogue between the U.S. and the Taliban. However, he did say the U.S. "can't run peace talks." The State Department has long said that peace talks need to be facilitated by the Afghan government. Pompeo pressed that line Monday, saying the talks would need to be "Afghan-led and Afghan-owned."

Ghani has said that if the U.S. pulled their support the Afghan government would not be able to maintain their own army for longer than six months. "There are factories producing suicide bombers. We are under siege," Ghani told 60 Minutes earlier this year.

U.S. government officials continue to express solidarity with the Afghan government and remain hopeful about the country's growing military might. Afghan security forces has been on the frontline since 2013, with the backing of U.S. and coalition support. Last year, the U.S. recently delivered Blackhawk helicopters to the country to increase the strength of the Afghan Air Force.

The sophistication of the Afghan military, however, is questionable. An Afghan strike earlier this year, which claimed to target a Taliban planning session, killed or wounded over 100 people at a religious gathering, according to a UN report issued in May.