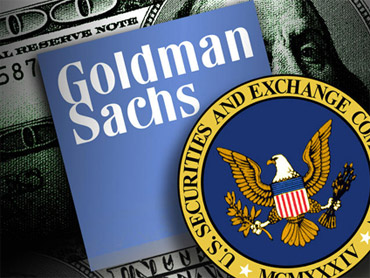 The SEC is charging that Goldman Sachs defrauded investors when it didn't disclose the role of a hedge fund in selecting mortgage securities for a portfolio that it ultimately would bet against. Goldman doesn't dispute the nondisclosure, but it is vigorously denying the fraud allegations. So the question at the heart of the case is simple - does the nondisclosure matter?

To backtrack, hedge fund Paulson & Co. approached Goldman in 2007 to set up a complex security tied to risky mortgages, which it would be able to bet against. Goldman created the security, known as a collateralized debt obligation, and marketed it to other investors, telling them that the mortgage assets were chosen by a third party, ACA Management LLC. What the investors didn't know is that Paulson also had a hand in choosing which mortgage securities would be involved in the deal.

As the Wall Street Journal notes, the essence of the case boils down to a one-word legal concept: material. In short, would investors have purchased the security had they known that Paulson selected the mortgages and was betting that they would tank?

Goldman maintains it wouldn't have mattered. When the SEC notified Goldman of possible civil charges last September, the bank responded that John Paulson was an unknown figure on Wall Street and investors wouldn't have cared about his position in the deal, according to documents reviewed by the Journal.

Goldman also said the investors had all the information they needed, including the types of mortgages involved.

"In these types of transactions, the buyer rarely knows who the seller is," Matthew Farley, a securities lawyer at Drinker Biddle & Reath LLP in New York, told the Journal. "The buyers weren't privy to Paulson's point of view, but so what? Does that fact relieve the buyer from performing its own analysis?"

But Fordham University law professor James Cohen comes down on the other side of the issue, telling the Journal that Goldman's involvement on both sides of the deal made full disclosure all the more important.

"Fundamentally you have a duty which arises out of a conflict and the conflict is what makes it smell," he said. "You see Goldman on too many sides of this transaction."

Whether the SEC can prove its case, or perhaps chooses to settle, Goldman's vulnerability has opened it up to attacks from outside the country as well.

British and German officials have rattled their sabers about looking into the possibility of seeking compensation from Goldman, as both countries bailed out banks that lost money in Goldman's mortgage-related investments.

The SEC case might also open Goldman up to future lawsuits from individual investors.