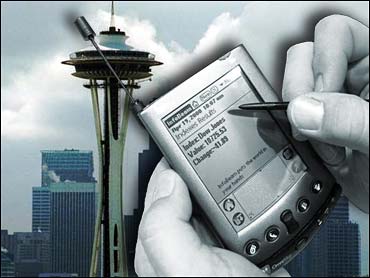 Seattle and San Francisco are the most "unwired cities" in America — top spots for computer junkies who send e-mail and surf the Web at restaurants, libraries or public plazas.

Metropolitan Seattle percolated past the San Francisco Bay area this year thanks to an abundance of Starbucks Corp. outlets, which have wireless "hot spots" where patrons linger over latte and laptops, according to Intel Corp.'s annual ranking. Seattle also benefited from wireless access at its Pike Place Market and the Space Needle.

Santa Clara-based Intel ranked cities based on the number of commercial or free "Wi-Fi" points from January to April 15 in the 100 largest urban regions in the United States.

Short for "wireless fidelity," Wi-Fi delivers high-speed Internet connections through a small radio tower. About the size of a can of beer, the radio can provide access to any mobile device within 300 feet.

Intel, which makes chips for wireless devices, is bullish about Wi-Fi. But the newest survey shows the nation as a patchwork — not blanket — of access.