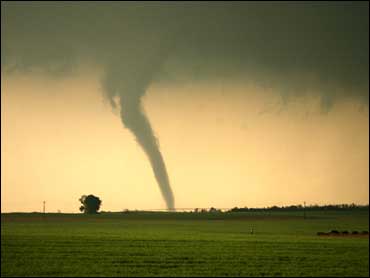 Rescue workers on Sunday searched for anyone still buried in the heaps of splintered wreckage left after a massive tornado obliterated most of this south-central Kansas town.

Waves of thunderstorms rippled across the Plains states on Sunday, drenching rubble that the Friday night tornado scattered across Greensburg and threatening tornadoes elsewhere.

At least 10 people were known dead from weekend storms — eight in the Greensburg area and two others elsewhere in Kansas — one Friday night and another in violent weather late Saturday, state officials said.

Amid the destruction, rescue workers and officials held out hope that death toll wouldn't rise and that they can rebuild their town, from replacing the destroyed churches down to the town's fire engines.

"At this point, it's still a search and rescue mission," Kansas state trooper Ronald Knoefel said. "We don't want to give up hope."

Search teams used trained dogs to sniff for bodies and used their hands and heavy equipment to clear away the rubble, but officials did not know how many people might still be missing.

"A lot of people have gone to other places and it's difficult to track them down," said Maj. Gen. Tod Bunting, the state's adjutant general.

National Guard engineers were assigned to help with the search. "Some of the rubble is just so deep," Bunting said. "That's really what our problem is."

The National Weather Service classified the Friday night tornado as an F-5, the highest category on its scale. The weather service said it had wind estimated at 205 mph, and carved a track 1.7 miles wide and 22 miles long. The last tornado that strong killed 36 people in Oklahoma City on May 3, 1999.

Tree trunks stood bare in Greensburg, stripped of most of their branches. All the churches were destroyed. Every business on main street was demolished. The town's fire engines were crushed. The massive concrete silos of a grain elevator towered over the flattened expanse of what was left of the town.

Greensburg Administrator Steve Hewitt, who lost his home, estimated 95 percent of the town of 1,500 was destroyed.

None of Greenburg's 1,500 residents is allowed back in — that includes Carig Morford.

Morford and his family huddled in their basement as winds of nearly 205 miles and hour flattened their home, reports CBS News correspondent Hari Sreenivasan. With lights from their cell phones, they crawled out to find a wasteland.

The Federal Emergency Management Agency was bringing in travel trailers to house some of the town's residents, said FEMA regional administrator Dick Hainje. There was no indication when people would be able to move in to the trailers because the area was choked with debris and the town had no clean water.

"There's a certain spirit in the Midwest of our country, a pioneer spirit that still exists, and I'm confident this community will be rebuilt," Bush said.

Some residents were less optimistic.

School superintendent Darin Headrick said classes will be canceled for the rest of the academic year, with graduation being held elsewhere. When school resumes in August, the district, which has about 300 students, will hold classes in other communities.

"Our teachers will have jobs; our kids will have classrooms to attend," he promised. "This is going to be a huge hurdle for people to overcome, but it will also be a huge opportunity."

The Greensburg twister late Friday was part of a storm front that also spawned tornadoes in parts of Illinois, Oklahoma, South Dakota and Nebraska, though most damage elsewhere was minimal, officials said.

A second round of storms massed over the Plains on Saturday, firing off tornadoes from Oklahoma to South Dakota, which had at least 20 twisters, the weather service said.

Most of Saturday's tornadoes caused only scattered damage to farm outbuildings, but at least eight homes were destroyed and one person was injured in western Oklahoma, the state emergency management department said. Sweetwater was hardest hit, with three homes destroyed, the roof torn off the local school and other buildings damaged.