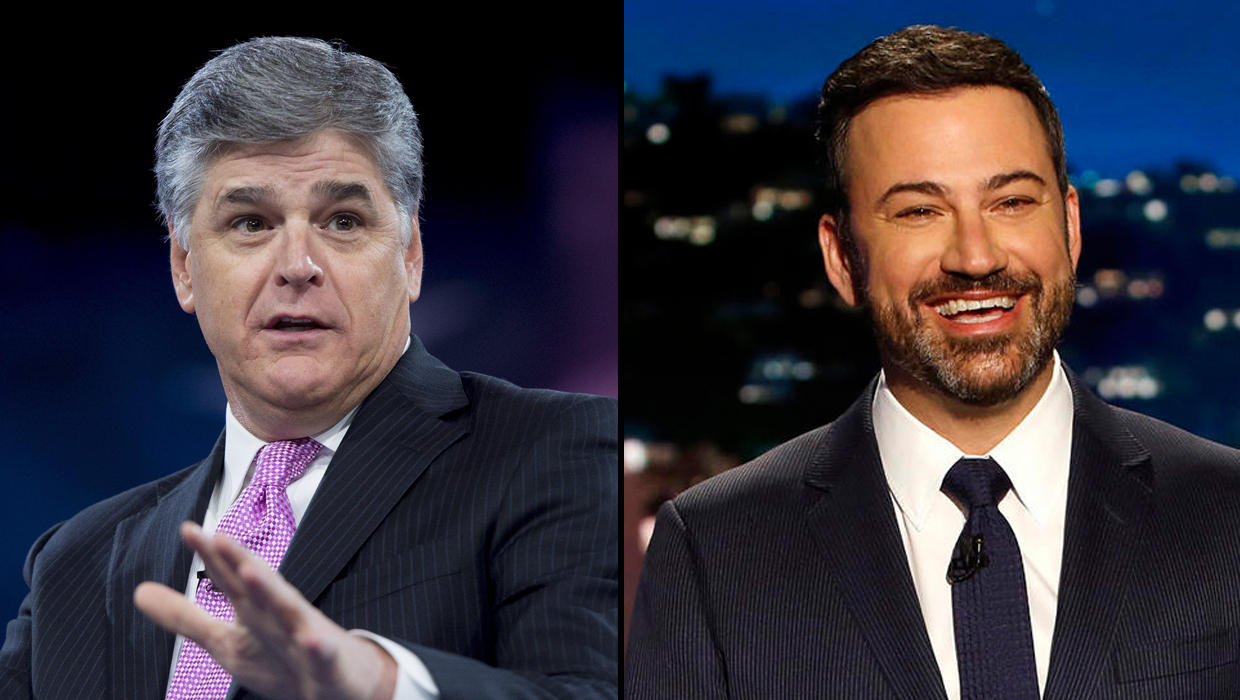 NEW YORK -- Fox News Channel host Sean Hannity is vowing to continue his attacks on ABC late-night comic Jimmy Kimmel until Kimmel apologizes for a segment in which he joked about first lady Melania Trump's accent. The dispute between the television personalities is unusually vitriolic, with Hannity calling Kimmel a "sick, twisted, creepy, perverted weirdo" during his Fox News show on Friday.

Kimmel, who had no show of his own on Friday, returned fire via Twitter. ABC officials had no immediate response to a request for comment on Saturday.

With late-night comedy almost uniformly opposed to President Trump and political talk dominated by conservatives, Kimmel and Hannity were playing to their audiences. The root of this flare-up was a Kimmel segment on his Monday show in which he played a film clip of Melania Trump, who was born in Slovenia, reading to children at a White House Easter celebration and mocked her accent.

"Dees and dat," Kimmel repeated, with a laugh.

Kimmel turned to his show sidekick, Guillermo Rodriguez, and said, "you could be first lady of the United States."

That angered Hannity, cable television's most fervent supporter of the Republican president.

Hannity's initial attack on Kimmel, calling him an "ass clown," was enthusiastically countered by Kimmel, who said Hannity was the "whole ass circus."

"Game on," Hannity said on Friday.

He rolled a series of Kimmel clips, mostly from the comedian's days as a co-host of Comedy Central's "The Man Show," that featured segments showing Kimmel with an exaggerated fake erection, asking women to find something hidden in his pants and going up to random women in the street asking if they wanted to have sex with him. He also showed a clip of Kimmel in blackface, imitating basketball player Karl Malone.

"I don't take joy in this, but I have just had it with the unrelenting hypocrisy," Hannity said. "It's way bigger than Sean Hannity and Jimmy Kimmel."

Kimmel, on Twitter, thanked Hannity for a trip down memory lane. He said the idea that Hannity would call anyone a pervert while he was "slobbering over" Mr. Trump is, "to quote a fella you love very much, 'sad.'"

When Mr. Trump was the Republican presidential nominee, a 2005 "Access Hollywood" tape of him talking about fame enabling him to grope and try to have sex with women emerged, and he later apologized.

Many of the insults Hannity and Kimmel traded were off-color. They needled each other for their ratings: Kimmel is third behind Stephen Colbert and Jimmy Fallon among late-night comics, while Hannity lost his cable news ratings lead to Rachel Maddow last month.

"What you don't seem to realize is that I LOVE this," Kimmel wrote on Twitter. "I guess that's one of my perversions."