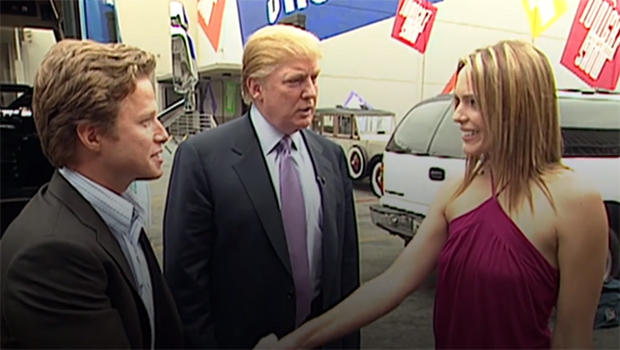 Billy Bush reminded everyone Sunday that it was President Trump's voice on the damning "Access Hollywood" tape that was leaked during the 2016 presidential election, the former television host confirmed in a New York Times op-ed.

Bush penned the piece amid reports that the president is casting doubt it was his own words on the 2005 recording of him saying he "grabs women by the p****."

"Of course he said it. And we laughed along, without a single doubt that this was hypothetical hot air from America's highest-rated bloviator," he wrote. "Along with Donald Trump and me, there were seven other guys present on the bus at the time, and every single one of us assumed we were listening to a crass standup act. He was performing. Surely, we thought, none of this was real. We now know better."

The tape, released mere weeks before the presidential election, recorded an unedited conversation between Mr. Trump and Access Hollywood host Billy Bush in which the future president used sexist and disparaging language about women as Bush laughed along. The tape opened up the future president to allegations of sexual assault, and cost Bush his job at NBC News.

At the time, Mr. Trump apologized for his repulsive remarks. However, the president has told aides and at least one Republican senator that he claims the tape may have been doctored, according to a New York Times report published Tuesday.

That struck a chord with Bush, who fired back at the president.

"President Trump is currently indulging in some revisionist history, reportedly telling allies, including at least one United States senator, that the voice on the tape is not his," he wrote. "This has hit a raw nerve in me."

Bush went on to voice his support for the 17 women who have publicly accused Mr. Trump of sexual misconduct.

"To these women: I will never know the fear you felt or the frustration of being summarily dismissed and called a liar, but I do know a lot about the anguish of being inexorably linked to Donald Trump," Bush wrote. "You have my respect and admiration. You are culture warriors at the forefront of necessary change."

In a comeback of sorts, Bush is scheduled to appear on "The Late Show with Stephen Colbert" on Monday night on CBS.