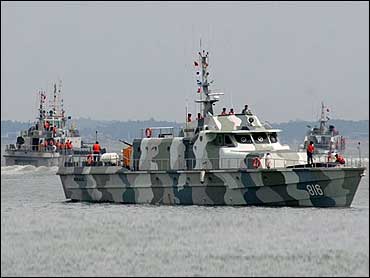 The number of pirate attacks worldwide hit a six-year low in the first half of 2005, but Iraq and Somalia emerged as increasingly perilous hotspots for commercial ships, a maritime watchdog said Wednesday.

Globally, 127 vessels were attacked from January to June, a 30 percent drop from 182 cases in the same period last year, the International Maritime Bureau said in a report released by its piracy watch center in Kuala Lumpur.

It was the lowest first-half figure since 1999, the British-based bureau reported. No seafarers have been killed by pirates so far in 2005 compared to 30 by this time last year, the report said. Thirteen crewmembers were injured, down from 44 in the first six months of 2004.

The report offered no reasons for the declines.

But the International Maritime Bureau warned of "a new and worrying trend" of armed robberies in Iraqi waters, noting that four "serious incidents" were reported there between April and June, despite the presence of U.S.-led coalition naval ships in the area.

Before this year, "attacks in and around Iraq were almost nonexistent," the bureau noted. It did not give details on why Iraqi waters have become more dangerous.

Security also worsened dramatically off Somalia's east coast, where bandits with guns and grenades attacked eight vessels and sometimes seized hostages for ransom. Only one attack occurred in Somalia between January and June last year.

In June, pirates seized a ship carrying U.N. food aid to tsunami victims in Somalia, and they have continued to hold the crew of 10 hostage. The ship was carrying 937 tons of rice donated by Japan and Germany for Somalia's 28,000 tsunami victims.

Indonesia's waters remained the world's most pirate-infested, though the number of attacks across the country's sprawling archipelago so far this year slipped to 42, one-third of the worldwide total, compared to 50 in the first half of 2004.