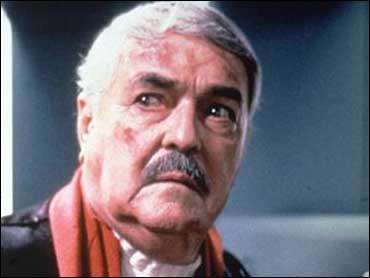 He made his name in Hollywood beaming his colleagues back to the safety of the Enterprise on "Star Trek." Now, actor James Doohan's family is hoping to beam him up to the "final frontier" that Doohan's character "Scotty" loved so dearly.

The actor, who died Wednesday at age 85, had told relatives he wanted his ashes blasted into outer space, as was done for "Star Trek" creator Gene Roddenberry.

"He'll be there with his buddy, which is wonderful," said Doohan's agent and longtime friend, Steve Stevens.

Doohan died at his home in Redmond, Washington, with his wife of 31 years, Wende, at his side. He had retired from public events last year, not long after announcing he had Alzheimer's disease.

Houston-based Space Services Inc., which specializes in space memorials, plans to send a few grams of Doohan's ashes aboard a rocket later this year. The remains, which will be sealed in an aluminum capsule, will eventually burn up when they re-enter Earth's atmosphere.

It should be a fitting finale for an actor who, as the Starship Enterprise's frazzled chief engineer saved the Enterprise almost every week from blowing up, burning up or being overrun by renegade aliens when the warp drive, the phasers, the shields, the power cells or some other futuristic collection of gadgets failed.

As the man who commanded the Enterprise's particle beam transporter, Doohan's character also inspired the phrase, "Beam me up, Scotty." Capt. Kirk and other members of the Enterprise crew never really issued the order quite that way, however, until the fourth "Star Trek" film when Kirk said, "Scotty, beam me up."

A master of dialects from his early years in radio, the Canadian-born Doohan experimented with seven different accents for the hard-pressed engineer.

"The producers asked me which one I preferred," Doohan recalled 30 years later. "I believed the Scot voice was the most commanding. So I told them, 'If this character is going to be an engineer, you'd better make him a Scotsman."'

Doohan was born March 3, 1920, in Vancouver, British Columbia, the youngest of four children of William Doohan, a pharmacist, veterinarian and dentist, and his wife, Sarah. He wrote in his autobiography, "Beam Me Up, Scotty," that his father was a drunk who made life miserable for his wife and children.

At 19, he escaped the turmoil at home by joining the Canadian army, where he became a lieutenant in the artillery and was among the Canadian forces that landed on Juno Beach on D-Day.

After the war, Doohan enrolled in a drama class in Toronto on a whim. He showed promise and won a two-year scholarship to New York's famed Neighborhood Playhouse, where fellow students included Leslie Nielsen, Tony Randall and Richard Boone.

His commanding presence and booming voice brought him steady work as a character actor in films and television in Canada and the United States. Then came "Star Trek" and fans forever screaming "Beam me up, Scotty."

Married three times, Doohan was the father of nine children.

"A long and storied career is over," William Shatner, who played Kirk, said Wednesday.