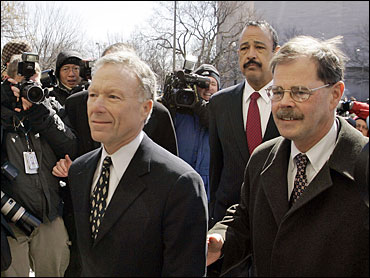 
Former White House official I. Lewis "Scooter" Libby's sentencing brief, the one in which he pleads for leniency and probation for his crimes, reads more like the text of a speech likely to be given at his funeral, years hence, when all the king's horses and all the king's men congregate to see him off for the sweet hereafter. And, as eulogies go, the narrative is quite compelling: Libby was indeed involved in a lot of things, many of them good, in his long career in and out of high-powered politics.

Just read the very first lines — the first few words! — from the beginning of the brief and tell me you don't hear Bach playing softly in the background: "Distinguished public servant. Generous mentor. Selfless friend. Devoted father. This is the rich portrait of Mr. Libby that emerges. … His dedication to promoting freedom abroad and keeping American citizens safe at home is beyond question. Mr. Libby has also earned a reputation for treating people fairly and kindly and comforting those who are distressed. He has avoided the Washington limelight to focus on nurturing his young children." And remember, dear friends, there will be a light buffet available following the service.

When read today, however, while Libby is still very much alive and kicking on the eve of his sentencing for obstruction of justice and perjury, Libby's pleas read like unintended parody. His lawyers, for example, write earnestly about his "great contributions to the public interest," but we know that the jury convicted Libby of lying to a grand jury and the feds about the disclosure of the name of a covert CIA agent. Libby's attorneys also remind U.S. District Judge Reggie B. Walton that their client "has demonstrated strong moral character," even though the judge and everyone else now knows precisely how and to what extent Libby tried to use the media to do the White House's dirty work against Valerie Plame Wilson and her husband, Joe Wilson.

"Mr. Libby is known for his fairness and generosity," the defense lawyers write, and "for his caring and unselfish nature." They claim that "his concern for the well-being of others extends beyond the boundaries of his community and even the borders of his country." And, they, add, "he treats everyone with respect." Everyone, that is, except evidently grand jurors, federal investigators, CIA agents, journalists and political adversaries of the Bush administration. And on and on it goes, one toast-type moment after another, buttressed by segments of letters of support offered no doubt by some of the most important politicians and statesmen of our time.

The defense brief is striking because it does not contain the language of politics, let alone the language of the law. It contains instead this series of pleas, one after another, that you might expect to hear if you happened to arrive at Heaven's Gate while St. Peter was interrogating someone hoping to gain entrance to the Kingdom. I don't blame Libby's lawyers for writing it this way; they figure they are going to go down with their best argument, which is that Libby's extraordinary public service ought to count for and not against him when the judge determines his fate. And I also don't blame the defense team for blaming the media and for trying to turn their client himself into a victim of the CIA leak investigation. What else are they going to argue?

But special prosecutor Patrick J. Fitzgerald gets it — and so, too, I believe, will Judge Walton. Libby's grand career probably won't help him now that he is a felon; it probably works against him. If Libby had been convicted of grand larceny, or even a violent crime, his lawyers might have been better able to argue to the judge that the misdeeds were an anomaly in an otherwise productive and exemplary life. But Libby, an attorney, was not convicted of some random crime. He was convicted of something that not only goes to the heart of what it means to be a lawyer but what it means to hold high office, too. He was convicted of subverting the very rule of law he was sworn to uphold.

Libby's stature in government and the responsibility he was given and for a time deserved, imposed upon him an even greater duty to respect and uphold the law. The long list of credits and credentials his lawyers offer as proof that he deserves leniency prove instead that he should have known better, and done much better, when confronted by the feds and grand jurors. And the glittering resume laid up before the judge begs the central question of the Libby trial: how could such a sharp man suddenly lose his memory about his role in important events that were at the heart of a years-long controversy? It just doesn't add up. That's why I think Libby will get sentenced to prison time when Judge Walton gets the last word.

As Fitzgerald pointed out in the government's sentencing brief, Libby could have been an upright guy and told the truth when asked about the Plame leak, or he could have even exercised his Fifth Amendment right to remain silent. These options might have truly supported the defense claim that Libby is a man of "strong moral character" — but, of course, they would not have helped Libby or his patrons at the White House face the political expediencies of the day. It was easier to use the media to anonymously slime Plame and Wilson and then plead a lack of memory about the shoddy affair when the law came calling.

Libby chose a path that is common in politics. There are many other men and women of so-called "strong moral character" working in Washington who are called upon every day to do sleazy things to one another as part of their jobs in and out of government. Sometimes the law catches up with these people; usually it doesn't. But here's hoping anyway that the next honorable man of government convicted of a felony doesn't use the achievements of his high office to excuse or diminish his low work.