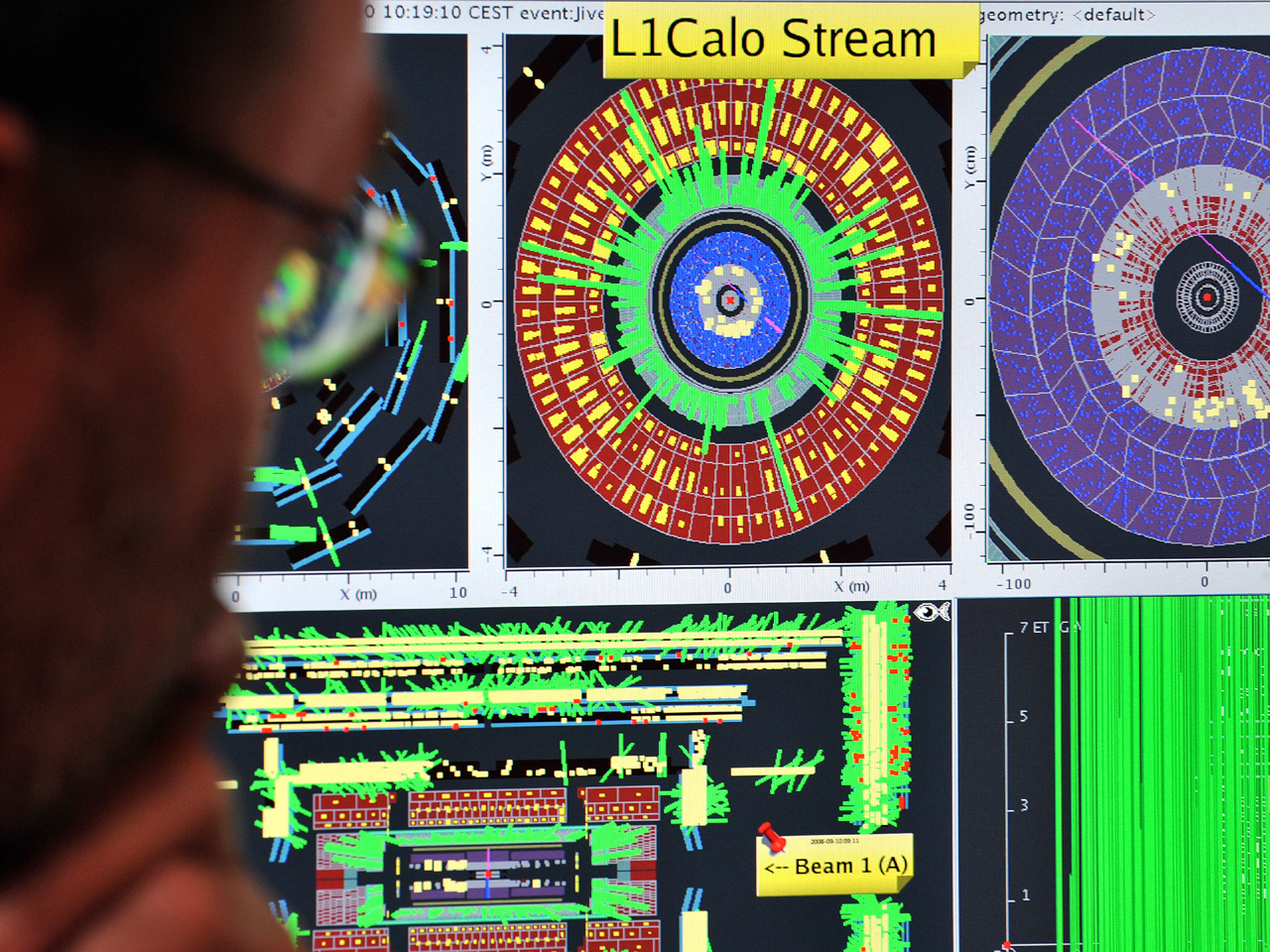 (AP) GENEVA - Scientists working at the world's biggest atom smasher plan to announce Wednesday that they have gathered enough evidence to show that the long-sought "God particle" answering fundamental questions about the universe almost certainly does exist.

But after decades of work and billions of dollars spent, researchers at the European Organization for Nuclear Research, or CERN, aren't quite ready to say they've "discovered" the particle.

Instead, experts familiar with the research at CERN's vast complex on the Swiss-French border say that the massive data they have obtained will essentially show the footprint of the key particle known as the Higgs boson — all but proving it exists — but doesn't allow them to say it has actually been glimpsed.

It appears to be a fine distinction.

Senior CERN scientists say the two independent teams of physicists who plan to present their work at CERN's vast complex on the Swiss-French border on July 4 are about as close as you can get to a discovery without actually calling it one.

"I agree that any reasonable outside observer would say, 'It looks like a discovery,'" British theoretical physicist John Ellis, a professor at King's College London who has worked at CERN since the 1970s, told The Associated Press. "We've discovered something which is consistent with being a Higgs."

CERN's atom smasher, the $10 billion Large Hadron Collider, has been creating high-energy collisions of protons to help them understand suspected phenomena such as dark matter, antimatter and ultimately the creation of the universe billions of years ago, which many theorize occurred as a massive explosion known as the Big Bang.

(Below, watch CBS' "60 Minutes" visit the Large Hadron Collider for a story broadcast in 2008)

The discovery of the Higgs boson won't change people's lives, but will help explain the underpinnings of the universe. It would confirm the standard model of physics that explains why fundamental particles have mass. Those particles are the building blocks of the universe. Mass is a trait that combines with gravity to give an object weight.

The phrase "God particle," coined by Nobel Prize-winning physicist Leon Lederman, is used by laymen, not physicists, more as an explanation for how the wonders of the subatomic universe work than how it all started.

Rob Roser, who leads the search for the Higgs boson at the Fermilab in Chicago, said: "Particle physicists have a very high standard for what it takes to be a discovery," and he thinks it is a hair's breadth away.

Rosen compared the results that scientists are preparing to announce Wednesday to finding the fossilized imprint of a dinosaur: "You see the footprints and the shadow of the object, but you don't actually see it."

Though an impenetrable concept to many, the Higgs boson has until now been just that — a concept intended to explain a riddle: How were the subatomic particles, such as electrons, protons and neutrons, themselves formed? What gives them their mass?

The answer came in a theory first proposed by physicist Peter Higgs and others in the 1960s. It envisioned an energy field where particles interact with a key particle, the Higgs boson.

The idea is that other particles attract Higgs bosons and the more they attract, the bigger their mass will be. Some liken the effect to a ubiquitous Higgs snowfield that affects other particles traveling through it depending on whether they are wearing, metaphorically speaking, skis, snowshoes or just shoes.

Officially, CERN is presenting its evidence at a physics conference in Australia this week, but plans to accompany the announcement with meetings in Geneva. The two teams, ATLAS and CMS, then plan to publicly unveil more data on the Higgs boson at physics meetings in October and December. Each of the teams involves thousands of people working independently from one another, to ensure accuracy.

Scientists with access to the new CERN data say it shows with a high degree of certainty that the Higgs boson may already have been glimpsed, and that by unofficially combining the separate results from ATLAS and CMS it can be argued that a discovery is near at hand. Ellis says at least one physicist-blogger has done just that in a credible way.

CERN spokesman James Gillies said Monday, however, that he would be "very cautious" about unofficial combinations of ATLAS and CMS data. "Combining the data from two experiments is a complex task, which is why it takes time, and why no combination will be presented on Wednesday," he told AP.

But if the calculations are indeed correct, said John Guinon, a longtime physics professor at the University of California at Davis and author of the book "The Higgs Hunter's Guide," then it is fair to say that "in some sense we have reached the mountaintop."

Sean M. Carroll, a California Institute of Technology physicist flying to Geneva for the July 4th announcement, said that if both ATLAS and CMS have independently reached these high thresholds on the Higgs boson, then "only the most curmudgeonly will not believe that they have found it."