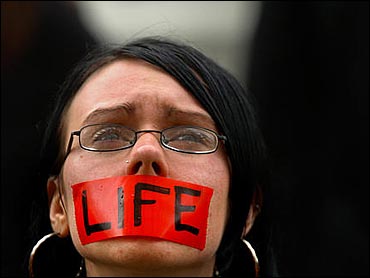 Doctors removed Terri Schiavo's feeding tube Friday despite an extraordinary, last-minute push by Republicans on Capitol Hill to use the subpoena powers of Congress to save the severely brain-damaged woman.

It is expected that it will take one to two weeks for Schiavo, 41, to die, provided no one intercedes and gets the tube reinserted.

The tube has twice been removed in the past, but was re-inserted within days in both cases. Similar appeals are expected to continue in the current case.

The latest removal came amid a flurry of maneuvering by Schiavo's parents, state lawmakers and Congress to keep her alive. Committees in the Republican-controlled Congress issued subpoenas for Schiavo, her husband, and her caregivers demanding that they appear at hearings in the coming weeks.

But the judge presiding over the case refused a request from House attorneys to delay the removal, which he had previously ordered to take place at 1 p.m. EST.

"It was odious, it was shocking, it was disgusting and I think all Americans should be very alarmed about that," he said at a news conference.

Felos said Michael Schiavo was not in the room when feeding tube was disconnected but that he later sat at his wife's bedside.

"I am told prayers were said, and the tube was pulled without incident," Felos said.

The development signals that an end may be near in a decade-long family feud between Schiavo's husband and her devoutly Roman Catholic parents, Bob and Mary Schindler. The parents have been trying to oust Michael Schiavo as their daughter's guardian and keep in place the tube that has kept her alive for more than 15 years.

"It looks like we are reaching the point of finality," said CBSNews.com Legal Analyst Andrew Cohen. "Terri Schiavo's parents still may file petitions here and there but there don't appear to be any legal arguments they could make that they haven't already made that would change the dynamic here."

Michael Schiavo says his wife told him she would not want to be kept alive artificially. Her parents dispute that, saying she could get better and that their daughter has laughed, cried, smiled and responded to their voices. Court-appointed physicians testified her brain damage was so severe that there was no hope she would ever have any cognitive abilities.

Several right-to-die cases across the nation have been fought in the courts in recent years, but few, if any, have been this drawn-out and bitter.

The case has garnered attention around the world and served as a rallying cry for conservative Christian groups and anti-abortion activists, who flooded members of Congress and Florida legislators with messages seeking to keep Schiavo alive.

Outside Schiavo's hospice, about 30 people keeping vigil dropped to their knees in prayer when word spread of the judge's ruling calling for removal of the tube.

"What can wash away our sins? Nothing but the blood of Jesus," they sang. Messages on protest signs included "Impeach Greer.com," a reference to the judge, and "Execution — It's Not Just for the Guilty Anymore."

But Rep. Henry Waxman of California, senior Democrat on the Government Reform Committee, called the subpoenas a "flagrant abuse of power" and amounted to Congress dictating the medical care Terri Schiavo should receive.

Schiavo suffered severe brain damage in 1990 when a chemical imbalance apparently brought on by an eating disorder caused her heart to stop beating for a few minutes. She can breathe on her own, but has relied on the feeding and hydration tube to keep her alive.

Both sides accused each other of being motivated by greed over a $1 million medical malpractice award from doctors who failed to diagnose the chemical imbalance.

The Schindlers also said that Michael Schiavo wants their daughter dead so he can marry his longtime girlfriend, with whom he has young children. They have begged him to divorce their daughter, and let them care for her.

The tangled case has encompassed at least 19 judges in at least six different courts.

In 2001, Schiavo went without food and water for two days before a judge ordered the tube reinserted when a new witness surfaced.

When the tube was removed in October 2003, her parents and two siblings frantically sought intervention from Gov Jeb. Bush to stop her slow starvation. The governor pushed through "Terri's Law," and six days later the tube was reinserted.

That set off a new round of legal battles which culminated in September 2004 with the Florida Supreme Court ruling that Bush had overstepped his authority and declared the law unconstitutional.

The U.S. Supreme Court has been unwilling to hear arguments in the case.

On Feb. 25, Circuit Judge George Greer gave Michael Schiavo permission to order the removal of the feeding tube Friday, when he also turned back the last-ditch congressional effort.

"I have had no cogent reason why the (congressional) committee should intervene," Greer told attorneys in a conference call, adding that last-minute action by Congress does not invalidate years of court rulings.

The family and lawmakers continued with their fight in recent weeks.

In Tallahassee, the Florida House on Thursday passed a bill to block the withholding of food and water from patients in a persistent vegetative state who did not leave specific instructions on their care. Hours later, however, the Senate defeated a different measure 21-16.