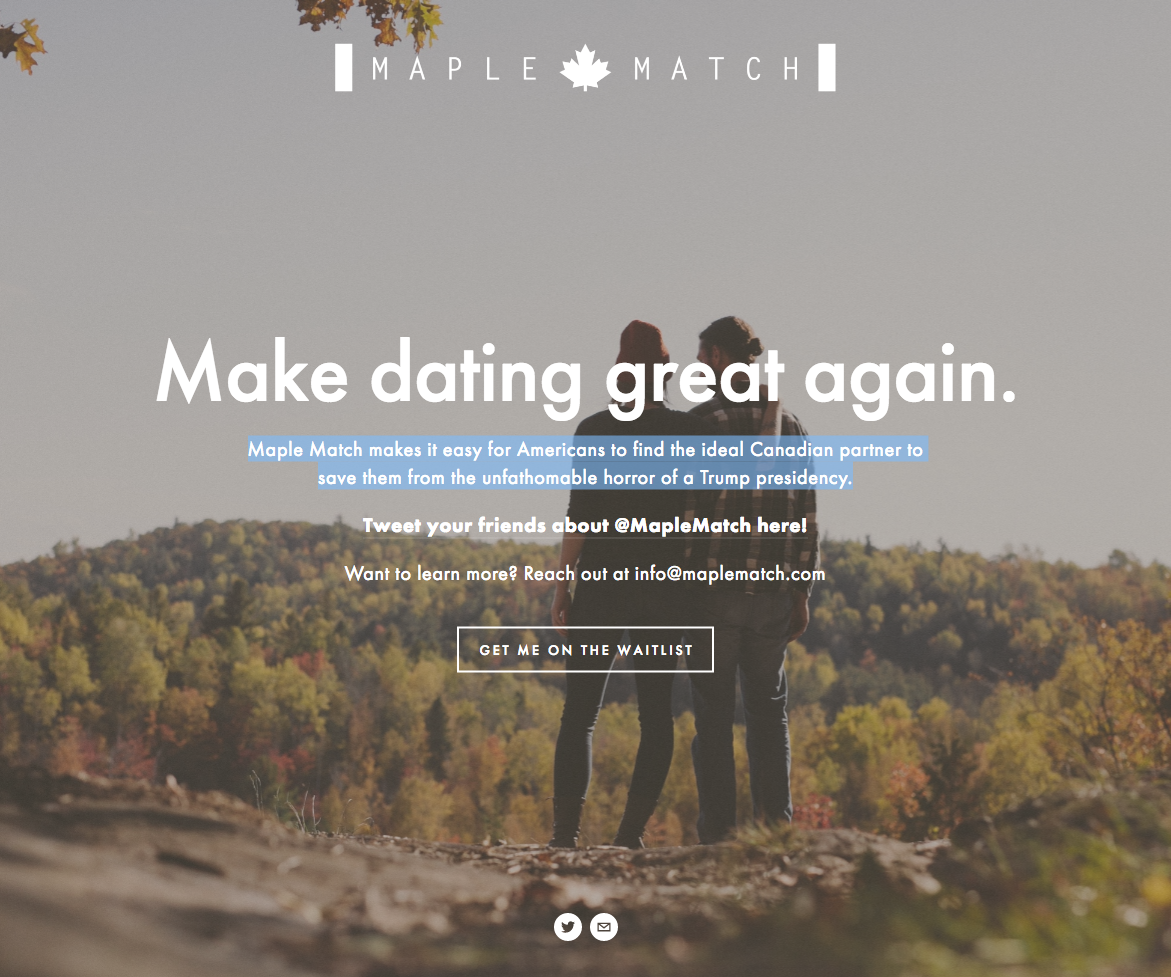 Looking for love and an escape from Donald Trump, eh? Both might be waiting for you in Canada.

A new dating site, called "Maple Match," aims to take that oft-repeated threat to move to Canada after every presidential election and make it a reality by pairing ready-to-flee Americans off with a Canadian partner up North.

"Make dating great again," the site's tagline reads. "Maple Match makes it easy for Americans to find the ideal Canadian partner to save them from the unfathomable horror of a Trump presidency."

The site is the creation of Joe Goldman, a 25-year-old Texan who splits his time between D.C. and Austin. Goldman said he's "always been interested in Canada," and that growing up in Texas--around "a lot" of Canadians -- has made him curious about the United States' next-door neighbor.

"Americans and Canadians -- I mean, we're different countries, but were not that different," Goldman said.

He referenced President Obama's comments during Canadian Prime Minister Justin Trudeau's state visit to Washington, when Obama said the United States and Canada are like "one big town."

"Why shouldn't people in this 'big town' date?" Goldman asked.

According to Canada's immigration laws, marrying a Canadian doesn't give someone immediate citizenship--but Canadian citizens can sponsor their spouses for permanent residency in the country, which also allows them to work there.

Maple Match has yet to begin pairing up Americans and Canadians, and Goldman said the company is still figuring out what form that will take. Still, "tens of thousands" of people have signed up since the site launched -- and the site's page views are now in the "hundreds of thousands."

The site is hoping to begin matching people as soon as possible, Goldman added, noting that there has been enthusiasm about the prospect from both Canadians and Americans who've signed up.

Maple Match is the latest in what seems to be a growing cottage industry of companies or campaigns to help Americans flee the country should Trump be elected in November. Earlier this year, a local radio host on Cape Breton Island in Nova Scotia created a site encouraging Americans to move there if they'd like to avoid Trump's America.

"There's this excitement about building understanding between Americans and Canadians," Goldman said.