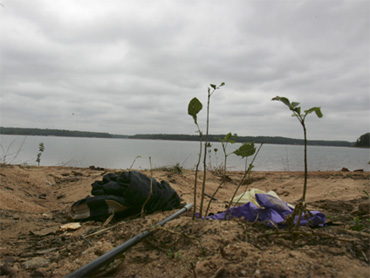 David Condon died broke and alone in a zipped-up tent on the banks of a South Carolina lake, his stomach empty and his lungs filling with fluid.

His friends and family hadn't seen the bright but reclusive Civil War buff in more than two months. He lost his job as a program coordinator at the local museum last year, fell behind on his rent and seemed to retreat even more into himself than usual.

Sometime in early July he disappeared. On Labor Day weekend, a group of college kids vacationing at a condo complex a few hundred yards from his tent found his body. The local coroner said he died of pneumonia, made worse by malnutrition. He was dehydrated and had lost 50 pounds in a few months.

Now those who knew him are left to wonder why he never reached out for help. His best friend, Craig Drennon, saw no sign Condon was having problems when the two got together nearly every week to drink beers and play backgammon.

"That's what's so baffling to me," said Drennon, an athlete who became fast friends with the bookworm Condon in 1990 at Limestone College in nearby Gaffney. "To be such a great friend with him, I just don't know what happened. It's just like he took off. Maybe he was on an adventure."

The 39-year-old loved to hike and camp and often sought solitude. His friends are having trouble accepting that he might have needed help and never asked.

He ended up 10 miles down the road from his apartment in a tent on the shores of Lake Hartwell, where it was easily visible just yards from cars roaring by on the state Highway 24 bridge.

His grandfather once had a house there, and another friend who worked with him at the museum thinks it was a place that brought back good memories.

Three days after his body was found, the only signs of him were tent poles scattered around the bank amid plastic gloves used by paramedics. Two camp dishes the size of dessert plates were nearby, along with boxer shorts and socks.

Condon was nude when the students found him, likely because he was running a high fever. There was nothing in his stomach, and no sign of foul play or drug use, said Anderson County Deputy Coroner Charlie Boseman.

His driver's license listed him at 190 pounds, but Boseman said Condon weighed 140 when he died. That stunned Drennon, who said his friend looked normal when he last saw him two months earlier.

Drennon called police Aug. 1 after he hadn't heard from Condon in nearly three weeks. Condon's brother and father came from Massachusetts to search, but found nothing.

Visits to local homeless shelters and soup kitchens were fruitless. The missing person's report said Condon had been depressed in the past and may have stopped taking anti-seizure medicine. His family did not return messages from The Associated Press.

Condon and Drennon drifted apart after college, when Condon spent several years in Mississippi, but they became close again nine years ago when he came back to work at the college library. They met weekly to talk about movies and football - especially Condon's beloved New England Patriots.

Holly Waller, property manager for the apartment complex where Condon lived, saw him looking a bit more disheveled than usual a few weeks before he disappeared. He told her he was fine, but Waller said he was behind on the $500-a-month rent for his one-bedroom apartment. Two years earlier, his truck had been towed away because he couldn't afford repairs.

"I wished he would have come in and told me about the situation. I would have given him food, anything he needed to help him out," said Waller, who is organizing a food drive in his memory.

The help is needed in Anderson, which once thrived with textile mills but was ranked this year by Forbes magazine as the 10th worst small city in the U.S. to find a job. Unemployment in Anderson County was 12.5 percent in July, higher than the state average of 11.8 percent and above the national average of 9.7 percent for August. South Carolina hasn't fared much better - as of July, it had the nation's sixth-highest unemployment rate.

Condon never found another job after he left the museum, where he had worked for two years. He told Drennon he was laid off, but county records show he was fired for unsatisfactory work production. The museum director refused to give more details.

Dianne Brown, a friend and former co-worker who said she was fired the same time as Condon, stayed in touch with him after they left the museum, even though his phone was sometimes disconnected. She said he never asked her for help.

Condon also never shared his money woes with his best friend, who said the two were so close that Drennon would ask Condon for advice on what to get his wife for Christmas. Instead, they talked about good times and pie-in-the-sky dreams, like building their own canoes, putting them into the river just down the road and floating hundreds of miles to the ocean.

"Dave was a pretty interesting guy, very humble, a little shy when you first met him," Drennon said "But once you got to know him, he'd let it all hang out, full of wisdom a lot of fun."

Condon loved camping and hiking, the movie "Animal House" and the songs of Jimmy Buffet, said Brown, who doesn't want the way her friend died to be the main thing people recall about him.

"I don't want him to be remembered as the guy that died in a tent," she said, "because that's not who he was."