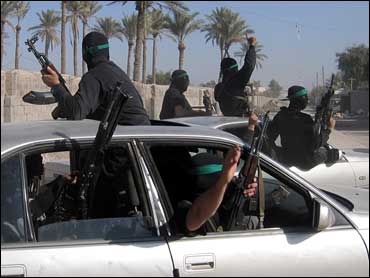 Private Saudi citizens are giving millions of dollars to Sunni insurgents in Iraq and much of the money is used to buy weapons, including shoulder fired anti-aircraft missiles, according to key Iraqi officials and others familiar with the flow of cash.

Saudi government officials deny that any money from their country is being sent to Iraqis fighting the government and the U.S.-led coalition.

But the U.S. Iraq Study Group report released Wednesday said Saudis are a source of funding for Sunni Arab insurgents. Several truck drivers interviewed by The Associated Press described carrying boxes of cash from Saudi Arabia into Iraq, money they said was headed for insurgents.

Two high-ranking Iraqi officials, speaking on condition of anonymity because of the issue's sensitivity, told the AP most of the Saudi money comes from private donations, called zaqat, collected for Islamic causes and charities.

Some Saudis appear to know the money is headed to Iraq's insurgents, but others merely give it to clerics who channel it to anti-coalition forces, the officials said.

In one recent case, an Iraqi official said $25 million (euro18.8 million) in Saudi money went to a top Iraqi Sunni cleric and was used to buy weapons, including Strela, a Russian shoulder-fired anti-aircraft missile. The missiles were purchased from someone in Romania, apparently through the black market, he said.

Overall, the Iraqi officials said, money has been pouring into Iraq from oil-rich Saudi Arabia, a Sunni bastion, since the U.S.-led invasion of Iraq toppled the Sunni-controlled regime of Saddam Hussein in 2003.

Saudi officials vehemently deny their country is a major source of financial support for the insurgents.

"There isn't any organized terror finance, and we will not permit any such unorganized acts," said Brig. Gen. Mansour al-Turki, a spokesman for the Saudi Interior Ministry. About a year ago the Saudi government set up a unit to track any "suspicious financial operations," he said.

But the Iraq Study Group said "funding for the Sunni insurgency comes from private individuals within Saudi Arabia and other Gulf states."

Saudi officials say they cracked down on zakat abuses, under pressure from the United States, after the Sept. 11, 2001, attacks on New York and Washington.

The Iraqi officials, however, said some funding goes to Iraq's Sunni Arab political leadership, who then disburse it. Other money, they said, is funneled directly to insurgents. The distribution network includes Iraqi truck and bus drivers.

Several drivers interviewed by the AP in Middle East capitals said Saudis have been using religious events, like the hajj pilgrimage to Mecca and a smaller pilgrimage, as cover for illicit money transfers. Some money, they said, is carried into Iraq on buses with returning pilgrims.

"They sent boxes full of dollars and asked me to deliver them to certain addresses in Iraq," said one driver, who gave his name only as Hussein, out of fear of reprisal. "I know it is being sent to the resistance, and if I don't take it with me, they will kill me."

He was told what was in the boxes, he said, to ensure he hid the money from authorities at the border.

The two Iraqi officials would not name specific Iraqi Sunnis who have received money from Saudi Arabia. But Iraq issued an arrest warrant for Harith al-Dhari, a Sunni opponent of the Iraqi government, shortly after he visited Saudi Arabia in October. He was accused of sectarian incitement.
Saudi Arabia is a key U.S. ally in the Middle East. The Iraq Study Group report noted that its government has assisted the U.S. military with intelligence on Iraq.

But Saudi citizens have close tribal ties with Sunni Arabs in Iraq, and sympathize with their brethren in what they see as a fight for political control — and survival — with Iraq's Shiites.

The Saudi government is determined to curb the growing influence of its chief rival in the region, Iran. Tehran is closely linked to Shiite parties that dominate the Iraqi government.

Saudi officials say the kingdom has worked with all sides to reconcile Iraq's warring factions. They have, they point out, held talks in Saudi Arabia with Shiite cleric Muqtada al-Sadr, whose militia is accused of killing Sunnis.

These officials say zakat donations are now channeled through supervised bank accounts. Cash donation boxes, once prevalent in supermarkets and shopping malls, have been eliminated.

"We hope that Saudi Arabia will keep the same distance from each and all Iraqi parties," Foreign Minister Hoshyar Zebari later told the AP.

On Nov. 27, a U.S. Air Force F-16 jet crashed while flying in support of American soldiers fighting Anbar province, a Sunni insurgent hotbed. The U.S. military said it had no information about the cause of the crash. Gen. William Caldwell, a U.S. military spokesman, said he would be surprised if the jet was shot down because F-16's have not encountered weapons capable of taking them down in Iraq.

But last week, a spokesman for Saddam's ousted Baath party claimed that fighters armed with a Strela missile had shot down the jet.

"We have stockpiles of Strelas and we are going to surprise them (the Americans)," Khudair al-Murshidi, the spokesman told the AP in Damascus, Syria. He would not say how the Strelas were obtained.

Saddam's army had Strelas; it is not known how many survived the 2003 war. The Strela is a shoulder-fired, low-altitude system with a passive infrared guidance system.

The issue of Saudi funding for the insurgency could gain new prominence as the Bush administration reviews its Iraq policy, especially if it seeks to engage Iran and Syria in peace efforts.

Bush's national security adviser, Stephen Hadley, wrote in a recent leaked memo that Washington should "step up efforts to get Saudi Arabia to take a leadership role in supporting Iraq, by using its influence to move Sunni populations out of violence into politics."

Last week, a Saudi who headed a security consulting group close to the Saudi government, Nawaf Obaid, wrote in the Washington Post that Saudi Arabia would use money, oil and support for Sunnis to thwart Iranian efforts to dominate Iraq if American troops pulled out. The Saudi government denied the report and fired Obaid.