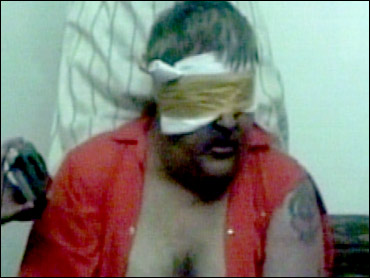 The Saudi government beheaded 52 men and one woman last year for crimes including murder, homosexuality, armed robbery and drug trafficking. But Saudis say that while Islam condones the punishment in one context, it condemns militants who decapitated hostages here and in Iraq.

The Saudi government says the punishment is sanctioned by Islamic tradition. State-ordered beheadings are performed in courtyards outside crowded mosques in major cities after weekly Friday prayer services.

A condemned convict is brought into the courtyard, hands tied, and forced to bow before an executioner, who swings a huge sword amid cries from onlookers of "Allahu Akbar!" Arabic for "God is great."

On Friday, outside the main mosque in the Saudi capital, Riyadh, a policeman standing in the scorching summer heat declared to worshippers: "There are no qisas today." Qisas is the Arabic word for Islamic-law punishments — which in the kingdom could mean beheadings or the amputation of limbs.

But Saudi clerics insist beheading is only allowed in the case of criminal convictions — not in the killing of innocents.

"No religion condones these acts," Abdul Muhsen al Obaiqan, a senior Islamic cleric in Riyadh, told The Associated Press. "They are against Islam and they tarnish the image of Muslims. No Muslim should show any sympathy for them."

Last week, al Qaeda-linked militants in Saudi Arabia decapitated American engineer Paul M. Johnson Jr. after warning they would kill him if the Saudi government did not release jailed comrades.

In Iraq this week, militants beheaded Kim Sun-il, a South Korean translator for a U.S. military supplier, and dumped his body between Baghdad and Fallujah. American businessman Nicholas Berg met a similar fate last month in Iraq. Both killings are blamed on the al Qaeda-linked movement of Abu Musab al-Zarqawi.

The beheadings were videotaped, photographed and posted on the Internet — a new tactic apparently aimed at increasing the shock value of the militants' campaign against Westerners.

Al Qaeda is thought to be trying to drive out foreigners, depriving the kingdom of a vital work force and undermining the rule of the Saud royal family.

Beheading has been nearly unknown in previous Middle East violence. The militants may have been seeking to give an Islamic veneer to the slayings — or they may have been taking a page from Islamic militant groups elsewhere. Beheadings have occurred in Algeria, Kashmir, Chechnya and the Muslim-dominated southern Philippines.

The beheadings of Johnson, Kim and Berg drew condemnations from Saudi officials, Islamic leaders and scholars throughout the Middle East.

Columnist Qenan al-Ghamdi wrote in the Al-Watan daily of Johnson's death, "Saudis were saddened by this crime because it was perpetrated in the name of Islam by some of their sons against a resident in their country and in such an ugly and despicable way."

Badr bin Nasser al Badr, a theology professor at Riyadh's Imam University, told the AP: "Our guests are protected by our faith, Islam. Their lives and property should be protected. Their blood and lives are as precious as ours."

"The killing of foreigners who are working and feel secure in Muslim countries ... is not sanctioned by Islam," said Lebanon's top Shiite Muslim cleric, Grand Ayatollah Sheik Mohammed Hussein Fadlallah.

Egypt's foremost religious leader, Mohammed Sayed Tantawi, told an Islamic conference in Yemen that "such beheadings and (the) mutilation of bodies stand against Islam and have nothing to do with Sharia."

But in Kuwait, Osama al-Menawer, a lawyer who defends fundamentalists, said beheading is "the least painful method (of execution)."

"Killing is killing. Incendiary bombs dropped on Palestinians and Iraqis are much worse," he said. "This is a state of war. Americans are invaders and they kill every day."

And on Islamic Internet forums, mostly used by radicals, beheading has been a popular topic in recent weeks, with many participants describing it as the "easiest" way to kill an American or a Saudi from the ruling family.