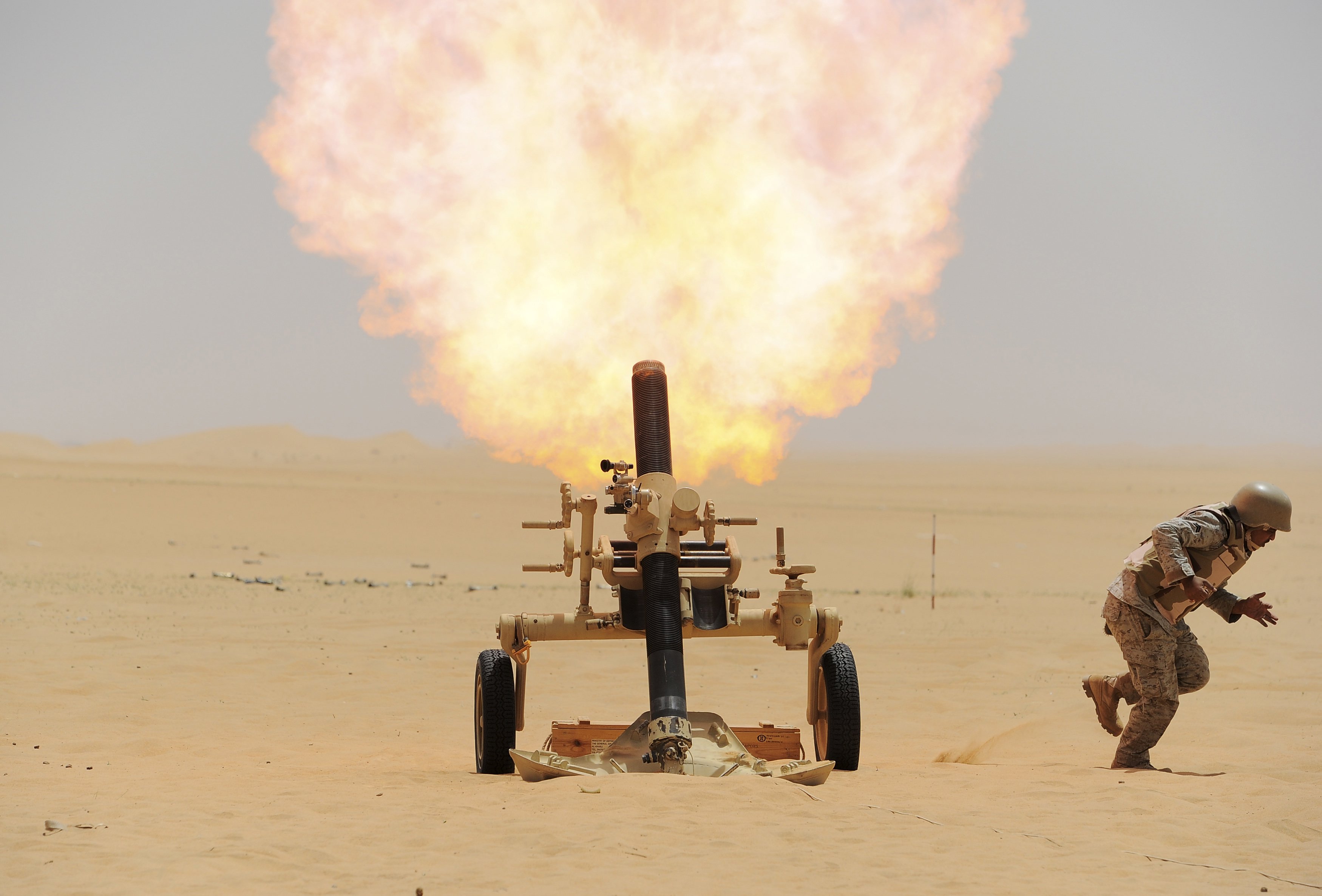 SANAA, Yemen - Saudi-led airstrikes targeted Iran-backed rebels and their allies in Yemen on Wednesday, hours after Riyadh declared an end to a nearly monthlong air campaign. The Shiite forces later said they would welcome United Nations-led peace talks to end a conflict that's killed hundreds without dislodging them from the capital.

The rebels, known as Houthis, say they call for a resumption of dialogue and any efforts under the auspices of the U.N. that lead to a peaceful compromise.

"We welcome any United Nations efforts that are on the side of peaceful solutions," Houthi spokesman Mohamed Abdul-Salam said in a statement, which came as thousands of angry Houthi supporters marched in the capital, Sanaa, denouncing what they described as "Saudi-American aggression."

The continuing Saudi-led strikes suggest that the U.S.-backed offensive, aimed at restoring Yemen's internationally recognized president, is entering a new phase in which military action will be scaled back but not halted.

"If there are any military movements that are suspicious on the ground, the coalition will attack it," said Riad Kahwaji, director of the Dubai-based Institute of Near East And Gulf Military Analysis. "There will be a support and backup for the (pro-Hadi forces) and those supporting the legal movement in Yemen."

The air raids hit rebel positions in the southern port of Aden and central city of Taiz as ground fighting between the rebels and their allies against supporters of exiled President Abed Rabbo Mansour Hadi continued in both areas, Yemeni officials said.

The capital, Sanaa, was calm, however, as residents experienced their quietest night in almost four weeks and did not wake up to new scenes of devastation. Late in the day, thousands of pro-Houthi demonstrators marched in the city.

The strikes in Taiz hit the Shiite rebels, known as Houthis, as they gathered at a military headquarters they control near the old airport to the city's southeast, officials said. Also targeted was the southern port city of Aden, where aircraft blasted rebel forces in outlying districts. In both areas, the Houthis are fighting alongside forces loyal to former President Ali Abdullah Saleh.

Street fighting continued in both cities, especially Taiz, where officials said pro-government forces control most of the city but have been in heavy combat with the rebels, killing dozens on both sides. In Aden, rebels fired mortars, said the officials, who spoke on condition of anonymity because they were not authorized to talk to journalists.

Iran has provided political and humanitarian support to the Houthis, but both Tehran and the rebels deny it has armed them. On Wednesday, Iran welcomed the Saudi decision to halt the operation codenamed "Decisive Storm" and launch a new one titled "Renewal of Hope."

"We believe this was a positive step," said Foreign Ministry spokeswoman Marzieh Afkham, adding that "political cooperation" by all parties is needed to resolve the Yemen crisis.

The Saudi-led air campaign, launched March 26, was aimed at crushing the Houthis and allied military units loyal to Saleh.

But the rebels and their allies have lost little ground, and Hadi remains in exile in Saudi Arabia. Aden, where he had established a temporary capital before fleeing the country last month, is gripped by fierce fighting. Al Qaeda's powerful local affiliate has exploited the chaos to seize the southeastern port city of Mukalla.

The U.S. welcomed the conclusion of the Saudi-led operation, saying it looked forward to a shift from military operations to a quick resumption of negotiations.

"We strongly urge all Yemeni parties, in particular the Houthis and their supporters, to take this opportunity to return to these negotiations as part of the political dialogue," National Security Council spokeswoman Bernadette Meehan said. "The Yemeni people deserve the opportunity to hold a peaceful debate about their new constitution, to participate in a credible and safe constitutional referendum, and to vote in free and fair national elections."

On Tuesday, Saudi Arabia declared "Decisive Storm" over and announced the start of a more limited military campaign aimed at preventing the rebels from operating.

Speaking at a news conference in Riyadh, coalition spokesman Brig. Gen. Ahmed Asiri said the heavy airstrikes would be scaled down, but did not confirm whether they would stop altogether.

He said the goals of the new operation are to prevent Houthi rebels from "targeting civilians or changing realities on the ground."

CBS News national security correspondent David Martin said the primary objective of the Saudi-led air campaign was to eliminate threats to the Kingdom, in the form of weapons -- captured by the Houthis from the Yemeni government -- which could reach targets in Saudi Arabia. According to Martin, the Saudis feel they have eliminated that threat to their homeland.

In an apparent goodwill gesture Wednesday, the rebels released from detention the country's Defense Minister Mahmoud al-Subaihi, the brother of Hadi and a third military commander. The Houthis had held the three for nearly a month. Wednesday evening, airport officials said a plane arrived in Sanaa to take al-Subaihi, Hadi's brother, and two army commanders, to Riyadh.

The move could reflect an imminent political deal between Hadi and the rebels and their allies.

The violence in Yemen has killed at least 944 people since the start of the airstrikes and wounded 3,500, the World Health Organization said Tuesday.

They said the militants were travelling in a car in Mukalla, the capital of Hadramawt province, where al Qaeda has recently made advances and struck deals with local tribesmen.

Yemen's chaos has forced the U.S. to scale back drone strikes on al Qaeda in the Arabian Peninsula, as the local affiliate is known. The group has carried out a number of failed attacks on the U.S. and claimed the deadly attack on the French satirical magazine Charlie Hebdo earlier this year.