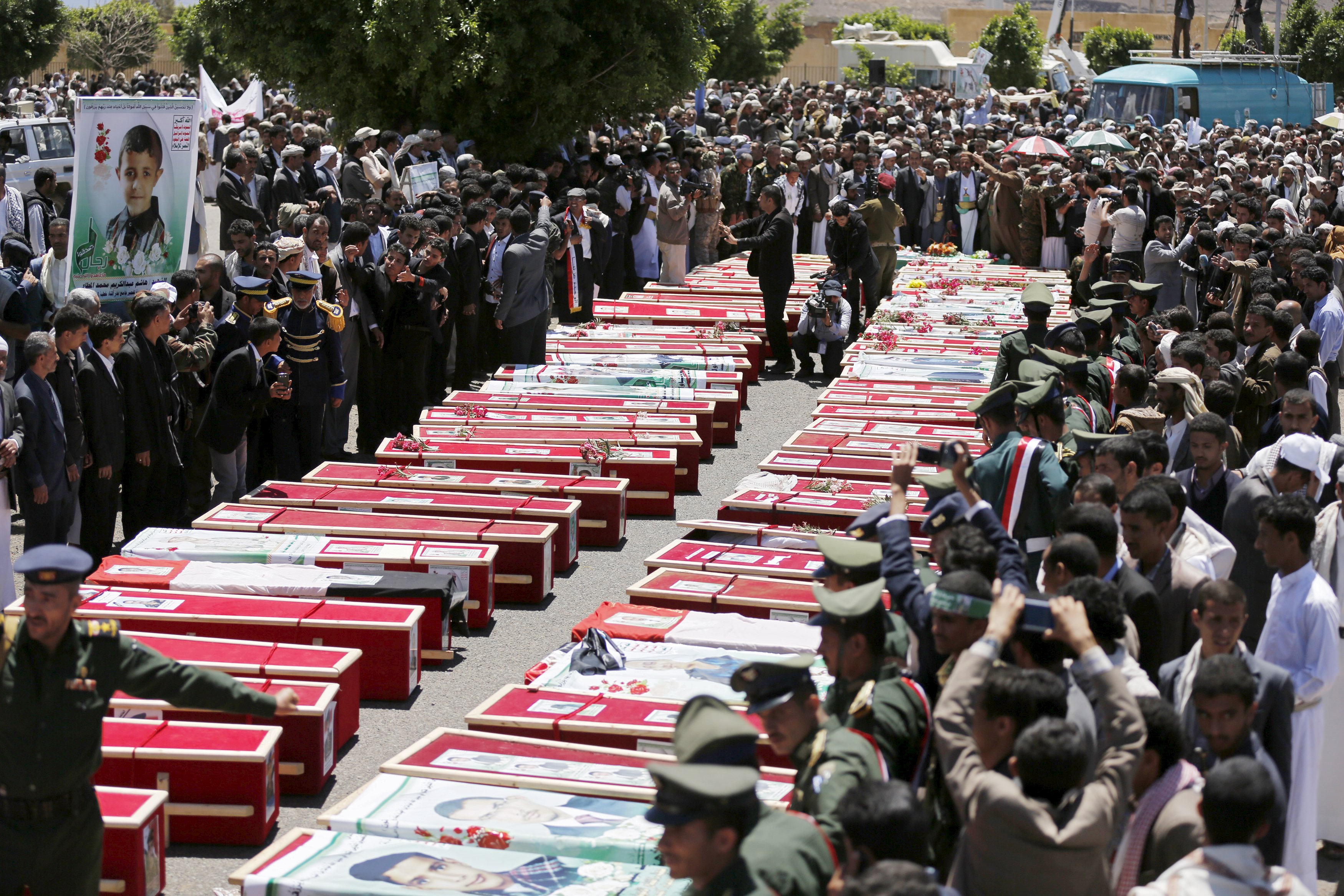 WASHINGTON -- Saudi Arabia began airstrikes Wednesday against Houthi rebel positions in Yemen, vowing that the Sunni kingdom will do "anything necessary" to restore a deposed government that has been routed by the Iranian-backed group.

In an unusual tableau, Saudi Arabia's ambassador to the United States announced the rare military operation by his country at a Washington news conference about a half-hour after the bombing began. The strikes started at 7 p.m. EDT, he said.

Loud, house-shaking explosions could be heard in the Yemen capital of Sanaa and fire and smoke could be seen in the night sky, according to an Associated Press correspondent whose home is near the military airbase in the capital.

The Houthis said in a statement to reporters that Saudi jets are hitting the military base, known as al-Duleimi, in Sanaa. They said they fired anti-aircraft missiles in response.

Ambassador Adel al-Jubeir said his government had consulted closely with the U.S. and other allies, but said the U.S. military was not directly involved in the operations.

The White House said Wednesday night that President Barack Obama has authorized logistical and intelligence support to the military operations.

"While U.S. forces are not taking direct military action in Yemen in support of this effort, we are establishing a joint planning cell with Saudi Arabia to coordinate U.S. military and intelligence support," National Security Council spokeswoman Bernadette Meehan said in a statement.

Al-Jubeir, speaking from a podium at the Saudi embassy, said nine other countries have joined the military coalition, but he declined to name them.

Five members of the Gulf Cooperation Council -- Saudi Arabia, United Arab Emirates, Kuwait, Qatar and Bahrain -- issued a statement saying they are answering the demands to intervene in Yemen militarily. Oman, the sixth member of the council, didn't sign on. In a separate statement, Egypt announced its political and military support.

"Having Yemen fail cannot be an option for us or our coalition partners," al-Jubeir said.

The Saudi strikes were the latest in a series of fast moving developments in Yemen -- a rugged, poor, isolated country that is home to an al-Qaida affiliate that has been the target of repeated American drone strikes.

Driven weeks ago from the capital by the Houthis, U.S.- and Saudi-backed Yemeni President Abed Rabbo Mansour Hadi abandoned the country Wednesday, leaving on a boat from the southern port of Aden, Yemeni security officials said. His departure came after Houthi air strikes rained down on his troops, a sign that rebels held air superiority and that Hadi's calls for an international no-fly zone had been disregarded. On the ground, the rebels were advancing toward his position.

Al-Jubeir said the Saudi airstrikes were designed "to prevent Yemen from falling into the hands of the Houthis," but the reality is that the capital and some of the country's main cities already have fallen to the group, and ground troops will be required to take them back. The ambassador said he didn't want to discuss military details.

It was unacceptable, Al-Jubeir said, that a "militia," as he called the Houthis, should have air power, along with "ballistic missiles, heavy weapons as well as military bases and ports."

Al-Jubeir recounted a series of diplomatic efforts to dissuade the Houthi from continuing their offensive. But, he said, they "have always chosen the path of violence."

He says the Saudis "will do anything necessary" to protect the people of Yemen and "the legitimate government of Yemen."

Hadi's departure illustrated how one of the most important American counterterrorism efforts has disintegrated. It also raised the specter of what could be a deeply destabilizing proxy war between Saudi Arabia and Iran. The Saudi announcement only reinforced that notion.

Three years ago, American officials hailed Hadi's ascension to power in a U.S.-brokered deal that ended the longtime rule of Ali Abdullah Saleh during the political upheaval of the Arab Spring. And just a few months ago, President Barack Obama was still calling Yemen a counterterrorism success story, even as the CIA warned that Iranian-backed Houthi rebels were growing restive in the north of the country.

Now, U.S. officials acknowledge their efforts against Yemen's dangerous al-Qaida affiliate are seriously hampered, with the American embassy closed and the last U.S. troops evacuated from the country over the weekend. Although the Houthis have seized control of much of the country and are avowed enemies of al-Qaida, they can't project power against the militants the way the Hadi government could with American support, officials say. And now they will be fighting the Saudis and their allies.

Al-Qaida in the Arabian Peninsula, or AQAP, is considered the terror group most dangerous to the U.S. because it successfully placed three bombs on U.S.-bound airlines, although none exploded. The chaos in Yemen will give the group breathing space, American officials acknowledge.

Beyond terrorism, the latest developments in Yemen have worrisome implications for a Middle East already wracked by Sunni-Shia conflict, experts say. Before the airstrikes began, Saudi Arabia bolstered its troop presence along its border with Yemen. It's unclear how Iran will view the Saudi military strikes.

"This is all about Sunni vs. Shia, Saudi vs. Iran," said Michael Lewis, professor at Ohio Northern University College of Law and a former Navy fighter pilot who watches Yemen closely. The U.S., he said, "can't be a disinterested observer. Nobody's going to buy that. What we needed to do was pick a side."