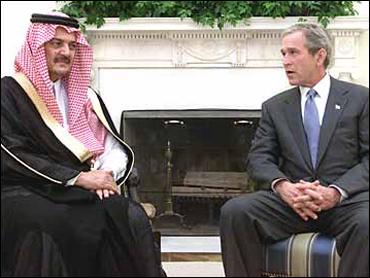 In a shift likely to put more pressure on Saddam Hussein, Saudi Arabia's foreign minister said Sunday that U.S. forces may have access to bases in the kingdom to attack Iraq - provided military action has United Nations endorsement.

Prince Saud al-Faisal called on the Baghdad regime to allow U.N. inspectors back into Iraq to ensure it is not developing nuclear, chemical or biological weapons.

Other Arab nations also pressed Iraq to comply with U.N. Security Council resolutions to avert a showdown with Washington, saying they wanted a diplomatic solution to avoid a conflict that could threaten stability in the Middle East.

Saudi Arabian leaders previously had ruled out any use of Saudi bases by U.S. forces to attack Iraq. But Saud said Sunday that if the Security Council authorized the use of force against Iraq, Saudi Arabia would go along.

"All signatories to the U.N. Charter, including Saudi Arabia, are obligated to abide by the decisions of the Security Council, in particular those taken under Chapter 7 of the Charter," he said in a statement.

Chapter 7 authorizes the use of force in the case of threats to international peace and security and requires all member nations to abide by such resolutions.

"Whatever threat Iraq poses, it is clear that the will of the international community is to remove that threat in a way that does not require the firing of a single shot or the loss of a single soldier," Saud said.

But once international consensus is reached, he added, the Iraqis will have to respond or "suffer the consequences."

In an interview with the London-based newspaper Al Hayat, Saud urged Saddam to quickly allow U.N. weapons inspectors back into Iraq to avoid a new Security Council resolution that could open the way for military action.

A senior Saudi official notes that the foreign minister's remarks show a "shift in the American position, not the Saudi position," a reference to ongoing efforts by the U.S. to rally support for a new U.N. resolution on Iraq.

The official, speaking on condition of anonymity, says Saud al-Faisal was talking only about implementation of a possible U.N. Security Council resolution against Iraq and not unilateral U.S. action.

"Saudi Arabia rejects any unilateral attack that has no international cover," said the diplomat, in a telephone interview from Riyadh.

President Bush demanded last week that the United Nations force Iraq to comply with resolutions requiring U.N. supervision of the destruction of Iraqi weapons of mass destruction. He warned that America will act, alone if necessary, if the Security Council doesn't.

Jordan, a neighbor of Iraq that faced an influx of refugees during the 1991 Gulf War and worries about the repercussions of another war, also called on Iraq to implement Security Council resolutions, including the return of U.N. weapons inspectors. Compliance would spare the region "the dire consequences" of war, Jordanian Foreign Minister Marwan Muasher told the U.N. General Assembly on Sunday.

Iraq's foreign minister, Naji Sabri, said late Saturday he hoped the crisis could be resolved without new action by the council.

U.N. inspectors who were seeking out the elements of Iraq's weapons projects left the country before U.S. and British airstrikes in 1998 and have not been allowed to return.

Saddam's regime maintains it has fulfilled all U.N. obligations and wants an end to U.N. sanctions imposed after the Iraqi army invaded Kuwait in 1990.

Although the Iraq crisis has taken center stage at the current session of the General Assembly, Arabs sought to address the Israeli-Palestinian conflict Sunday.

Syria's foreign minister accused the world of "blind bias" in dealing with Iraq while ignoring what he said was Israel's refusal to abide by similar international demands.

"Is it reasonable for the world to request Iraq implement Security Council resolutions while some assist Israel in being above international law?" Farouk al-Sharaa asked in a speech Sunday to the General Assembly, clearly referring to the United States, which Arabs consider Israel's main protector.

Arab nations frequently complain that Israel is not held to account for refusing to implement U.N. resolutions calling for Israeli withdrawal from Arab territories captured in the 1967 Middle East war.

In his speech Thursday, President Bush reaffirmed Washington's support for creation of a Palestinian state side by side with Israel and said America will continue to encourage efforts to reach a "just and comprehensive settlement" to that conflict.

Muasher, the foreign minister of Jordan, which has a peace treaty with Israel, called for Israeli withdrawal from occupied Palestinian cities and for the resumption of peace negotiations.

Senior officials from the United States, the United Nations, the European Union and Russia are scheduled to meet Tuesday to discuss the Israel-Palestinian situation.