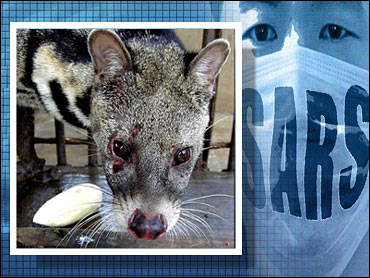 The World Health Organization has traced the SARS virus to the civet cat and two other small mammals in China, and researchers are investigating a possible link between the animals and the SARS outbreak in humans, an official said Friday.

Researchers from the University of Hong Kong examined 25 animals representing eight species in a live animal market in southern China and found the virus in all six masked palm civets they sampled, as well as in a badger and a raccoon dog.

Klaus Stohr, chief SARS virologist at the WHO, said Friday it was impossible to tell from the study whether any of the animals spread the virus to humans or whether they caught the virus from people.

"All these animals could have been infected by feed which was given to them at the market," Stohr said. "Very often these markets have one major supplier of feed."

He added that a recent study from Guangdong province in southern China — where the SARS outbreak first emerged in November — indicated that more than 30 percent of the early SARS cases there were food handlers.

"This is corroborative evidence that there make be a link between the wildlife and the emergence of SARS."

The Hong Kong researchers said people could have been infected while raising, slaughtering or cooking the animals and that eating fully cooked meat was probably safe.

Civet cats are nocturnal animals related to the mongoose, with long tails and catlike bodies. They resemble small raccoons or weasels.

The researchers said it was possible that SARS was transmitted to the animals through human feces used in fertilizer, and that the virus did not originate with them. They recommended that such game animals be raised, slaughtered and sold under careful monitoring.

Meanwhile, the WHO lifted its SARS-related travel advisories Friday for Hong Kong and Guangdong province, declaring the virus there under control.

There also have been no recent reports of cases being exported to other countries from Hong Kong or Guangdong province. All new cases in the past 20 days have occurred in people who were "already identified as contacts of a person with SARS and under active surveillance by the local health authorities," WHO added.

SARS has infected more than 8,000 people worldwide and killed at least 689, the vast majority in China and Hong Kong.

"The outbreak in many areas of China is ongoing, and will require continuing intensive efforts as well as a rapid injection of new resources to fully contain SARS," WHO said.

Also, an American physician with the Centers for Disease Control and Prevention who was helping Taiwan battle SARS left the island Friday on a charter flight after developing a fever and other symptoms possibly caused by the virus.

Chesley L. Richards Jr. was headed for Atlanta, where the CDC is headquartered. He had been in Taiwan since May 15, visiting the emergency rooms and intensive-care units at two Taipei hospitals where SARS outbreaks were reported.

WHO says it is seeking $200 million to launch a fund to help Asian nations combat SARS through medical surveillance and analysis.

It also said the SARS has infected chains of up to 15 people and appears to be just as hardy in its last victim as in its first. Some other viruses mutate over time, and their ability to transmit weakens.

Taiwan reported 55 new SARS cases Friday but no new deaths. The island's total number of infections is 538 and the death toll is 60

the third-highest toll after mainland China and Hong Kong.

In Canada, health officials say they fear that four people in a Toronto hospital may be ill with SARS. All four are in a respiratory isolation ward, two in critical condition. If confirmed, they would be the city's first new SARS cases since April 19.