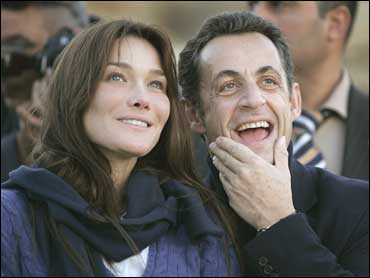 It was a big day for the first lady of France, Carla Bruni-Sarkozy.

The model-turned-singer - who married President Nicolas Sarkozy in February - has become a popular first lady.

She's been an image-booster for troubled Sarkozy, so the album's success (or failure) could be important to the president, pundits say.

On Friday night, reports CBS News correspondent Mark Phillips, it was Carla, not Nicholas, who was the star of the French evening news. He was only trying to promote peace in the Middle East. She was promoting herself.

Bruni said Friday that Sarkozy encouraged her to make the album. She insisted she wasn't thinking politically when she wrote and recorded it.

"It's just a few songs," she said in an interview on TF1 television.

She radiated affection for her husband, calling him a "great statesman" who keeps his promises, both private and public.

"I have willingly submitted to love," she said. "I want to make him happy, to calm him."

The Italian-born Bruni composed and wrote the lyrics for most of the songs on her new album, "Comme si de rien n'etait" ("As If Nothing Had Happened"), and sings them with her trademark softly sexy voice, accompanied by guitar and other instruments, be they violin or harmonica. She uses her maiden name on the album.

As Phillips put it, "Most of the songs were written before her whirlwind romance and marriage, but a few are about it. Showbiz and politics meet - again."

Bruni, 40, married Sarkozy in February, just months after his messy, high-decible divorce from Cecilia Sarkozy. The new pair was initially criticized as too un-presidential. But Bruni, with her high-society upbringing and easy elegance, quickly won hearts.

Her curtsy before Queen Elizabeth II when her husband made his first state visit to Britain in March was the clincher.

What's been called "Carla mania" then took over, with the first lady upstaging her husband on official visits.

Bruni said the album royalties will go to charity.

Sales were thin Friday morning at Virgin Megastore on the Champs-Elysees, not far from the presidential palace, but one customer said he bought the album for the artistry - not the singer's high rank.

"I think it is the artist who is more interesting," said Eric Gardner de Beville. "The fact that she is the first lady adds to her success, of course, but that's not the motivating factor."

The store's music director, Bertrand Dentz, was somewhat critical of Bruni's oeuvre. He said that, for him, only six of the 14 songs really work.

"I think that the rest of the album is a bit boring and not much is happening," Dentz told Associated Press Television News.

A handful of people questioned on the street said that, whatever the reception, Bruni is right to continue with her singing career.

"I think her image stays that of the model and singer before that of being the first lady," said Marion Feurdrinier, 21, a marketing student from Rouen.

Bruni won't be touring to promote her album. She has said that concerts involve too much security, because of her status. However, she's vowed to remain a thoroughly modern woman who makes her own decisions and maintains her career, despite her husband's job.

She said in Friday's television interview that she wants to do humanitarian work.

The album goes on sale in the United States in August.