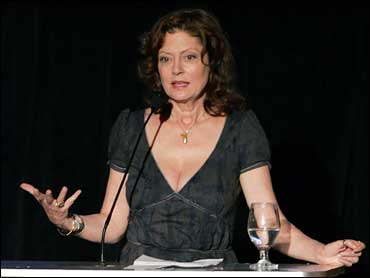 Actress and political activist Susan Sarandon says she received death threats and attacks from parts of the American public after she spoke out against the Iraq war.

Sarandon talked about the ways in which she and her family had been targeted in an interview on the British television network ITV.

"I don't think that I ever thought someone would ever really kill me," she said. "Although there were some people who said `I'd like someone to knock her off' on the radio and stuff like that."

Sarandon, who led tens of thousands in Saturday's New York protest, said she had been labeled a "Bin Laden lover" for asking questions about the US invasion of Iraq.

Sarandon said she believed there should have been more debate before the war was launched, but people who asked questions about the Government's policy were labeled as un-American, and had smear campaigns and death threats directed at them.

"They would put my name – and then 'Bin Laden lover' – you know, all of these things," she told Jonathan Dimbleby in the interview shown on Sunday.

"The papers attacked my kids," Sarandon said, "and, you know it was the talking point – it was completely uniform on every hate radio program."

But, she said the media attacks are all incorrect. Sarandon believes she is actually more in touch with the "middle America" than her critics.

"If you ask somebody and you explain to them the future of their children, the future of their world, that's not supposed to be a radical idea at all," she said. "And, you know, who are those 32 percent that still approve of bush? That would be your right wing. The rest of the country is saying he's not doing a good job."

The actress also said there was a backlash in Hollywood for her public stance against the war. She said "certain people in the business" called for boycotts against her.

"I don't think that I thought that I'd really never work again, but when there is nobody else, when you look out on the field and everybody is quiet and they're all looking away and nobody's saying anything, it's a really scary place to be," she said.

Sarandon condemned Democrats for failing to stand up to the Bush administration's Iraq policy – even though she hopes a Democrat will win the White House in 2008.

Asked if she would support Clinton for the presidency because she was a Democrat, Sarandon said the former First Lady lacked principles.

"I think she's a politician like everyone else," she said. "So I'm not particularly supportive of her, I'd like to find somebody that really has a moral bottom line – be they be a man or a woman."