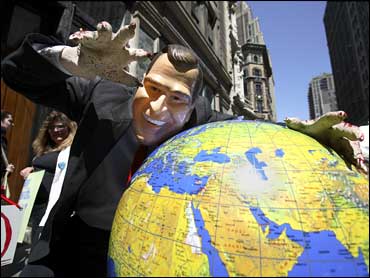 A day after the U.S. military announced that April was the deadliest month for American forces in Iraq this year, hundreds of thousands of anti-war protesters converged on Manhattan Saturday to call for an immediate withdrawal of troops from that country.

On the same day, President Bush told the nation there will be "more days of sacrifice and struggle" in Iraq.

Organizers claimed 300,000 people turned out for the protest, but the New York Police Department told CBSNews.com the actual number was much lower. The police would not release an estimate for the crowd.

One of the many signs in the crowd read "End this war, bring the troops home." Another read "Veterans for Peace."

One woman who marched says she "had a lot of anger" and has to do something. Marjori Ramos of Staten Island said, "We've been lied to."

The demonstrators stretched for about ten city blocks. There were no arrests reported.

Rev. Jesse Jackson, actress Susan Sarandon, and Cindy Sheehan, whose 24-year-old son died in Iraq, were among the marchers.

One group marched under the banner "Veterans for Peace," while other marchers came from as far off as Maryland and Vermont.

"We are here today because the war is illegal, immoral and unethical," said the Rev. Al Sharpton. "We must bring the troops home."

"The Bush Administration hopes to diffuse pressure at home and in Iraq to end its occupation by bringing a portion of the troops home (maybe)," organizer Leslie Cagan said in a statement before the rally. "But withdrawing some troops is completely unacceptable."

Cagan also said marchers are opposed to any military action against Iran.

The New York Police Department closed streets in lower Manhattan in anticipation of the demonstration.

The U.S. military said Friday that at least 67 U.S. troops have died in Iraq in April, and that number climbed to 70 by Saturday.

Although that figure is well below some of the bloodiest months of the Iraq conflict, it marks a sharp increase over March, when 31 American service members were killed. January's death toll stood at 62 and February's at 55. In December 2005, 68 Americans died.

President Bush warned in his weekly radio address Saturday of tough fighting to come and "more days of sacrifice and struggle" in Iraq.

"The enemy is resorting to desperate acts of violence because they know the establishment of democracy in Iraq will be a double defeat for them," Mr. Bush said.

"There will be more tough fighting ahead in Iraq and more days of sacrifice and struggle," he cautioned. "Yet, the enemies of freedom have suffered a real blow in recent days, and we have taken great strides on the march to victory."

At least 2,397 members of the U.S. military have died since the Iraq war began in March 2003, according to the AP count.

Sectarian violence has forced about 100,000 families across Iraq to flee their homes, a top Iraqi official said, as 14 more Iraqis were killed Saturday, including six who were tortured in captivity.

Adil Abdul-Mahdi, one of the country's two vice presidents, told reporters in the southern city of Najaf that 90 percent of the displaced were Shiites like himself and the rest were Sunnis, the minority that held sway under former Iraqi leader Saddam Hussein.

Other estimates of the number of displaced families have been lower.

Dr. Salah Abdul-Razzaq, spokesman of the Shiite Endowment, a government body that runs Shiite religious institutions, put the number of displaced families at 13,750 nationwide, or about 90,000 people.

That includes 25,000 Iraqis who have fled their homes since an attack on a Shiite mosque in Samarra on Feb. 22 triggered a wave of sectarian attacks on Sunni mosques and clerics.

Earlier this week, U.S. spokesman Maj. Gen. Rick Lynch told reporters that U.S. forces had found no "widespread movement" of Shiites and Sunnis away from religiously mixed areas, despite reports to the contrary by Iraqi officials.

In the Sunni-dominated town of Jurf al-Sakhar, 43 miles south of Baghdad and near the mostly Shiite city of Musayyib, gunmen kidnapped a Sunni policeman and his brother from their home early Saturday and shot them to death outside, said police Capt. Muthana Khalid.

Six Iraqis were killed in other violence.

In a village about 90 miles north of Baghdad, gunmen attacked a minibus carrying female students from Diyala University, killing one woman and her father, who was driving the vehicle, police said in a statement.

In western Iraq, one Iraqi civilian was killed and two children were wounded when a mortar round landed on a home in Tal Afar, 93 miles east of Iraq's border with Syria, said police Brig. Ibrahim al-Jibouri said.

In southern Iraq, Iranian forces detained four engineers from Iraq's ministry of water who were riding a boat on Shatt al-Arab, or the Arvand River, which runs along the Iran-Iraq border and into the Persian Gulf, said Iraqi police Capt. Mushtaq Kadhim said.

Iran and Iraq, which share a 900-mile border, have long argued about their line of control on the waterway.