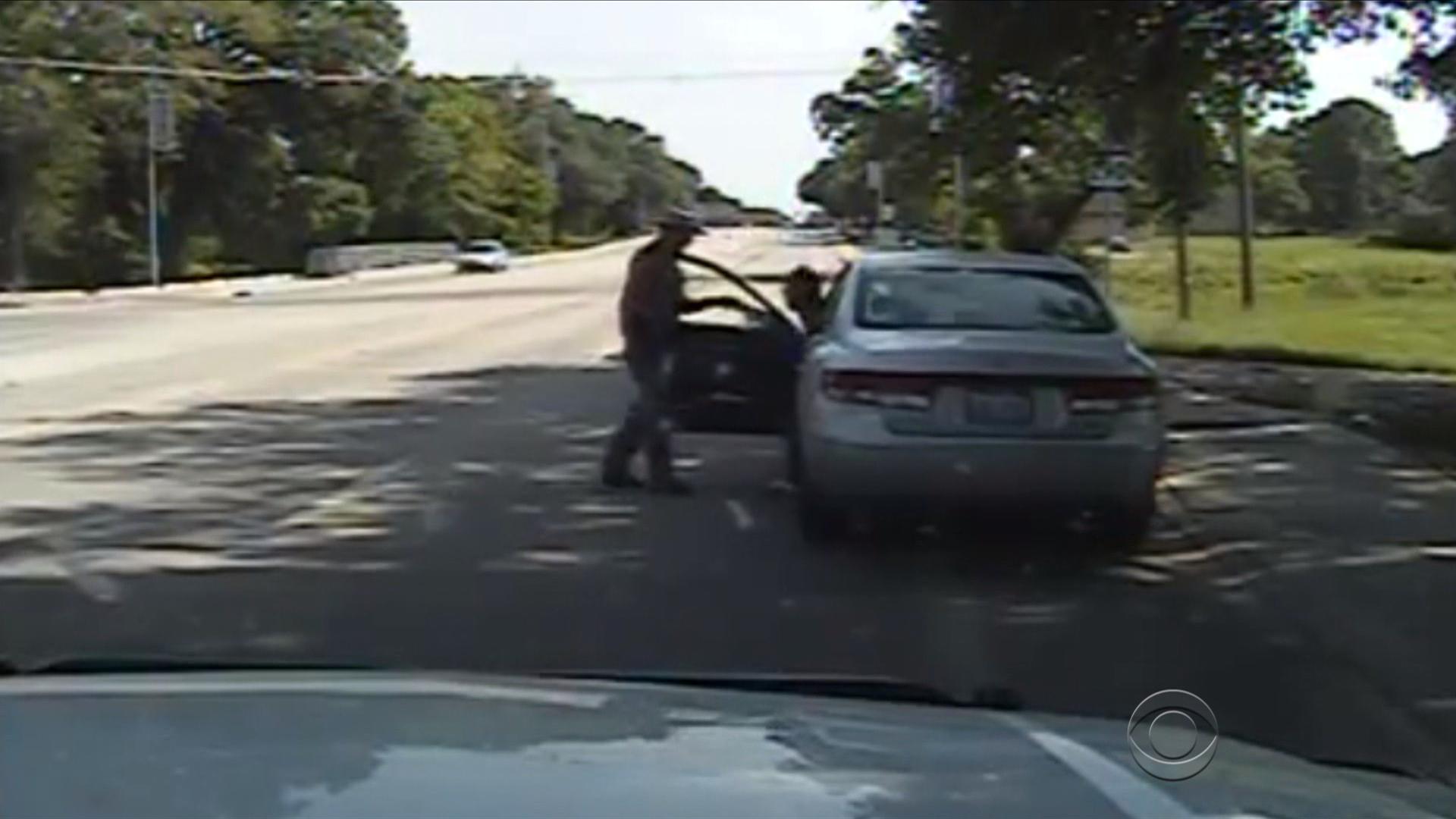 HEMPSTEAD, Texas - The family of Sandra Bland, an Illinois woman who died in jail three days after being pulled over for a routine traffic stop in Texas, lashed out at local police in a press conference Wednesday.

Officials say Bland hanged herself with a plastic garbage bag in her jail cell, a contention her family and supporters dispute.

A dashcam video of the incident has taken center stage in the controversy surrounding Bland's death.

The video posted by the Texas Department of Public Safety Tuesday shows Trooper Brian Encinia stopping Bland for failure to signal a lane change. The conversation turns hostile when Encinia asks Bland to put out her cigarette and she asks why she can't smoke in her own car. Encinia then orders Bland to get out of the vehicle. When she refuses, he pulls what appears to be a weapon and says, "I will light you up."

Out of the camera's view, Bland continues protesting her arrest, repeatedly using expletives. At one point, she screams that he's about to break her wrists and complains that he knocked her head into the ground.

In an affidavit released Tuesday, Encinia said he used force "to subdue Bland to the ground," and she continued to fight back. He also said Bland swung her elbows at him and kicked him in his right shin. Encinia has been placed on administrative leave.

The video has drawn criticism for gaps and overlaps, but the Texas Department of Public Safety insisted Wednesday that it had not been doctored. DPS spokesman Tom Vinger told The Associated Press that glitches in the recording occurred when it was uploaded for public viewing.

On Monday, authorities also released a three-hour video taken from outside Bland's jail cell. That video, according to sheriff's department officials, shows no activity in the hallway leading to Bland's cell for about 90 minutes until an officer goes to check on her, looks through a window, makes a "frantic call to the (jail) controller," and runs back to the jail main area to summon help, Capt. Brian Cantrell, head of the sheriff's department criminal investigation division, said.

Bland's family requested an independent autopsy, which was completed Sunday, their lawyer told a radio station Monday. The results of that autopsy have not yet been released.

Regardless of the dashcam video's veracity, an attorney for the family, Cannon Lambert, said Wednesday that it made one thing clear: "You see right out of the gate, this could have easily been avoided. This happened because an officer was overzealous."

Bland's sister, Sharon Cooper, also zeroed in on the actions of "an officer who felt like maybe his ego was bruised" in the video, saying he was out of control.

"I simply feel like the officer was picking on her," Cooper said.

Bland's family also took issue with reports that she was perhaps depressed before the arrest. The local sheriff on Wednesday said Bland told her jailer she tried to kill herself before.

Bland provided the information while being asked a series of questions posed to each person booked into the jail in Hempstead, about 60 miles northwest of Houston, the sheriff said. He did not provide details about the conversation.

A copy of the document obtained by CBS News, which was filled out by hand by someone else on Bland's behalf, includes the question: "Have you ever attempted suicide?"

On a subsequent page of the document, which appears to be a typed summary of Bland's responses, the response to "Attempted suicide?" is "no." The reason for the discrepancy is unclear.

However, the family pointed to multiple job offers she'd just received and no history with mental health medications of any kind.

However, Bland posted a video to her Facebook page in March, saying she was suffering from "a little bit of depression" and post-traumatic stress disorder. At least one friend said she was just venting after a bad day.

Bland, who was from the Chicago suburb of Naperville, was in Texas to interview for a job at Prairie View A&M University, the historically black college from which she graduated in 2009. She got the job and would have started next month.

At a memorial for Bland Tuesday night, her mother says she believes her daughter was murdered.

"There is not anywhere that I can see that my baby took her own life," said Geneva Reed-Veal.

In a statement Wednesday, Texas Gov. Greg Abbott said Bland's family "deserves answers" and that the Texas Rangers will coordinate with the FBI in investigating her arrest and death.