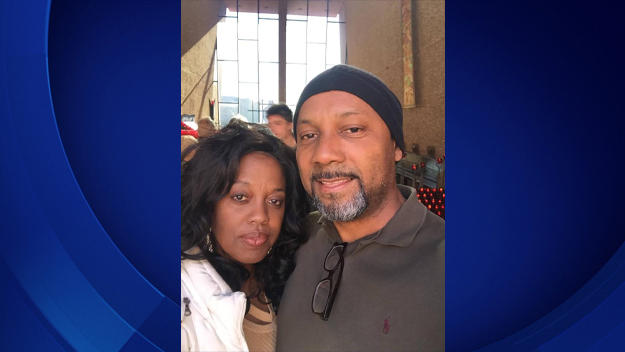 SAN BERNARDINO, Calif. -- Details of a troubled marriage and the suspect’s disturbing past are emerging after a California man walked into his estranged wife’s elementary school classroom and opened fire, killing her and an 8-year-old student and wounding a 9-year-old before fatally shooting himself.

Some six weeks earlier, 53-year-old Cedric Anderson was a newlywed calling his 53-year-old wife Karen Smith an “angel” in one of many social media posts professing his love. Smith was a dedicated teacher who took up the profession about 10 years ago after her four children grew up, her mother said.

San Bernardino police have said nothing of what might have motivated Anderson to open fire in the special-education classroom at North Park Elementary School on Monday.

“No one has come forward to say they saw this coming,” Police Chief Jarrod Burguan said, though Anderson had a history of weapons, domestic violence and possible drug charges that predated the brief marriage.

Anderson, a pastor with military background, and Smith, an educator who was also religious, married in January, the woman’s mother Irma Sykes told the Los Angeles Times. But after the two wed, a different side of Anderson emerged, Sykes told the paper.

Sykes would not elaborate to the Times on what her daughter experienced in the troubled marriage. But she said after about a month, her daughter ended the relationship and was contemplating divorce.

“She thought she had a wonderful husband, but she found out he was not wonderful at all,”  Sykes said. “He had other motives. She left him and that’s where the trouble began.”

In an interview with the New York Daily News, Sykes called Anderson “a wolf in sheep’s clothing” and said her daughter regretted marrying him within a week. Sykes said Anderson accused her daughter of infidelity and threatened to kill her.

“He told her he would throw her out the window,” Skyes told the Daily News. “She was shocked, like ‘What happened?’ He was so kind to her while they were dating. She had no idea.”

Burguan confirmed during a Tuesday press conference that a family member told investigators Anderson made an allegation of infidelity against Smith and that she had mentioned his behavior was odd.

“She was concerned about his behavior and he had made some threats toward her. He did not make a specific threat to shoot her,” Burguan said. “She didn’t necessarily take the threats seriously -- she thought he was reaching out for attention.”

After she ended the relationship and moved out of the home to live with her adult children, Burguan said, “he had been making efforts to have her come back home. She was resistant to that.”

“I don’t know if that just reached a boiling point or what it was,”  Burguan said. “Nor do we know why he chose to do this at the school.”

Burguan said investigators found a handwritten note when they searched the home that referenced the relationship and how Anderson felt disrespected, but said it was not a suicide note.

On social media, Anderson painted a sunnier picture of the marriage. What appears to be Anderson’s Facebook page features many public declarations of love for Smith between statements of religious devotion before his last public post on March 15.

“She knows when to ignore me,” Anderson said with a laugh in a short video posted Feb. 27. “Well, it makes a happy marriage.”

Anderson had posted that he “loved being married to Karen Smith-Anderson!” and shared a photo of the two of them on March 4 during what he described as a date night.

The page also had several photos of his wedding to Smith and their honeymoon among the scenic red rocks of Sedona, Arizona.

In 1993, Anderson faces two misdemeanor counts of battery in Kern County, but he was reportedly exonerated six months after the case was filed and both charges were dropped.

School staffers knew Anderson, who followed the proper protocol and got into the school through the front office by saying he had to drop something off for Smith, school district officials said. No one at school was aware of the problems in the marriage, Burguan said Tuesday, saying Smith “effectively kept her private life private.”

Smith was his target and the two boys were hit as he was firing at her, the police chief said. Anderson emptied and reloaded the gun before turning it on himself.

Nine-year-old Marissa Perez said she got under a table as soon as she saw the gunman enter her classroom Monday.

“She keeps telling me ‘My teacher got shot, my friend got shot,’” her mother, Elizabeth Barajas, said as she clutched her daughter’s blood-stained sweatshirt.

Marissa said the shooter didn’t speak as he began shooting. One of her friends was hit, she added, pointing to her abdomen.

There were 15 students in the special needs classroom ranging from first to fourth grade, along with two adult aides, Burguan said.

Eight-year-old Jonathan Martinez was airlifted to a hospital, where he was declared dead. The 9-year-old boy, whose name was not released, remained hospitalized Monday night.

The 600 other students at the school were bused to safety at California State University’s San Bernardino campus, several miles away, after many walked off campus hand-in-hand, escorted by police.

Panicked parents had to wait hours before being reunited with them at a nearby high school.

Holly Penalber, whose 9-year-old son and 7-year-old daughter attend the school, called it “every parent’s worst nightmare.” She said the long wait was “frustrating but also understandable.”

Once a major rail hub and citrus producer, the city of 216,000 people filed for bankruptcy in 2012 after struggling to pay its employees despite steep cuts to the budget. It was hit hard by the great recession, seeing rises in unemployment and violent crime.

The shooting came 15 months after a terror attack in San Bernardino that killed 14 people and wounded 22 others at a meeting of county employees. Husband-and-wife shooters Syed Rizwan Farook and Tashfeen Malik were later killed in a gunbattle with authorities.

An overflow crowd gathered at sunset at Our Lady of the Assumption Church in San Bernardino to mourn and pray for the victims and survivors of Monday’s shooting. One man wore a shirt that read “stop the violence in SB.”

“Sometimes all we can do is cry. And today is the day for that,” Bishop Gerald R. Barnes told the gathering. “We’ll get up again. We’ll move on. We’ll become stronger. But today is the day to cry.”

School district officials said classes at North Park would be canceled for at least Tuesday and Wednesday. Counselors were made available at a nearby middle school for students, family and staff.