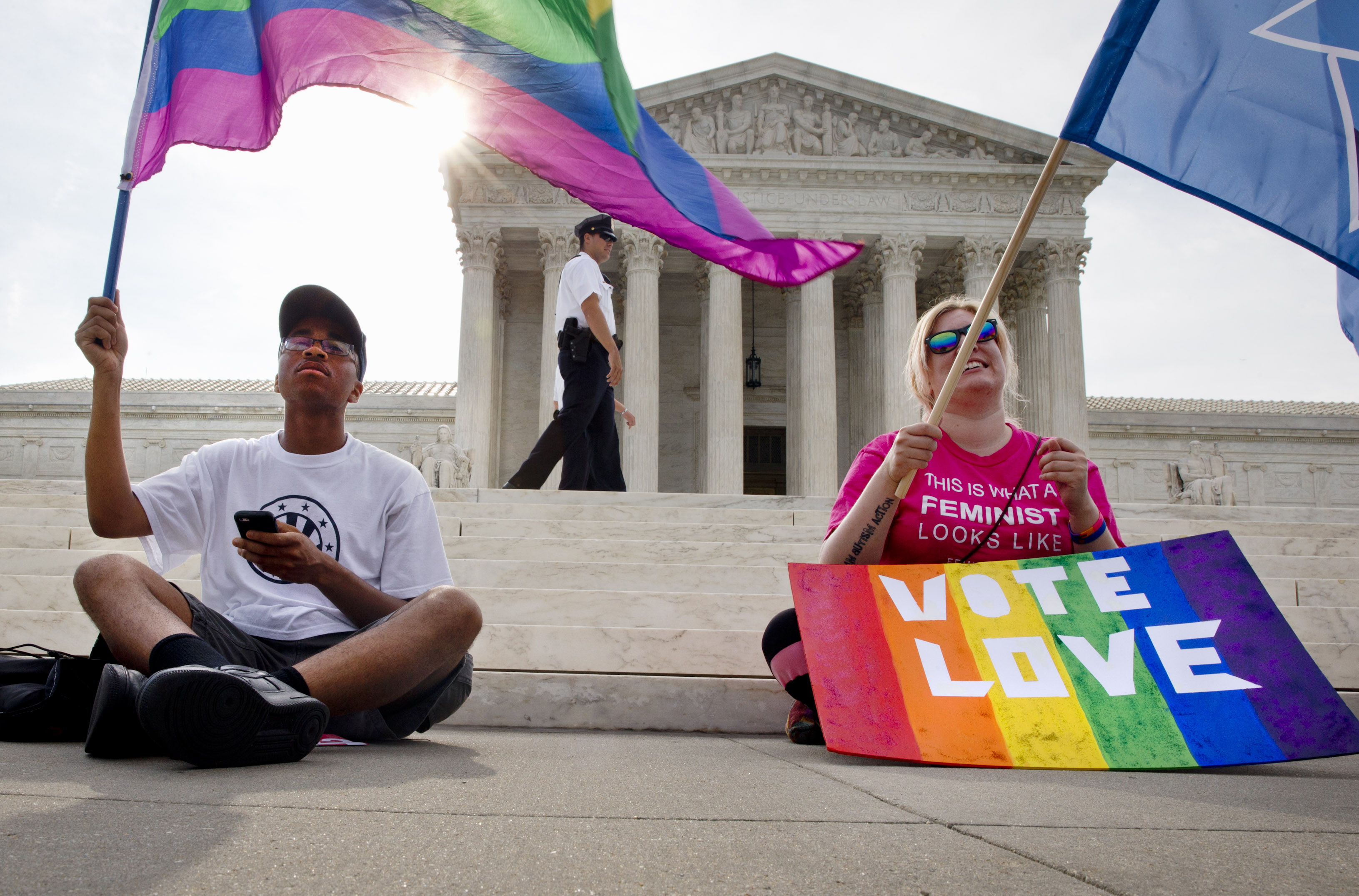 Supporters of same-sex marriage hailed a Supreme Court ruling on Friday that granted gay couples in all 50 states the right to wed, marking it as a victory for equality and human rights.

In a 5-4 decision written by Justice Anthony Kennedy, who sided with the court's four liberal justices, the Court found that the 14th amendment guarantees couples in all 50 states the right to marry, and that states must recognize same-sex unions performed in other states.

President Obama, who declared his own support for same-sex marriage just over three years ago, commended the ruling on Twitter:

One of Mr. Obama's would-be successors, former Secretary of State Hillary Clinton, also weighed in on Twitter, writing, "Proud to celebrate a historic victory for marriage equality--& the courage & determination of LGBT Americans who made it possible."

She also tweeted a bit of pride flair in her campaign's signature font:

One of Clinton's Democratic challengers, former Maryland Gov. Martin O'Malley, commended the ruling in a statement, noting the leading role his state played in the fight for LGBT rights when it passed a same-sex marriage bill in 2012.

"Today, the Supreme Court affirmed that marriage is a human right - not a state right," said O'Malley. "I'm grateful to the people of Maryland for leading the way on this important issue of human dignity and equality under the law. The American Dream is strongest when all are included."

House Minority Leader Nancy Pelosi, D-California, said the court's decision "is about creating a future where loving, committed families are able to live with dignity."

"This is about freedom. This is about love. This is transformative, not only for LGBT families, but for America," she added. "Shamefully, generations of LGBT Americans have been forced to live the indignity of invisibility, having been denied the comfort and legal benefits of marriage. Finally, every loving American - regardless of their race or where they live, regardless of their gender or gender identity - has the right to marry the person they love. This decision is a declaration of our deepest held values and our hope for a better America."

Pelosi also looked forward to the next fight for LGBT equality, saying, "We must continue the fight for the full protections that are long overdue for LGBT Americans, many of whom can still be fired for who they are and who they love."

Clinton struck a similar note in an email to supporters, writing, "The struggle for LGBT rights doesn't end with this triumph. Our work is not finished until every American can not only marry, but live, work, pray, learn, and raise a family free from discrimination and prejudice."

Ohio Sen. Rob Portman, who became the first Republican senator to declare support for same-sex marriage in 2013, expressed his support for the ruling as well.

"The issue of marriage equality is one that divides people of principle, and I understand that," he said. " In 2013, I decided to support marriage equality after I came to understand this issue better in the context of my own family. I can't help but view today's Supreme Court decision through that same lens."

Portman said in 2013 that his evolution on the subject began when his son Will came out as gay in 2011.

"As a father, I welcome today's decision," the senator declared in the wake of Friday's ruling.