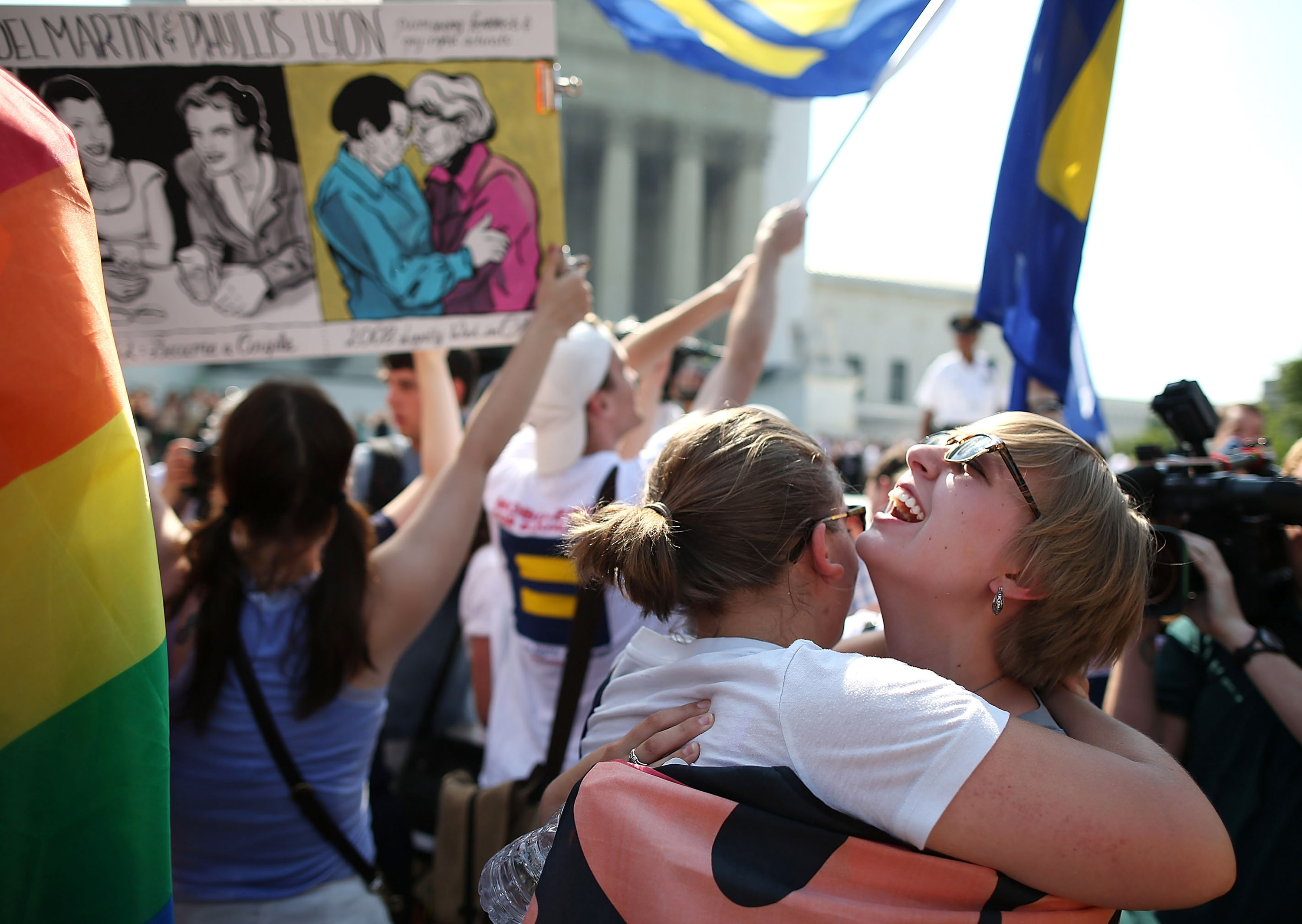 The fight to recognize same-sex marriage in the Unites States isn't over yet, activists on both sides of the issue sounded off over the weekend, pointing largely to a tactful omission in two landmark rulings at the Supreme Court that scored seeming victory for the gay-rights movement.

A 5-4 decision from the justices struck down a provision of the 17-year-old Defense of Marriage Act (DOMA) that denies federal benefits - like Social Security or the ability to file joint tax returns - to legally married same-sex couples. On procedural grounds, the court also dismissed a case considering the constitutionality of California's same-sex marriage ban, called Proposition 8.

Tony Perkins, president of the conservative Family Research Council, Sunday on "Face the Nation" lambasted the judges' "activism," arguing they had "dragged 'We the people' from behind the wheel of this republic, and they've carjacked the nation." Still, he took some solace in the Prop. 8 ruling, which left in place a lower court's decision to strike down the measure but effectively passed up an opportunity to define whether marriage is a constitutionally protected right for all couples, gay or straight.

"Certainly both these cases were disappointing, although I have to say on the California case, the Prop. 8 case... they actually wanted to use that case to impose same-sex marriage on the entire nation, and they failed in that - the court simply punted it back to California," Perkins said. Showcasing that move as something of a silver lining for conservatives, Perkins added it "buys a little time" for his and other organizations that oppose same-sex marriage to attract public support on their side.

"I think Americans will begin to see that with same-sex marriage does not come a hope chest; rather it's a Pandora's box," he said. "It's the reality that people will come face-to-face with over time, because right now same-sex marriage is limited to 12 jurisdictions. And as more people see that their freedoms, the freedoms of parents to determine what their children are taught, to be able to live your life according to your faith, all of that's at risk here. I think people will say, 'Wait a minute... I gave a nod of affirmation, but not to that.' And so I do think there's going to be time to rethink this."

John Eastman, an attorney for the National Organization for Marriage, also pointed to time as his cause's most probable ally. He argued the effects of the Supreme Court rulings are "not going to happen overnight - it's going to take root over time." And, mentioning as an example North Carolina's Amendment 1 - a ballot initiative that made it unconstitutional for the state to recognize same-sex marriage - Eastman added that legalizing same-sex marriage in all 50 states would be a trying task.

While mostly ignoring the court's punt, same-sex marriage advocates have similarly rallied around the Prop. 8 ruling, calling for it to be a precedent for the rest of the states, rather than as a springboard for political what-ifs. Davis Boies - the attorney who argued the Prop. 8 case Hollingsworth v. Perry before the Supreme Court - also appearing on CNN said there "isn't any state we're giving up on" in the effort to legalize same-sex marriage across the nation.

"I don't want to get in today with what are the states we're going to target first or anything like that, because there isn't any state we're giving up on," Boies said Sunday. Groups like the Human Rights Campaign and the American Foundation for Equal Rights, he said, will zero in on legislative efforts, state ballot initiatives and legal maneuvers.

"Our goal is to have marriage equality that's guaranteed by the U.S. Constitution, enforced in every single state in the union," he said.

House Minority Leader Nancy Pelosi, D-Calif., also nodded to the somewhat awkward discrepancy of a far-reaching ruling that doesn't dictate state-by-state law. Asked whether same-sex marriage could be the law of the land within five years, she said on NBC's "Meet the Press," "Well, I would certainly hope so."

"I've been in this, shall we say, 'crusade,' for a long time," she said. "And to see the pace with which it has accelerated in the past few years is very encouraging. Let's hope it's even sooner than that."

Olson's forecast was proven correct Sunday afternoon, when Supreme Court Justice Anthony Kennedy denied a request from Proposition 8 supporters to stop the issuance of same-sex marriage licenses in California. Olson opined that the United States would "be better off in this country if we stopped doing this sort of thing that is divisive and is hurting people who live next door, who work for us, who are our cousins and brothers and sisters.

"...We should be treating all of our citizens equally, irrespective of their sexual orientation," he continued. "This is something that they did not choose to be."

Praising the Supreme Court's decisions for signaling "equality for so many of our citizens who for so long have been discriminated against," Olson said the Supreme Court's ruling "removed that stigma. ...And you can see joy - tears of joy and happiness in hundreds of thousands of people getting married in California to the person that they love."

A self-described conservative and the solicitor general in the Reagan and Bush administrations, Olson forecasted a shift among both parties in how same-sex marriage is treated.

"Some Republicans have not yet come to understand that this is the right thing for all of our country to do," he said. "But, as I said, the polls have change enormously. ...Republicans are changing, Democrats are changing. I think the day is going to come, maybe within just a few years, when the Republican party - just like the Democratic party - all Americans believe in equal treatment for all of our citizens."

Perkins, meanwhile, argued his fight isn't just about "a marriage altar... it's literally about altering the landscape of America."

"We're going to see a loss of religious freedom, there is no question about it - it's already happening," Perkins said. "We're already seeing bakers and florists and photographers forced to participate in same-sex marriages under the threat of law and, in some cases, even jail. I can't think of anything that's more un-American than that."

Perkins said that in states like Washington and Colorado, which house anti-discrimination statutes, "when a same-sex couple comes and says, 'I want you to take pictures of my wedding,' or, 'I want you to bake a cake,' and they say, 'Well look, my religious convictions will not allow me to participate in that,' they're literally being sued by the government, not the individuals. And they've even been adjudicated in such places as New Mexico."

Ralph Reed, head of the Faith and Freedom Coalition that recently flooded Washington, took particular issue with the characterization of his supporters as being "bigots."

Asked by MSNBC host Rachel Maddow whether he and his fellow opponents of same-sex marriage are trying to discriminate against gays and lesbians, Reed fired back: "By that argument, was Barack Obama intolerant 14 months ago?" Listing public servants who were for DOMA before they were against it - including Vice President Joe Biden and Sen. Patrick Leahy, D-Vt. - Reed challenged, "all voted for this law, and Bill Clinton, who signed it into law, were intolerant and motivated by an animus toward gays?