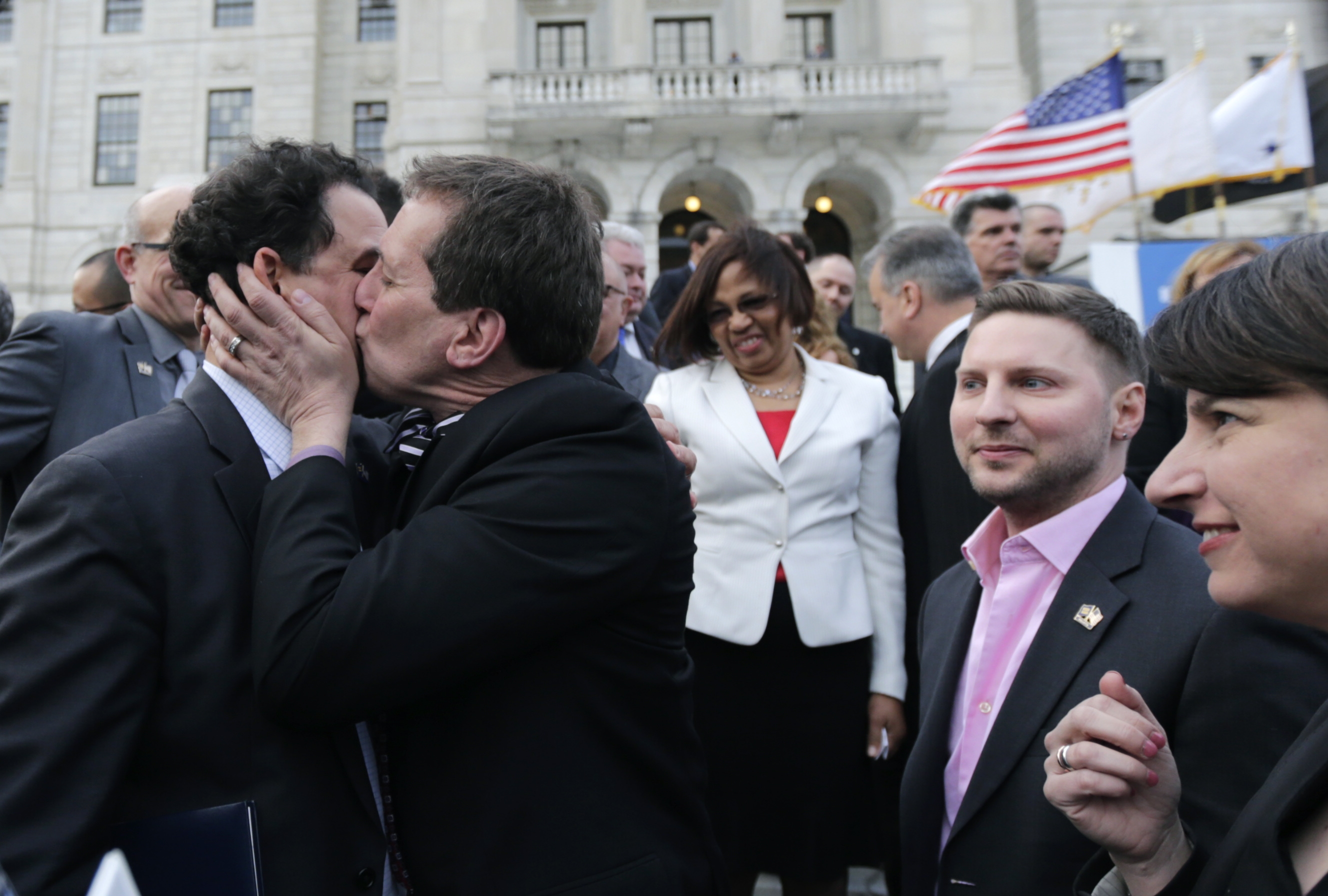 PROVIDENCE, R.I. Rhode Island on Thursday became the nation's 10th state to allow gay and lesbian couples to wed, as a 16-year effort to extend marriage rights in this heavily Roman Catholic state ended with the triumphant cheers of hundreds of gays, lesbians, their families and friends.

Gov. Lincoln Chafee signed the bill into law on the Statehouse steps Thursday evening following a final 56-15 vote in the House. The first weddings will take place Aug. 1, when the law takes effect.

"I've been waiting 32 years for this day, and I never thought it would come in my lifetime," said Raymond Beausejour, a 66-year-old gay North Providence man who has been with his partner for 32 years. "For the first time in my life, I feel welcome in my own state."

After Chafee signed the bill, the hundreds of people who gathered on the Statehouse grounds erupted into cheers as a chorus sang "Chapel of Love."

"Now, at long last, you are free to marry the person that you love," Chafee told the crowd.

The day was bittersweet for Deborah Tevyaw, whose wife, state corrections officer Pat Baker, succumbed to lung cancer two years ago. Months before she died, Baker, relying on an oxygen tank, angrily told lawmakers it was unfair that Tevyaw wasn't considered her wife in Rhode Island despite their marriage in Massachusetts.

"I'm ecstatic, but sad she's not here to see this," Tevyaw said. "I'm sure she's watching, but she's not here next to me. Before she died, she told me, `I started this, and now I'm leaving it in your hands.' We worked hard for this. There were petitions, door knocking, phone calls. I think people decided, `just let people be happy."'

Once consigned to the political fringe, same-sex marriage advocates succeeded this year thanks to a sprawling lobbying effort that included support from organized labor leaders, religious clergy, leaders including Chafee and Providence Mayor Angel Taveras and hundreds of volunteers. Their efforts overcame the opposition of the Catholic church and lawmakers including Senate President Teresa Paiva Weed, who voted no but allowed the issue to come to a vote anyway.

Supporters framed the issue as one of civil rights, arguing in daylong legislative hearings that gay and lesbian couples deserve the same rights and protections given to opposite-sex married couples. The Catholic church was the most significant opponent, with Bishop Thomas Tobin urging lawmakers to defeat what he called an "immoral and unnecessary" change to traditional marriage law.

On Thursday, Tobin repeated his opposition, writing in a letter to the state's Catholics that "homosexual acts are ... always sinful."

"Catholics should examine their consciences very carefully before deciding whether or not to endorse same-sex relationships or attend same-sex ceremonies," Tobin wrote. "... To do so might harm their relationship with god."

The Rhode Island legislation states that religious institutions may set their own rules regarding who is eligible to marry within the faith and specifies that no religious leader is obligated to officiate at any marriage ceremony and no religious group is required to provide facilities or services related to a same-sex marriage.

While ministers already cannot be forced to marry anyone, the exemption helped assuage concerns from some lawmakers that clergy could face lawsuits for abiding by their religious convictions.

Under the new law, civil unions will no longer be available to same-sex couples as of Aug. 1, though the state would continue to recognize existing civil unions. Lawmakers approved civil unions two years ago, though few couples have sought them.

Advocates in Rhode Island say that while they're proud the state is the 10th to legalize same-sex marriage, they expect other states to follow quickly as support for same-sex marriage grows around the country. According to a November Gallup poll, 53 percent of Americans support giving gay and lesbian couples the right to marry, up from 27 percent in 1996.

Rep. Frank Ferri, D-Warwick, who lobbied for same-sex marriage before becoming a lawmaker himself, recalled that years ago he asked a sitting lawmaker if he would consider supporting same-sex marriage. "He said, `I'll pour gasoline on my head and light myself on fire before that bill passes,"' Ferri recalled.

That has changed, said Ferri, who is gay. Ferri said he hopes House Speaker Gordon Fox — who is gay — can marry him and his partner on Aug. 1, the day the new law takes effect, which also happens to be the couple's 32nd anniversary.

"Today a dream has come true," he said. "No more hiding in the shadows. No more being ashamed of who we are."