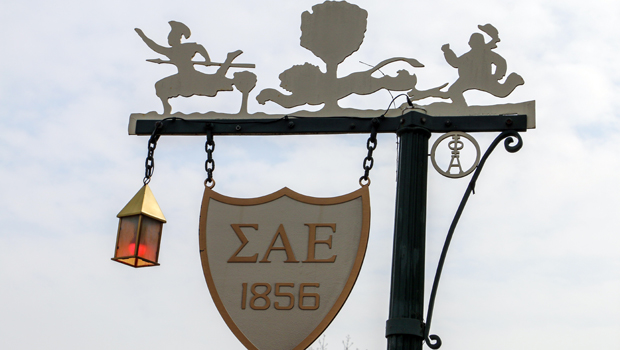 SEATTLE -- The University of Washington is investigating allegations that members of a fraternity made racial slurs and obscene gestures to black students as they marched past the frat house during a protest.

The Seattle Times reports that students allege several white men shouted the comments from the Sigma Alpha Epsilon house as demonstrators passed Feb. 25. The protesters were in a Black Lives Matter march to raise awareness about racism.

The Sigma Alpha Epsilon chapter at the University of Oklahoma was closed this month after video surfaced showing members engaging in a racist chant.

Denzil Suite, vice president for student life, said they were in the process of gathering information about allegations that members of a fraternity made "grossly insensitive comment and rude gestures" toward the Feb. 25 Black Lives Matter march.

"The behavior described is completely inconsistent with the University's values and expectations," Suite said in a statement. "We believe strongly in the value of our diversity and respect for our differences. We are committed to fostering a climate of civility that honors those differences. Any behavior antithetical to this is unacceptable."

The University of Washington fraternity's chapter president, Michael Hickey, says Sigma Alpha Epsilon has investigated and believes the slurs came from nonmembers. He says it's working with others to hold them accountable.

Hickey said in a statement that his members were "concerned and shocked by these allegations, as we pride ourselves in the diversity of our chapter membership and racism is against the moral ethics of our local and national organization."

The Black Student Union has asked the fraternity for an apology and plans to seek sanctions against it from the body that governs the university's fraternities.

During the Feb. 25 march, student Dirir Abdullahi said several Seattle police officers who were escorting marchers intervened to tell young men who were shouting slurs to quiet down.

A Seattle police spokesman said he could find no record documenting the incident.

Maggie Negussie, the president of the Black Student Union, said the fraternity sent a black member of the house to a meeting the BSU held about the incident.

"A lot of people saw that as disrespectful. He's one of the only black males in their house, and he actually didn't even hold a position (of rank) in the fraternity," she said.

On Friday, members of the BSU meet with UW interim President Ana Mari Cauce during a previously planned meeting, said Victor Balta, UW spokesman. He said they discussed a number of topics, including the fraternity, he said.