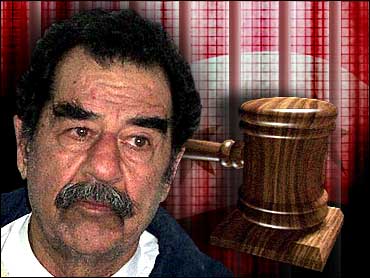 The head of the Iraqi war-crimes tribunal on Tuesday said that Saddam Hussein will be handed over to Iraqis for trial by July 1 — the day after the scheduled handover of limited sovereignty to an interim Iraqi government.

Salem Chalabi told reporters that trials would begin early next year, and that judges would receive "files" on the suspects at the end of this year.

Chalabi is in Kuwait to collect evidence against the suspects.

The clashes took place about sundown Monday on the southern end of Kufa and lasted for about an hour.

Kufa is located close to Najaf, where radical cleric Muqtada al-Sadr took refuge last month after U.S. authorities announced they were seeking him in the assassination last year of a moderate cleric.

In Najaf, about a thousand Iraqis marched through the street, calling for the radical cleric and his followers to leave.

U.S. troops have been involved in sporadic clashes with al-Sadr's gunmen for weeks. But the Americans have avoided an all-out assault on Najaf to avoid inflaming Shiite passions.

When the group passed by al-Sadr's office, his militia took up positions and fired into the air. But there was no clash, and the protest continued without incident.