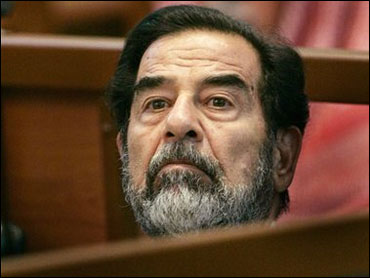 The prosecutor asked for the death penalty against Saddam Hussein and two of his top co-defendants, saying in his closing arguments Monday that the former Iraqi leader and his regime committed crimes against humanity in a "revenge" attack on Shiite civilians in the 1980s.

The arguments brought the 8-month-old trial into its final phase. After Monday's session, the court adjourned until July 10, when the defense will begin making its final summation.

"The delay is to ensure that people can't say that they tried to railroad the defense, that they tried to push them before they were ready, that they didn't give them adequate time to prepare these very technical and difficult legal arguments," Case Western University law professor Michael Scharf, director of its International Law Center, told CBS Radio News.

Saddam, dressed in a black suit, sat silently, sometimes taking notes, as chief prosecutor Jaafar al-Moussawi delivered his arguments, listing the evidence against each of the eight defendants.

Concluding his remarks, al-Moussawi asked for the death penalty against Saddam, his half-brother Barzan Ibrahim — the head of the Mukhabarat intelligence agency at the time — and Taha Yassin Ramadan, a former senior regime member.

"The prosecution asks for the harshest penalty against them, because they spread corruption on earth, they showed no mercy even for the old, for women or for children, and even the trees were not safe from their oppression," he said. "The law calls for the death penalty and this is what we ask be implemented."

Another pending case, the Anfal campaign, where 100,000 to 500,000 people died, could preclude a death sentence, says Scharf.

The defense will likely take several sessions for its closing arguments. Then the five-judge panel is expected to call an adjournment to consider its verdicts against the eight defendants.

It is not known how long it will take for the judges to reach a decision. But the timeframe could mean verdicts as early as August or September.

Al-Moussawi asked for lenient sentences for three of the lower-level defendants — Abdullah Kazim Ruwayyid, his son Mizhar Ruwayyid and Ali Dayih — saying they committed their "acts to carry out orders issued by their superiors." He asked for the release of another defendant, Mohammed Azawi Ali, saying the evidence was not sufficient against him.

He did not specify a sentence for Awad al-Bandar, the former head of Saddam's Revolutionary Court, which sentenced 148 Shiites to death. Al-Moussawi said al-Bandar's actions "supported the crimes" committed by the others and asked that he be sentenced "according to the tribunal's law," which could include the death penalty or imprisonment.

The defendants are accused of charges of crimes against humanity for a crackdown against Shiites in Dujail, launched after a shooting attack on Saddam's motorcade as he visited the town in 1982. They are accused of arresting hundreds of people in the crackdown, including women and children, torturing some to death and killing the 148.

In his arguments, al-Moussawi cast doubt on whether there was a real attempt to kill Saddam. But he said even if there was, the regime's response went far beyond a real investigation into the shooting — which he said consisted only of at most 15 shots that hurt no one.

"The military operation that followed the assassination attempt was a revenge attack in which excessive force was used as a response to this simple incident," he said.

Forty-six people died from torture or the harsh conditions of imprisonment, he said. The Revolutionary Court then sentenced 148 to death after a "show trial in which the defendants did not appear and had no chance for defense," he said. Among the 148 were some of those already killed, and a number of children, al-Moussawi said.

Hundreds of people remained in prison for years "without charge" while the regime retaliated by destroying their homes and levelling their farmlands in Dujail, he said.

The prosecutor showed a videotape of a December session of the trial in which Saddam stood and proclaimed to the court that he alone was responsible for the crackdown in Dujail. In that session, the former Iraqi leader insisted he had done nothing wrong in responding to the shooting attack, saying, "Where is the crime?"

But chief judge Raouf Abdel-Rahman effectively shut down that argument, arresting four defense witnesses and accusing them of perjury.

The prosecution has garnered a strong array of documents detailing the crackdown, including orders signed by Saddam putting the 148 on trial and approving their death sentences. Saddam himself has admitted in court that he ordered the 148 tried before the Revolutionary Court

"Every day, in between all of these outbursts and these rhetorical flourishes by the defendants and their lawyers, we saw the prosecutor meticulously build a pyramid of evidence," said Scharf.

"There are no judges in the world, I think, who could have taken this case and made it an efficient and non-disruptive trial, given the fact that the defendant's main strategy has been to act out, to disrupt, derail and even steal the show," Scharf said.