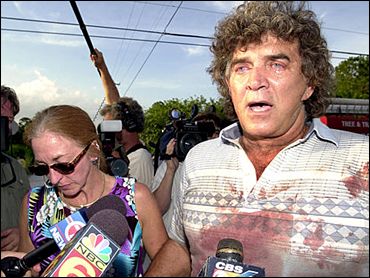 A tiger that escaped from the home of a movie actor who once played Tarzan was shot to death Tuesday after it lunged at a state wildlife officer who was trying to capture it.

Officers approached the tiger intending to shoot it with tranquilizers, but an officer had to use a bullet in self-defense when the 600-pound tiger lunged, said Jorge Pino, a spokesman with the Florida Fish and Wildlife Conservation Commission.

"My beautiful Bobo, that I loved all my life, gone. Gone, because heartless people would not give him a chance, would not give me a chance to walk him home or take him out of the area," said the tiger's owner, Steve Sipek, on CBS News' The Early Show Wednesday morning.

A dozen wildlife trackers and sheriff's deputies had searched more than 24 hours for the animal, which escaped Monday. They had kept watch Tuesday in a five-acre area of dense slash pines and palm trees, hoping to catch the 6-year-old tiger named Bobo.

Sipek developed a soft spot for jungle beasts after playing Tarzan in Spanish language films and working with animals in other B movies back in the 1970s. Sipek has another tiger, a panther, a cougar and lions on his south Florida compound, which is marked by a sign that reads, "Trespassers will be eaten."

The tiger's escape and the shooting were under investigation, officials said.

Sipek says this was a set-up.

"Bobo did not escape. I have 12-foot walls around my property, like China walls. He could not climb 12-foot walls," he told Early Show co-anchor Harry Smith. "There were four gates between my house and the outside world. Somebody opened all of them — somebody who knew how to handle situation and cause problems."

The search for Bobo was the latest case of exotic animals gone wild, reports CBS News Correspondent Jim Acosta, as both New York and New Jersey had incidents of tigers on the loose or tigers found housed illegally in city apartments.

Though, most states allow homeowners to keep lions and tigers on their property, sometimes with few restrictions, reports

"Needless to say, the owner is very distraught. We're distraught," Pino said. "Our concern was to recover this tiger alive and well."

Some nearby residents, who moved to the rural area so they could have room for their own pets, were less sympathetic.

"What I want to know is when he was in captivity, how long did he go without a feeding?" Kim Smith, who has horses and dogs that she normally keeps outside.

"Tigers are predatorial. All of us moved out here because we're city people wanting a taste of the country. But this is a little funky," said Smith, who lives with her husband and their six children.

Wildlife officials had said they did not believe the declawed pet would attack, even though he bit a woman working inside his cage two years ago.

An expert on tiger behavior disagreed that Bobo had posed no danger.

"Tigers are wild animals and they retain hard-wired instincts and to say just because a tiger doesn't have his claws — so what? He still has his teeth and they're powerful," said Ron Tilson, conservation director at the Minnesota Zoo.

"He never should have had these animals in the first place," said Andrea Newell, who grew up two doors away and was visiting family on Tuesday.