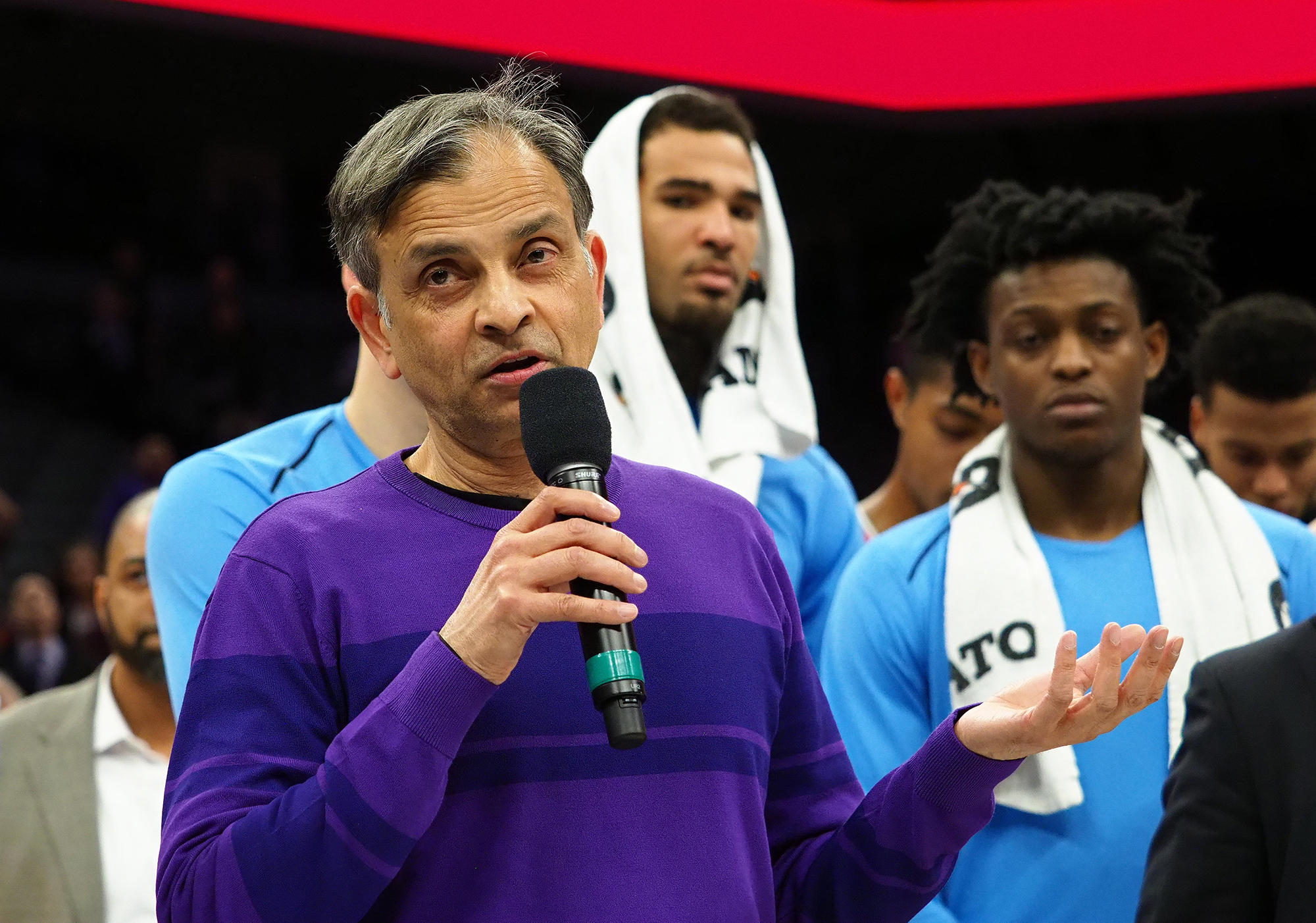 SACRAMENTO, Calif. -- An NBA team owner expressed sympathy for the family of an unarmed black man who died in a police shooting after hundreds of protesters in California's capital city joined hands to block thousands of fans from entering the arena where the Sacramento Kings were playing. The protesters also marched into City Hall and disrupted rush-hour traffic on a freeway.

Protesters shouting "Shut it down" formed a human chain outside Golden 1 Center Thursday evening while dozens of police initially attempted to clear entrances before fans were told to go home. The game between the Kings and Atlanta Hawks started about 20 minutes late and was played before about 2,000 fans in the 17,000-seat arena.

The protesters eventually dispersed and no arrests were made.

After the game, Kings owner Vivek Ranadive addressed the small crowd from center court, surrounded by Sacramento's players and coaches. He offered condolences for the family of Stephon Clark, 22, who was shot Sunday in the backyard of his grandparents' home.

"We are so very sorry for your loss," Ranadive said. "We at the Kings recognize people's abilities to protest peacefully and we respect that. We here at the Kings realize that we have a big platform. It's a privilege but it's also a responsibility. It's a responsibility that we take very seriously and we stand here before you, old, young, black, white, brown, and we are all united in our commitment.

Ranadive emigrated from India at a young age to study at the Massachusetts Institute of Technology and Harvard Business School before founding a successful software company. He bought the Kings in 2013.

In September, he spoke out against President Trump's criticism of professional football players who kneeled during the national anthem to protest racial injustice and police brutality against minorities.

Sacramento's Vince Carter said players from both the Kings and Atlanta Hawks talked to one another about the situation throughout the game. An eight-time All-Star, Carter praised Ranadive's postgame comments.

"What Vivek said speaks volumes," Carter said. "Regardless of your skin color, it's just what's right and what's wrong and how we can support each other, even if it has nothing to do with you. Lend a hand and support. That's the message that needs to shine through all of this."

Clark was suspected of breaking into cars in a South Sacramento neighborhood. Police were called and as a helicopter hovered overhead, Clark ran. Officers on the ground cornered him and, believing he had a gun in his hand, fired 20 rounds.

Afterward, police found no weapon, only a cellphone.

"We are at a place of deep pain" because of recent violence directed at black people in Sacramento and elsewhere, said the Rev. Les Simmons, a community leader who joined the protest. He commended the city's first black police chief, Daniel Hahn, for doing the best he could in the aftermath but criticized officers for their actions.

Clinton Primm said he was friends with Clark, who was nicknamed "Zoe."

Sacramento Mayor Darrell Steinberg said he was horrified by Clark's death but won't second-guess the "split-second decisions" of the officers.

He praised Hahn for quickly releasing videos of the shooting and said the department has improved its policies since the fatal shooting of a mentally ill black man in 2016.

Independent experts said the footage from body cameras and the police helicopter raise more questions than they answer.

The officers appeared to believe they were in danger, they said, and if so the shooting was likely legally justified.

One officer is heard "doing a mental inventory to make sure there's no holes in his body" because the officers appear to think Clark shot at them, said Peter Moskos, a former police officer and assistant professor in the Department of Law and Police Science at John Jay College of Criminal Justice.

Geoffrey Alpert, a professor of criminology at the University of South Carolina and an expert on police use of force, said the officers may have a tough time explaining why they jumped to the conclusion that Clark had a gun.

He also questioned why an arriving backup officer had the two original officers turn off the microphones on their body cameras, eliminating what he called "important evidence."

In an ideal world, the two officers should have immediately provided first aid instead of waiting five minutes for backup, said Eugene O'Donnell, a professor of police studies at John Jay College of Criminal Justice.

"But that could be more the product of hope than reality," he said, with the officers still in shock and worried about their own safety.

The Sacramento Police Department said officers were responding to reports of a man seen breaking into at least three vehicles and later into a neighbor's home. The police said deputies in the helicopter saw Clark break a neighbor's sliding glass door before jumping a fence.

As a result, "their threat radar is really high," said Plumas County sheriff's deputy and special prosecutor Ed Obayashi, who trains officers and testifies in court on police use of force.

"They have to assume that their lives are in danger at that very second," he said.