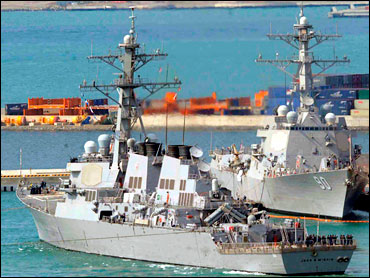 Two U.S. destroyers capable of tracking and intercepting missiles were believed to be bound Monday for a mission to monitor North Korea's upcoming rocket launch.

The USS McCain left the South Korean port of Busan earlier Monday and the USS Chafee was set to depart later in the day, a U.S. military spokesman said. He refused to divulge their destination, but South Korean news reports cited unnamed officials as saying the U.S. ships will monitor North Korea's rocket launch set for April 4-8.

North Korea says it will send a communications satellite into orbit, but regional powers suspect the North is using the launch to test its long-range missile technology. The U.S., South Korea and Japan have warned Pyongyang to drop the plan, saying it would face U.N. sanctions under a Security Council resolution banning the North from any ballistic activity.

The North has told Seoul it will guarantee the worker's safety, the ministry said without providing details. It is not the first time a South Korean has been detained at Kaesong for similar reasons, and all have been released, the government said.

Two American reporters also are being held in North Korea after being detained March 17 near the country's northeastern border with China.

However, it remains unclear whether the rocket is a long-range Taepodong-2 intercontinental ballistic missile or a space launch vehicle designed to carry a satellite, Brown said.

North Korea says it will quit the six-nation nuclear disarmament talks if punished with sanctions. The country's main Rodong Sinmun newspaper reiterated that threat Sunday, saying the talks will "completely collapse" if taken to the Security Council.

Defense Secretary Robert Gates said in an interview broadcast Sunday on Fox television that the U.S. won't try to intercept the North's rocket unless if an "aberrant missile" were headed to Hawaii "or something like that."

"Taking a harder stance: I don't think that would necessarily be helpful in achieving" Seoul's objective of ridding the North of its nuclear program, Lee told the Financial Times newspaper.

The remarks by Lee and Gates reflect attempts to be tough with Pyongyang without provoking the regime, analysts said.

South Korea and the U.S. are taking a measured approach because they want to resume nuclear disarmament negotiations with Pyongyang - and because the U.S. and North Korea likely will hold their first direct talks since President Barack Obama's inauguration, said analyst Kim Yong-hyun of Seoul's Dongguk University.

"This puts everyone in a difficult position. Taking action could provoke the North - that's the dilemma," said Peter M. Beck, an analyst who teaches on Korean affairs in Seoul and Washington.

However, South Korea plans to dispatch an Aegis-equipped destroyer off the east coast to monitor the launch, and Japan has nearly completed deployment of its missile defenses. Tokyo has stationed Patriot missiles around Tokyo, destroyers in the Sea of Japan and more interceptors are on their way to the northern coastline, Japanese defense officials said Monday.

The two U.S. missile destroyers, equipped with combat systems that allow it to track over 100 targets more than 120 miles (190 kilometers) away, have been in South Korean waters joint military drills with South Korea from March 9-20. The military official, who spoke on condition of anonymity because he was not authorized to speak about the deployments with the media, confirmed the warships were to depart Busan on Monday.