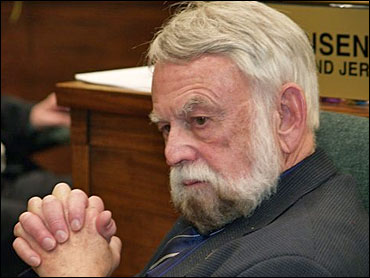 South Dakota moved closer to imposing some of the strictest limits on abortion in the nation, as the state Senate approved legislation that would ban it except when a woman's life is in danger.

The bill, designed to wage a national legal fight about the legality of abortion, passed 23-12 Wednesday. It next returns to the state House, which has passed a different version.

The measure would make South Dakota the first state to ban abortion in nearly all circumstances. Doctors would face up to five years in prison for performing abortions unless a woman needed one to save her life.

"In my opinion, it is the time for the South Dakota Legislature to deal with this issue and protect the lives and rights of unborn children," said Sen. Julie Bartling, a Democrat who is the bill's main sponsor.

The legislation is designed to create a courtroom showdown targeting Roe v. Wade, the landmark 1973 Supreme Court decision legalizing abortion. Opponents say the measure is too extreme and unconstitutional.

"This law almost certainly will never take effect, will never be used to prohibit anyone from having an abortion in South Dakota," says CBSNews.com legal analyst Andrew Cohen. "It will immediately be challenged, in federal court, where the judge will essentially be required to block its enforcement because it is contrary to the law of the land that at least for the time being recognizes abortion rights."

Planned Parenthood, which operates the only clinic that provides abortions in South Dakota, already has said it plans to file a lawsuit against the bill.

The hope of the bill's supporters, reports Jodi Schwan of CBS affiliate KELO-TV, is that the U.S. Supreme Court will be more receptive if the case gets that far.

"They feel with the changing makeup of the Supreme Court that it is perhaps a time to start challenging Roe v. Wade, and they think especially with the addition of Alito and Roberts to the court that those are justices who would vote in their favor," says Schwan.

Supporters of the ban have said an anonymous donor has pledged to provide South Dakota with $1 million to help defend the law in court.

President Bush might have a chance to appoint a third justice in the next few years, and that could mean the nation's highest court would reverse its position on abortion, they said.

"This is a new strategy by opponents of abortion rights," says Cohen. "Instead of nibbling around the edges as then attorney Sam Alito suggested in 1985, they are attempting a direct frontal assault on Roe v. Wade in the hope that by the time these cases make it to the Supreme Court. the Court's makeup will be different, more conservative and more receptive to overruling Roe outright."

"It is a calculated risk to be sure, but I believe it is a fight worth fighting," said Sen. Brock Greenfield, a Republican who also is director of South Dakota Right to Life.

Opponents of the measure say abortion should at least be allowed in cases involving rape, incest and a threat to a woman's health, they said. Senators rejected proposed changes that would have created exceptions in those cases. They also declined to put the proposed ban before voters in the November election.

Sen. Stan Adelstein, a Republican, said he believes it would be "a continued savagery unworthy of South Dakota" to make a woman bear a child if she becomes pregnant as the result of rape.

Schwan says it is hard to tell what Gov. Mike Rounds will do if the bill reaches his desk; he told her he had not yet read it.

"He vetoed a similar bill two years ago, because of some technicalities in it, but those were fixed this time around, I'm told, by supporters of the bill, so that should not be a reason for a veto," reports Schwan.

Rounds, a Republican and a longtime abortion opponent, has said he would "look favorably" on the abortion ban if it would "save life" — and if it addressed his concerns about the 2004 bill.

"Personally, he would probably be inclined to support it, although whether or not he wants to the state to enter into what will be, in all likelihood, a prolonged court battle, it's hard to tell, and I didn't get a feeling from him that he was committed one way or the other when I talked to him about it a week ago," says Schwan.

Other state legislatures are considering similar measures. But South Dakota is the only state so far to pass such an abortion ban, according to the Guttmacher Institute, a reproductive rights organization in New York and Washington, D.C.