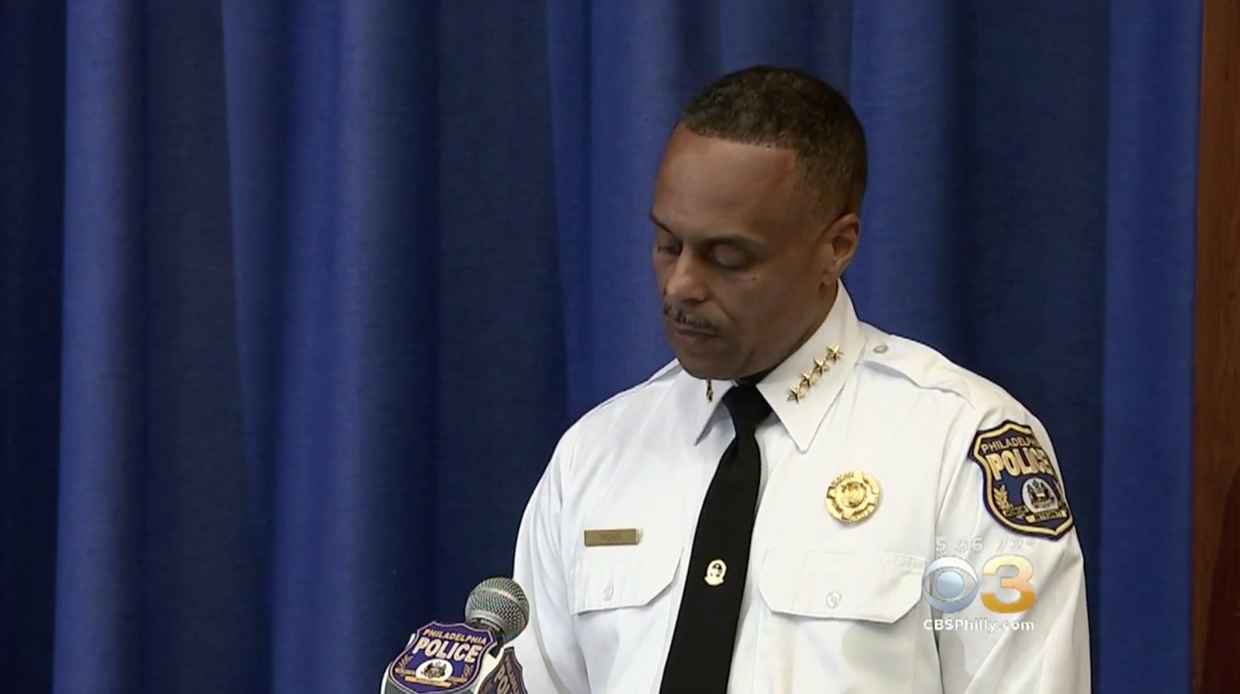 PHILADELPHIA -- A white officer who fatally shot a black man in the back during a traffic stop will be fired, Philadelphia's police commissioner said Thursday.

Commissioner Richard Ross said Officer Ryan Pownall has been suspended and will lose his job next month because the 12-year police veteran used poor judgment when he fired on 30-year-old David Jones on June 8, CBS Philadelphia reports.

"As a leader, it's always difficult to take someone's livelihood," Ross said. "In this case, there were serious policy violations committed on video. I saw it, the shooting investigators saw it. That's where it starts and stops."

Surveillance video shows Jones running away as he's shot. He was stopped for riding a dirt bike on city streets and police say he reached for a weapon during a scuffle.

According to CBS Philadelphia, police said a struggle ensued as Pownall felt a gun in Jones' waistband, then Jones reportedly resisted and started running.

Ross said Pownall's first attempt to shoot at Jones was justified under department policy, because it happened right after the struggle with a weapon.

Pownall's gun jammed, and as he fixed it, Jones dropped his gun and fled. He was at least 10 feet away and had his back turned to Pownall when he was shot, Ross said.

"Because Jones never looked back at Pownall and had nothing in his hands, he posed no imminent threat to Pownall," Ross said, though acknowledging the officer believed Jones was still armed. "Jones also used poor judgment as well when he carried a gun illegally, rode a motorcycle that is illegal to operate on a city street and refused to comply with Pownall's orders."

The shooting led to protests, including a Black Lives Matter protest outside Pownall's home, and activists calling for Pownall's firing and arrest.

"What is our city coming to? We're allowing officers that are supposed to protect us, hurt us," said Doretha Crosby, the victim's mother. "[It's been] a living nightmare. I wake up every morning missing my child. I can't get him back. He was a good young man. All he tried to do was get his life right. He worked, just bought a house, just got married."

"We want the officer charged with murder and we want him convicted and thrown in jail. What you're seeing is a cold-blooded murder and a man who should never have been on the force ever and someone who should've been fired the first time he shot a black man in the back," added Asa Khalif of Black Lives Matter.

The city's police union president John McNesby came under fire for labeling the protesters outside the officer's home a "pack of rabid animals" in remarks last week at a rally in support of police officers.

"Referring to black people as animals has a long, painful history in this country. Fighting divisive words with divisive words gets us nowhere," he told Philadelphia Magazine.

McNesby responded that he never referred to black people in his remarks, and had no idea if protesters were black, white or Asian.

Ross said some of the protests outside the officer's home were "out of bounds."

This was not the first time Pownall has shot a civilian. In 2010, he shot a man who was also running away at the time, according to the police department. The Philadelphia Inquirer reports Pownall and other officers fired at Carnell Williams-Carney, who ran from police after being stopped with an illegal gun. Williams-Carney was struck in the back by a bullet that Pownall later said he fired.

Williams-Carney was paralyzed from his injuries. Pownall and the other officers remained on the job. In a federal civil suit filed by Williams-Carney, a jury ruled in 2013 that the officers were justified in opening fire.