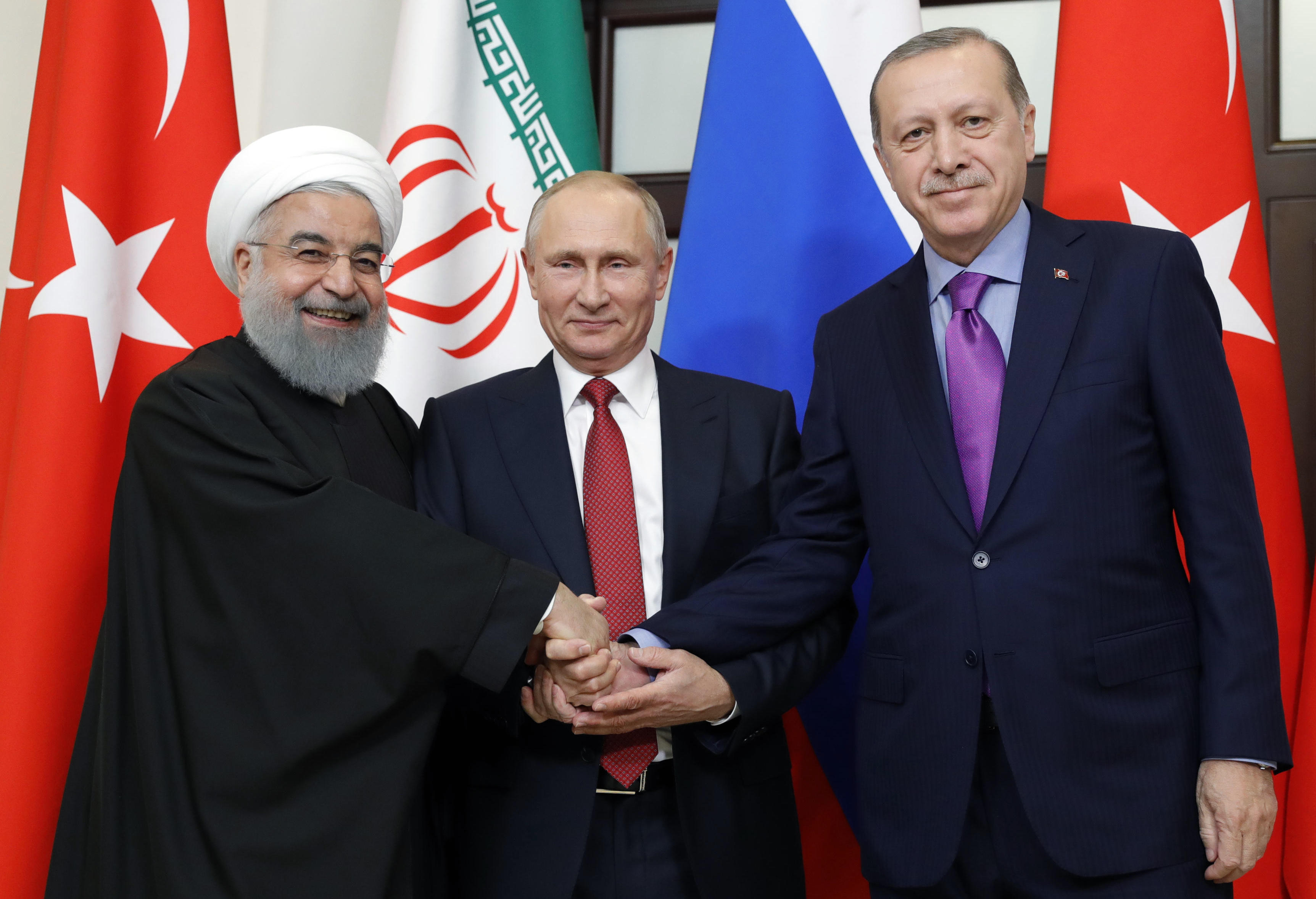 MOSCOW -- When Russia launched a military campaign in Syria two years ago, President Vladimir Putin sought to save his ally from imminent collapse and break Russia's international isolation over a crisis in Ukraine.

He achieved that and more, emerging as a key stakeholder in the Middle East who has brokered deals with many of its key players - from Iran to Saudi Arabia to Turkey and Israel. It's a regional footprint that comes with a degree of clout that even the Soviet Union, which depended on a handful of Arab allies, couldn't dream of during the Cold War era.

And it was accomplished with limited resources and a lot of audacity.

"Vladimir Putin is determined to restore a greater role for Russia as a global power ... and the Middle East is really the main area where Russia has that potential, in part because the Soviet Union played that role in the Soviet period," said William Courtney, an adjunct senior fellow at RAND Corporation.

With just a few dozen jets and several thousand troops, Russia waded into Syria's war and stubbornly pressed its campaign despite international scorn and an outcry over resulting civilian casualties.

Russia's bold intervention in Syria came as the United States under President Barack Obama steered clear of military engagement and found itself in a series of acrimonious disputes with key allies, including Israel and Saudi Arabia. Under the vastly inconsistent policies of Donald Trump, and in an era of an inward looking, America-first U.S. policy, Russia's maneuvers became all the more poignant on the global stage.

Putin's success in the region was on full display Monday, with the confident and upbeat leader moving between Syria, Egypt and Turkey in a whirlwind tour a week after announcing he will seek re-election for another six-year term in March.

Speaking to Russian troops on the tarmac at Hemeimeem air base in Syria, Putin declared victory over the Islamic State group and Syrian rebels and announced he had ordered a scaling down of the Russian contingent in Syria. In Egypt, he signed a deal for the construction of a nuclear reactor on the country's Mediterranean coast and sought to strengthen his relationship with a key regional power that has in the past three years bought billions of dollars in Russian weapons. And in Turkey, a NATO member, the Russian leader appeared to be on the same page with strongman Recep Tayyip Erdogan on key issues.

The Russian president was frequently derided for his penchant for a 19th century-style Realpolitik characterized by cynical political calculus. But Putin's approach paid off in Syria, where he managed to play on the conflicting interests of regional powers and strike deals with various players.

When Putin decided to intervene in Syria, President Bashar Assad was on the verge of collapse, his forces losing on all fronts. Within weeks, the Russian military had airlifted supplies needed to set up a base in Assad's heartland and launched an air campaign at the end of September 2015.

At first, observers were skeptical about Putin's Syria adventure given Russia's economic troubles and the overwhelming negative odds on the chaotic Syrian battlefield, where the Islamic State group, al-Qaida militants and a motley collection of rebels backed by Saudi Arabia, Qatar, Turkey and others were routing Assad's shrinking military.

Many in the West and in Russia predicted Syria would turn into another Afghanistan - a botched Soviet intervention that led to massive losses and ended in a humiliating 1989 withdrawal after nearly a decade of fighting. Putin argued that Russia needed to intervene in Syria to fight a terror threat, but made it clear that he wasn't going to walk into a trap like the Soviet war in Afghanistan.

Another reason for skepticism was the Russian military meltdown that followed the Soviet collapse. The army's vulnerabilities were highlighted by separatist wars in Chechnya and a brief 2008 war with Georgia, where the lack of modern communications and weapons, lack of coordination between various military branches and poor discipline were woefully apparent.

But the Syrian campaign suddenly saw a different Russian military - one armed with sophisticated precision weapons, well-trained, neatly-dressed and proud of its mission.

"Putin managed to explain to the Russian people why Syria was important and not only did he explain it, he also showed them Syria wasn't going to be Afghanistan," Dmitry Trenin, director of the Moscow Carnegie Center, told The Associated Press.

The war saw the combat debut of an array of Russian weapons, including long-range cruise missiles that were fired from surface navy ships, submarines and bombers.

The display of Moscow's revamped arsenals also served another key goal - to show the U.S. and its NATO allies that Russia no longer exclusively relies on nuclear weapons. The new cruise missiles gave Putin a long-sought long-range precision cruise capability that only the U.S. had before.

Early in the campaign, Moscow found itself on the verge of a military conflict with Ankara after a Turkish fighter jet downed a Russian warplane on the Syrian border in November 2015.  But just a few months later, Putin mended ties with Turkey, offering President Recep Tayyip Erdogan strong support after a failed coup attempt. They struck a deal on Syria, setting up de-escalation zones that helped reduce fighting.

Russia also reached out to other key players - from Iran, which staunchly backed Assad, to the Saudis, the Qataris and others who supported the opposition. It also communicated with Israel to make sure the conflict didn't hurt their friendly relationship.

Russian military successes in Syria and its rapprochement with Turkey paved the way for another Putin diplomatic coup - a warming of ties with Saudi Arabia, Moscow's opponent since Cold War times when it armed Afghan fighters battling the Soviet invasion. In a first-ever visit by a Saudi monarch, King Salman visited Russia in October.

While declaring victory in Syria, Putin made it clear Russia is there to stay. He plans to expand the air base and turn a crumbling Soviet-era naval supply facility in Syria's port of Tartus into a full-fledged navy base capable of hosting big ships.

Russia has also drafted a deal with Egypt to allow its warplanes to use bases there - a deployment unseen since the times when Egypt was a key Soviet ally in the Mideast before going to the U.S. side in the mid-1970s.

Courtney, the RAND analyst, said despite Putin's successes in the region, Russia will remain a limited great power that serves mainly as a military supplier because it lacks the resources and capability that the West has for nation building or reconstruction.

"The challenge for Putin is to turn the use of his military force and military weapons supplies in the Middle East to something that is a lasting success, and we don't yet see how Russia is going to get there," he said.