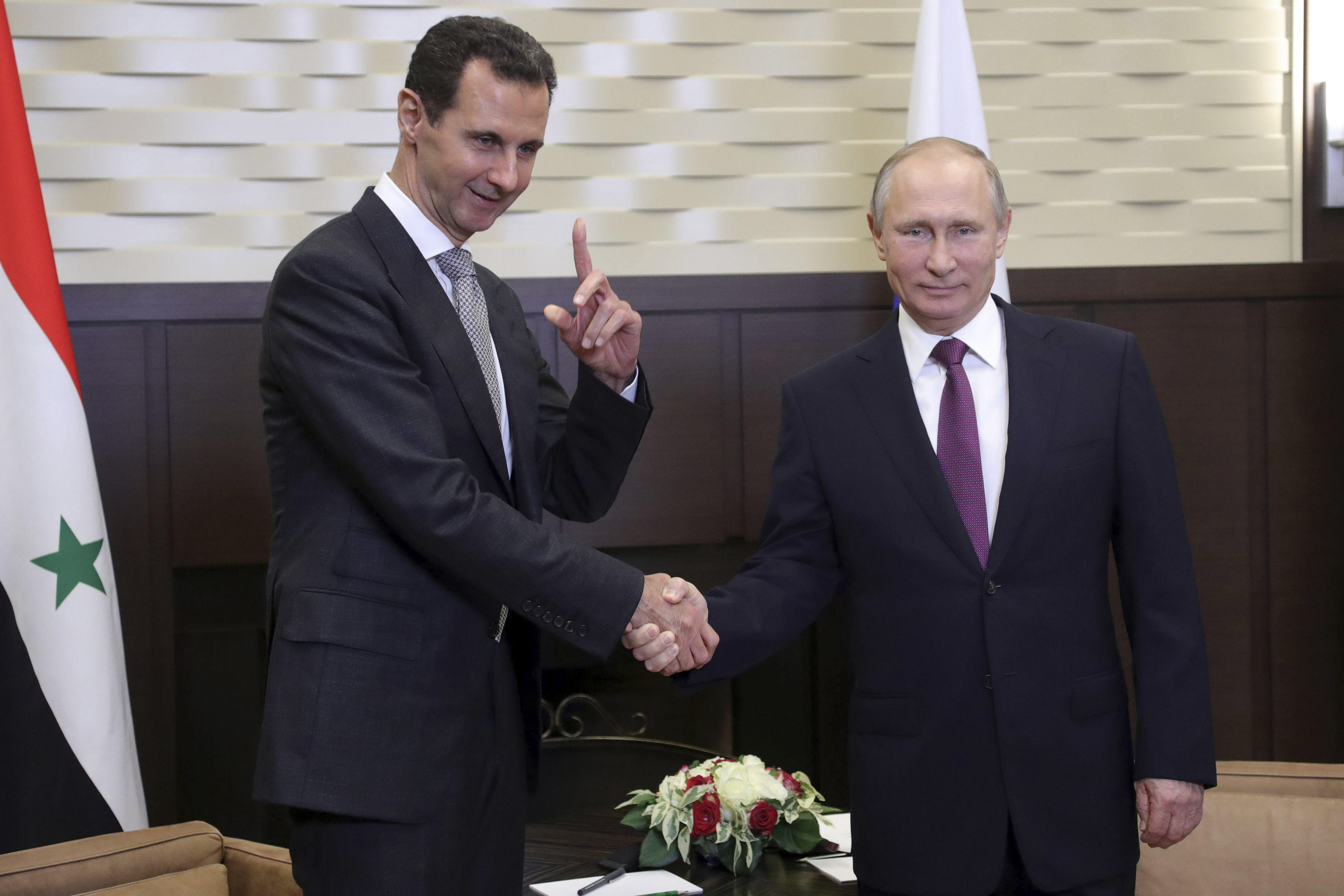 MOSCOW -- Syrian President Bashar Assad was asked to come to Russia to get him to agree to potential peace initiatives drafted by Russia, Iran and Turkey as Russia prepares to scale down its military presence in the country's 6-year war, the Kremlin said on Tuesday.

President Vladimir Putin hosted Assad in the Black Sea resort of Sochi on Monday ahead of a summit between Russia, Turkey and Iran and a new round of Syria peace talks in Geneva. The meeting was unannounced and the Kremlin did not make it public until Tuesday morning.

"I passed to (Putin) and all Russian people our greetings and gratitude for all of the efforts that Russia made to save our country," Assad told Russia's top brass.

Assad has only ventured outside his war-ravaged nation twice since the conflict began - both times to Russia. This week's visit to meet Putin is his second since the crisis began in March 2011 leading to a civil war that has killed some 400,000 and resulted in millions of refugees.

The first was in October 2015, shortly after Russia launched its military campaign in Syria to shore up Assad's forces which turned the war in favor of Assad.

The meeting in Sochi, which lasted three hours, came ahead of a summit at the same place between the presidents of Iran, Russia and Turkey. Iran and Russia have been Assad's main backers while Turkey supports the opposition.

Putin had spoken with the leaders of Iran and Turkey to "assure them that Russia will work with Syrian leadership to prepare the groundwork for possible understandings" that could reached on Wednesday to "make sure" that agreements reached will be "viable," Dmitry Peskov, Putin's spokesman, told reporters on Tuesday.

The Kremlin said Putin would phone President Donald Trump and Saudi King Salman to discuss the situation in Syria on Wednesday.

A U.S. official confirmed to CBS News' Margaret Brennan that Mr. Trump and Putin were to speak later Tuesday morning. The official said the leaders would discuss the peace proposal that Secretary of State Rex Tillerson, his Russian counterpart Sergey Lavrov and Presidents Trump and Putin signed off on when they met recently in Vietnam. That agreement was negotiated earlier in November by U.S. diplomats.

On Monday Tillerson and U.S. Ambassador to the United Nations Nikki Haley held a meeting with Mr. Trump on Syria, focused in part on the recent agreement in Vietnam regarding a political transition in Syria. Mr. Trump has been speaking to other world leaders about it this week, including France's Emmanuel Macron.

Asked whether Putin and Assad have talked about the Syrian president's future in post-war Syria, Peskov said "possible options for political settlement have been discussed." Faced with pressure from other nations urging Assad to step down, Moscow has insisted that it is up to the Syrian people to vote Assad in or out.

With the Syrian government controlling most of the country and Islamic State of Iraq and Syria (ISIS) fighters in disarray, Putin told Assad at the Monday meeting that Moscow is about to curtail its military presence there.

"Regarding our joint operation to fight terrorists in Syria, this military operation is indeed coming to an end," he told Assad in televised remarks. "I'm pleased to see your willingness to work with everyone who wants peace and settlement."

The Kremlin has announced scale-downs and a halt in its operation in Syria before but did not follow through. Putin in March 2016 ordered that a withdrawal from Syria, saying "all the tasks have been accomplished." In January, Russia said it is pulling out its aircraft carrier and other warships from the waters off Syria. Russia continued to operate warships off the Syrian shore as late as this fall.

Footage and photographs released by the Kremlin press office showed Putin giving Assad a warm embrace upon his arrival at Putin's residence in Sochi.

Russian television showed footage of Putin and Assad entering a meeting with the top brass of Russia's defense ministry and the General Staff.

"I asked the Syrian president to stop by," Putin told the Russian generals. He then referred to Assad and said: "I would like to introduce you to people who played a key role in saving Syria."

Assad's office quoted him as thanking Russia and its military, which he said "gave martyrs and made efforts in Syria." He added: "I was very happy to know that you are here since you are the officers who directly took part in the battle in Syria."

Assad said the Russian Air Force helped Syrian troops in the fight against insurgents, helping many Syrians to return to their homes. "In the name of the Syrian people, I greet you and thank you all, every Russian officer, fighter and pilot that took part in this war."