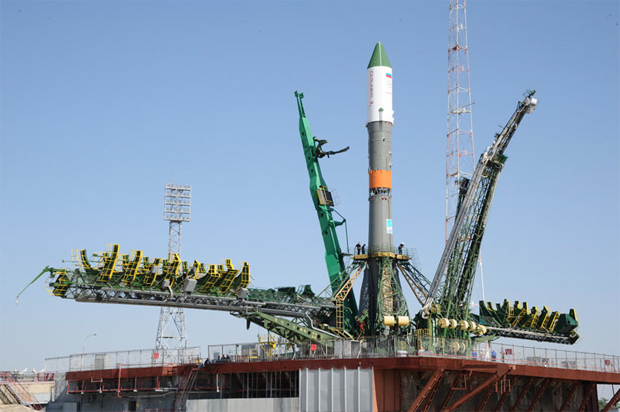 A Russian Soyuz booster and unmanned Progress supply ship loaded with more than three tons of supplies and equipment needed aboard the International Space Station were prepared for an early Friday blastoff, the first Russian resupply run since a Progress failure in April and the dramatic loss of a SpaceX Dragon capsule this past Sunday.

The back-to-back losses of two resupply ships carrying more than five tons of cargo -- and the failure of an Orbital Sciences Antares rocket last October that destroyed a Cygnus cargo ship -- has cut into the space station's reserves, reducing stockpiles from about six months to four or less.

Space station managers say the lab has enough supplies on board to support the station's crew through October. Assuming the next Progress is successful, along with a Japanese HTV cargo ship scheduled for launch in August, the station will be adequately provisioned through the end of the year.

"If we had any further delays in our resupplies, particularly past mid September, October, then we'd have some issues," station astronaut Scott Kelly said Thursday. "But with our current transportation plan, with Progress and HTV in August, assuming those come on time we should be in great shape."

But losing three out of the past seven cargo missions did more than just cut into crew supplies. Critical research gear was lost, along with spare parts and other needed equipment. Kelly said he was particularly mindful of students who lost experiments in the two U.S. resupply failures.

"Third time's the charm, I hope," he said. "We're as confident as we can be in any rocket launch. There's always risk, there's always chances of failure, but you have to look at the positive, and we expect (the Progress is) going to arrive on time. But certainly, we're always prepared for the worst."

Against that backdrop, Russian engineers at the Baikonur Cosmodrome in Kazakhstan readied the Progress M-28M/60P cargo ship and its Soyuz-U booster for launch at 12:55:48 a.m. EDT (GMT-4) Friday to kick off a two-day rendezvous with the International Space Station.

Loaded with 1,940 pounds of propellant, 106 pounds of oxygen, 926 pounds of water and 3,133 pounds of crew supplies and research equipment, the Progress was expected to arrive at the station early Sunday, docking at the Russian Pirs compartment around 3:13 a.m.

The preceding Progress, launched April 28, spun out of control moments after reaching orbit because of an upper stage malfunction. The cargo ship could not be brought under control and burned up in the atmosphere a week and a half later.

In the wake of the failure, the Russians delayed the return to Earth of three station crew members, and the launch of their replacements, while engineers analyzed what went wrong and examined downstream spacecraft and boosters to make sure subsequent launchings would be safe. While details have not been released, the Russians have told their NASA counterparts the issue has been resolved.

SpaceX engineers, meanwhile, have not yet figured out what might have triggered Sunday's spectacular failure of a Falcon 9 rocket two minutes and 39 seconds after liftoff from the Cape Canaveral Air Force Station that sent a Dragon cargo ship plunging into the sea.

SpaceX founder Elon Musk tweeted shortly after launch that telemetry indicated a pressurization anomaly in the second stage liquid oxygen tank, but no other details were provided.

In another tweet early Monday, Musk said the cause of the mishap was "still unknown after several thousand engineering-hours of review. Now parsing data ... to recover final milliseconds." No additional updates have been provided.

Long-range tracking cameras showed what appeared to be a white vapor-like substance, presumably liquid oxygen, suddenly emerging and rapidly engulfing the upper section of the Falcon 9 rocket just before the booster's first stage engines were expected to shut down.

The first stage apparently continued firing as planned but within a few seconds, the rocket was hidden from view in a rapidly expanding vapor cloud with at least one large piece of debris separating and falling away. Finally, the rocket appeared to virtually disintegrate, creating a shower of debris that arced away to the ocean below.

Like all rockets launched from the United States, the Falcon 9 was equipped with a self-destruct system to ensure the booster could be safely destroyed in the event of a failure that might cause the vehicle to veer off course, putting the public at risk.

Despite the apparent upper stage failure, "the vehicle was going right down the (allowed) path" and "did not have to be destructed," Sen. Bill Nelson, a Florida Democrat, told reporters Monday after a briefing from NASA and SpaceX. "The range destruct officer waited quite a while, I was told 70 seconds, because there was no danger, it was all in the normal trajectory that was safe for everyone."

Self-destruct commands eventually were transmitted, but the rocket had pretty much destroyed itself by then.

Lost in the mishap were more than 4,000 pounds of supplies and equipment, including a spacesuit and the first of two docking mechanisms needed by future U.S.-built crew capsules.

Remarkably, Nelson said, SpaceX engineers maintained contact with the Dragon capsule "almost all the way to the ocean." But with an expected ocean impact velocity in the 200 mph range, the capsule and its cargo were not expected to survive in any useable form.

In the wake of President George W. Bush's 2004 decision to retire the space shuttle at the end of the decade, NASA kicked off a program to commercially develop unpiloted cargo ships to make up for the lost lift capability of the winged orbiter.

SpaceX ultimately won a $1.6 billion contract to build and launch at least 12 Falcon 9/Dragon cargo missions to the station to deliver more than 20 tons of supplies and equipment while Orbital Sciences Corp. won a similar $1.9 billion contract for development of the company's Antares rocket and Cygnus cargo ship.

Orbital successfully launched two resupply missions but the third operational Cygnus, which took off on Oct. 28, 2014, was destroyed seconds after liftoff when the Antares first stage exploded in a spectacular fireball.

SpaceX's Dragon and Russia's Progress cargo craft then took turns with four successful resupply missions in a row. But on April 28, a Russian Progress, the 59th launched to the station, spun out of control moments after reaching orbit and plunged back into the atmosphere two weeks later.

The Dragon launched Sunday was SpaceX's seventh operational mission and the first resupply flight since the Progress went awry. And it, too, ended in failure, the third loss of a space station supply ship in seven flights over just eight months

On a more personal level for SpaceX, it was the first failure of a Falcon 9 rocket in 19 flights dating back to the booster's debut in 2010.

"It's taken a bit of the glow off SpaceX," space policy analyst John Logsdon told CBS News. "It's become like other launch companies. They have failures."

Asked if the mishap raised any concerns about the commercially-structured resupply contracts, which leave more oversight in the hands of the contractors, Logsdon was circumspect.

"I would have to be shown that whatever the root cause of Sunday's failure is was somehow linked to less government oversight," he said. "We don't know that. ... It could be just a manufacturing flaw on one fuel tank that didn't get caught. Now, that's oversight. It could be a random event for which nobody could have known in advance."

Either way, Nelson said the latest mishap demonstrates the need for multiple launch providers, and not just for unpiloted cargo ships.

NASA is funding development of new commercially managed crew ferry ships being built by Boeing and SpaceX. Agency managers hope both companies will be ready for initial piloted flights to the space station in the 2017 timeframe, returning manned spaceflight to U.S. soil for the first time since the shuttle's retirement in 2011.

While NASA and Roscosmos, the Russian federal space agency, plan to continue using each other's spacecraft for the duration of the station's lifetime, the Boeing and SpaceX crew ships will end NASA's sole reliance on Russian Soyuz spacecraft at some $80 million per seat.

But Congress has never fully funded the commercial crew program and looming cuts in the fiscal 2016 budget threaten to delay the program by up to two years, Nelson said, all but assuring extended reliance on the Russian Soyuz.

Because of past cuts, NASA argues, the agency needs the full $1.24 billion requested to keep the commercial crew program on track for first flight in 2017.

"I think the biggest threat to us putting Americans on American rockets and getting back into space in 2017 is the fact that a bunch of folks who don't understand what they're doing have cut $325 million from the Senate appropriations bill for commercial crew and over in the House they have cut $225 million," Nelson said.

Supporters of NASA's commercial crew program, he said, "will be making the argument that of all times, now is not the time to cut appropriations for commercial crew because you need to keep a robust competition of at least two commercial providers for getting Americans on American vehicles to and from the International Space Station."