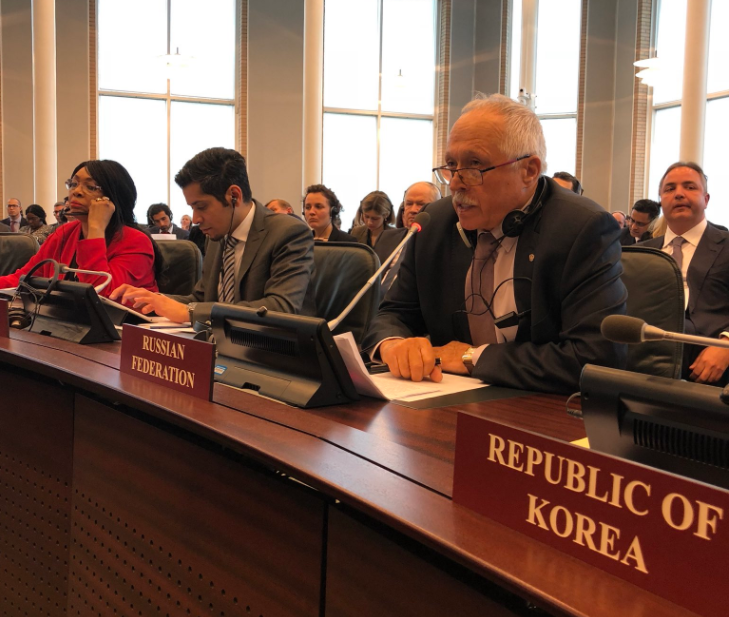 THE HAGUE -- Russia and Britain faced off Wednesday trading accusations at a tense meeting of the world's chemical weapons watchdog, as Moscow accused British and U.S. secret services of being behind the poisoning of a Russian former double agent. London slammed as "perverse" a Russian proposal for a joint probe into the poisoning of ex-spy Sergei Skripal and his daughter Yulia with a nerve agent, dismissing it as a "diversionary tactic."

But Russian officials have hit back, saying accusations that Moscow engineered the attack were a, "grotesque provocation ... crudely concocted by the British and American security services."

Russian Foreign Minister Sergey Lavrov said this week that "there are other explanations besides those put forward by our Western colleagues, who declare that it can only be the Russians who are responsible."

"It could also be advantageous to the British government, who clearly find themselves in a difficult situation having failed to fulfill their promises to voters over Brexit," Lavrov said Tuesday. His deputy, Alexander Grushko, said Skripal's poisoning could be a "provocation arranged by Britain" in order to justify high military spending, because "they need a major enemy."

British authorities say the Skripals were poisoned with the Soviet-concocted nerve agent Novichok in the town of Salisbury on March 4, and said it was "highly likely" Moscow was behind it. Foreign Minister Boris Johnson has said the Russian government bears responsibility for the attack, either for orchestrating it or for failing to control its undeclared chemical weapons stockpiles.

The crisis has sent the long-difficult relations between Russia and the West plummeting to new lows. Both sides have already expelled scores of diplomats. Britain has also suspended high-level diplomatic contacts with Moscow.

At the closed-door meeting of the Organisation for the Prohibition of Chemical Weapons (OPCW) Executive Committee in The Hague, convened at the request of Moscow, Russia insisted it was ready to cooperate.

"We consider this is necessary to ensure that this problem is solved within the (international) legal framework," the Russian embassy to the Netherlands said in a Tweet. It added that it had won backing from 14 other countries on the OPCW's governing Executive Council and its statement was "supported by solid facts by experts in this field."

The British delegation, however, said "Russia's proposal for a joint, UK/Russian investigation into the Salisbury incident is perverse. It is a diversionary tactic."

Moscow was seeking to "evade the questions the Russian authorities must answer," it added in a tweet.

The delegation later tweeted that the analysis of the Salisbury samples was "being carried out by independent, impartial experts" and said "Russian involvement doesn't sound like impartiality - what does Russia have to fear?"

The British defence laboratory analysing the nerve agent revealed Tuesday that it could not say definitively whether the substance used in Salisbury came from Russia. Moscow hailed that as a vindication of its repeated denials of involvement.

Russia's ambassador to the Netherlands and deputy minister for industry and trade Georgy Kalamanov attended the OPCW meeting, along with British chemical weapons expert and acting permanent representative to OPCW John Foggo.

A diplomatic source, who asked not to be named, told AFP that Russia had tabled a motion asking the OPCW to "involve Russia in some way or another in the investigation."

He described the atmosphere inside the meeting as "heavy."

The OPCW's experts have taken samples from the site in Salisbury and sent them to certified laboratories for analysis, but are still awaiting the results.

The OPCW's director released a statement Wednesday during the meeting stating that, per the group's rules, the "OPCW team worked independently and is not involved in the national investigation by the U.K. authorities," and adding that "No State Party is involved in the technical work that is being carried out."

Results of the tests on the samples "are expected to be received by early next week," the OPCW director said. "Once the results of the analyses of the samples are received, the Secretariat will produce a report on the basis of these results and will transmit a copy of this report to the United Kingdom." The statement said Britain had already "indicated its preference for disclosure of the report to other States Parties."

Russia has accused the West of wanting to put up a new Iron Curtain and warned of a return to the mutual isolation of the Cold War.

"It has reached such proportions and developed such ludicrous characteristics, that it's time to talk about the return of the grim times of the Cold War."

He urged the need "to stop the use of force in relations between states, not to bring matters to a new Cuban Missile Crisis."

The Kremlin has also demanded an apology from British Prime Minister Theresa May and her government for implicating Russian President Vladimir Putin in the attack, saying this "idiocy has gone too far."