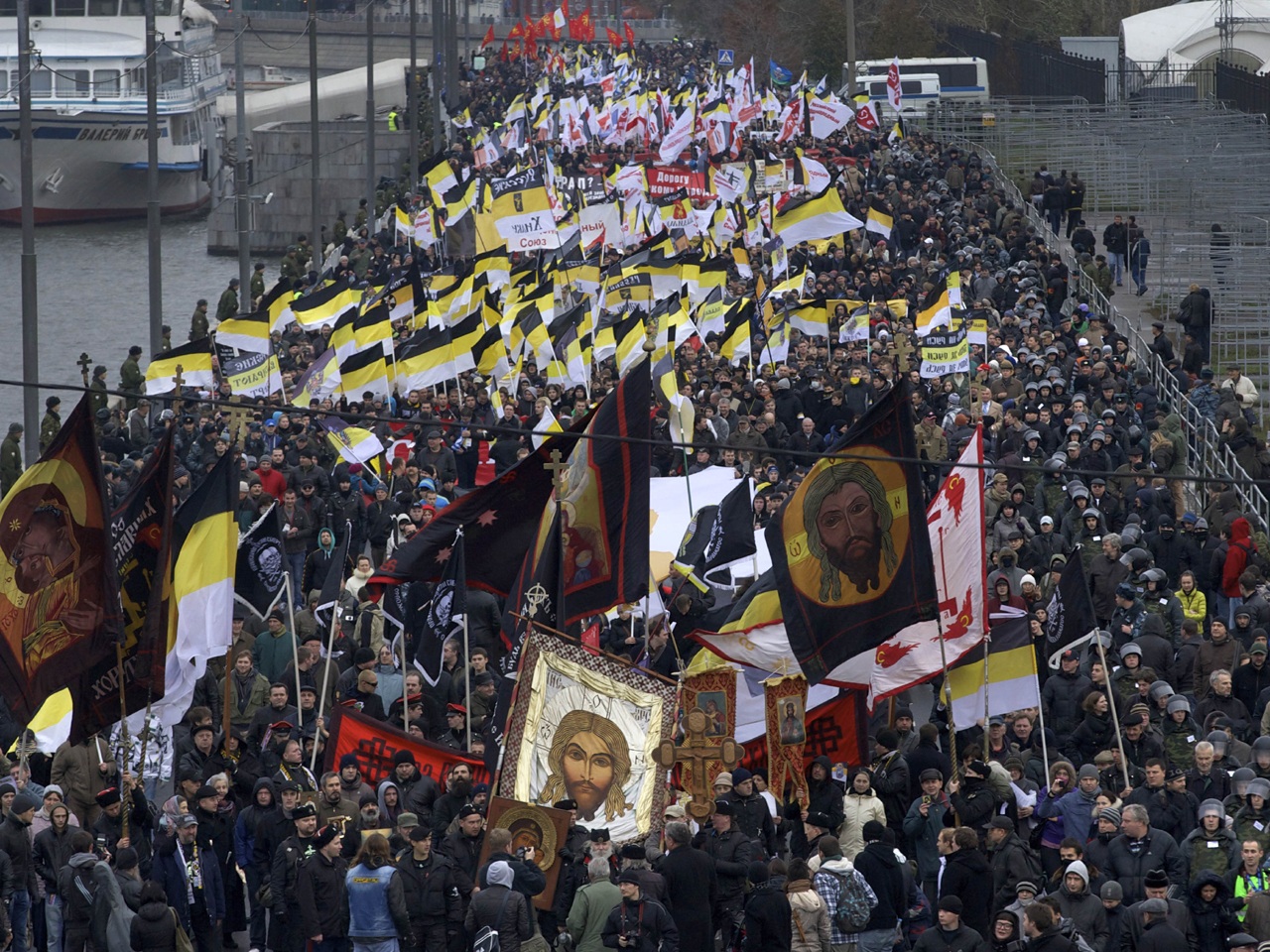 MOSCOW Thousands of nationalists marched through Moscow on Sunday chanting slogans such as "Russia for the Russians" to protest President Vladimir Putin's government, which they accuse of lavishing privileges on migrants and minorities while ignoring ethnic Russians.

The anti-Kremlin tone of the nationalists, who once backed Putin, comes as the movement's leaders try to broaden their base in the wake of last winter's historic opposition protests against the Russian leader. Some nationalists are even denouncing violence and racism, moves many mainstream opposition activists view with suspicion.

Sunday's march took place on Unity Day, a national holiday established in 2005 to replace commemorations of the Bolshevik Revolution. It has become associated with the nationalist "Russian March," which has taken a stridently anti-Kremlin tone. More than 40 Russian Marches were held throughout the country during the day.

Putin is "scared of us. He feels his time is coming to an end, because the future belongs to us," Alexander Belov, leader of the nationalist group Russkie, told the marchers in Moscow.

The Levada Center, an independent Russian survey agency, says its studies indicate that nearly half of Russians resent government subsidies to the restive, mostly Muslim Caucasus republics and dislike migrants from both the Caucasus and the former Soviet Central Asian states.

Such sentiments often overlap with the opposition movement that dramatically rose up last December after parliamentary elections tainted by fraud claims. Prominent opposition figure Alexei Navalny has called on the Kremlin to "stop feeding the Caucasus," particularly Chechnya, and was one of the Russian March's organizers until this year.

Nationalist leaders believe many ordinary Russians share their concerns but that they are put off by their movement's more radical members. As a result, some nationalist leaders have denounced racism and violence and some are even trying to set up a more mainstream political party.

"You hear it all the time: `I've really had it with the darkies, but I'm still not a nationalist,"' nationalist leader Konstantin Krylov told The Associated Press last week. "And then people go up to me after I speak at protests and say, `Listen, you're a nationalist, but you're telling it like it is."'

Although they make up a small part of the broad anti-Putin protest movement, nationalists are among its most visible members, thanks in part to their experience organizing Russian Marches. Nationalists have spoken at rallies alongside major opposition figures and ran for the opposition movement's elected governing council last month.

But mainstream opposition leaders are wary of the nationalists' violent racist elements, and few share their enthusiasm for a unified protest movement. Some organized a largely successful campaign to ensure that moderate nationalists were elected to the governing council instead of radicals.

And several liberals called for one nationalist to be expelled from the governing council after he wrote on Facebook that Sunday's march would be "as happy as the Holocau... as Halloween!"

"There was no reason to legitimize them," prominent opposition figure Vladimir Ryzhkov said. "It's like the Nazis in the 1920s — they were marginal until they got support from politicians and businessmen, and it brought the whole of Europe to ruin."

Nationalists staunchly supported Putin for much of his first two presidential terms in 2000-2008, and Putin frequently incorporated nationalist rhetoric in his speeches. After serving a term as prime minister, Putin is now in his third stint as president.

By the end of Putin's second presidential term, racist violence had skyrocketed. More than 100 immigrants were murdered yearly from 2007 to 2009, according to the Sova Center, which monitors hate crimes in Russia.

A crackdown began in 2010 when thousands of nationalist soccer hooligans clashed with riot police outside the Kremlin. Since then, 419 people have been convicted of violent hate crimes — more than in the six preceding years — and the racist murder rate has dropped by about 80 percent, according to Sova.

Prominent nationalist groups such as the Slavic Union and the Movement Against Illegal Immigration were banned for extremism. Krylov is trying to start the National Democratic Party, which he claims is modeled after "not even that conservative" center-right parties in Poland and the Czech Republic.

Sunday's march in Moscow was subdued compared to previous years, when skinheads have attacked migrants and clashed with police. Speakers' most common demand was for the body of the late Soviet leader Vladimir Lenin to be removed from a mausoleum near the Kremlin, in contrast to the xenophobic rhetoric that colored past rallies.

Nonetheless, Russian nationalism's future may lie with its crude rank-and-file rather than leaders who pepper their conversations with literary quotations and historical references, said Sova's Natalia Yudina.

"They're not good at speaking to the young, shaven-headed activists," she said. "If you try to ban Nazi salutes and racist chants, you're never going to be popular with this crowd."

Although Sunday's organizers said most participants in the march were ordinary people, skinheads with covered faces and neo-Nazis were highly visible. When a regional nationalist activist gave several fascist salutes, Belov rushed onstage and awkwardly hugged her to stop her from raising her right arm.

Though no violence was reported at the Moscow march, at least 100 people were involved in a brawl in a subway station between nationalist and anti-fascist activists shortly after it ended, the Interfax news agency reported. Police also detained 25 men wearing overcoats emblazoned with swastikas.

About 200 people were arrested for participating in unsanctioned Russian Marches in St. Petersburg, Nizhny Novgorod, Yekaterinburg and Kazan.

The rise in nationalist sentiment since the 2008 financial crisis should gather pace if economic conditions worsen in Russia, which relies heavily on oil and gas revenue, said Nikolai Petrov, an analyst at the Carnegie Endowment for International Peace.

"This is the tip of the iceberg," he added. "The Kremlin is worried that nationalist sentiment will become uncontrollable."