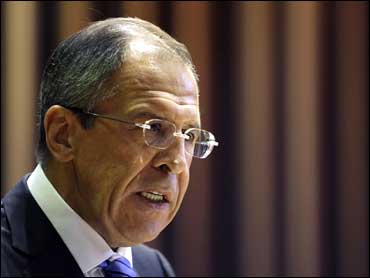 Russia warned the West on Monday against supporting Georgia's leadership and called for an arms embargo against the nation until a different government is in place in the ex-Soviet republic.

Foreign Minister Sergey Lavrov's remarks are likely to anger the United States and Europe and enrage Georgian President Mikhail Saakashvili. He made it clear Moscow wants Saakashvili out of power in Georgia.

"If the United States and its allies in the end choose not their own national interests, not the interests of the Georgian people, but rather choose the Saakashvili regime, it will be a mistake of historic proportions," Lavrov said.

"For a start it would be right to impose an embargo on weapons to this regime, until different authorities turn Georgia a normal state," he said in an address at Russia's top foreign policy graduate school.

Foreign Ministry spokesman Andrei Nesterenko said such suspicions were among the motives for Russia's call for an arms embargo against Georgia.

Nesterenko told a news conference there were "suppositions" that the cargo of U.S. military ships that have brought aid for war-battered Georgia may also have included "military components."

Nesterenko also said that Russia would welcome an international police presence and more Western military observers in what is now a Russian-controlled zone around South Ossetia, the focus of the war earlier this month. But he indicated it will be a long time before Russia is ready to reduce its military presence.

The foreign ministry officials spoke as the European Union prepared for a summit Monday to discuss the Georgia crisis and further relations with Russia.

Russia's ties to the West have been driven to their lowest point since the Soviet collapse of 1991 by the war last month in Georgia, where Saakashvili angered Moscow by courting the West and seeking NATO membership.

Russia says it was provoked. The United States and Europe have accused Russia of using disproportionate force and of violating the terms of a cease-fire that called for the sides to withdrawal their forces to pre-conflict positions. They have also denounced Russia's recognition of the separatist regions, saying Georgia's borders must remain intact.