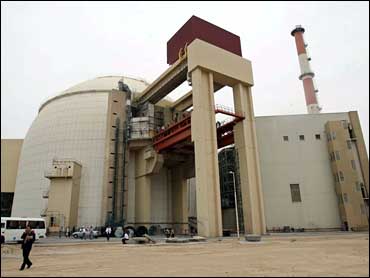 Russia and Iran reached an agreement Thursday on a schedule for finishing construction of the Bushehr nuclear plant, which plays a central role in the international tensions over Iran's nuclear program, Russian news agencies reported.

The reports cited the head of plant contractor Atomstroiexport, Sergei Shmatko, as saying details of the timetable would be released later this month.

The United States and other critics have long protested construction of the $1 billion plant, saying it would give Iran cover for developing a nuclear weapons program.

Construction at the plant has been sporadically delayed amid disputes between Iran and Russia over payment, fuel delivery and other issues. But Russia has remained opposed to a U.S.-led push for international sanctions against Iran for allegedly seeking to develop nuclear weapons.

"The difficulties with the Iranian contracts have been settled," Shmatko was quoted as saying by the Interfax news agency. He did not give details of the completion plans, but said that fuel would be delivered to Iran about half a year before it is needed to operate the plant, according to Interfax.

Shmatko's announcement came about an hour before Iranian Foreign Minister Manouchehr Mottaki was to meet in Moscow with his Russian counterpart, Sergey Lavrov.

Although Russia has resisted drives to impose sanctions on Iran, it also repeatedly has urged Tehran to cooperate with the International Atomic Energy Agency (IAEA) to resolve concerns over the nuclear program.

Shmatko on Thursday raised the prospect of creating a Russian-Iranian joint venture "to ensure security" at the Bushehr plant, according to the RIA-Novosti agency.

That could indicate Russian interest in ensuring that enriched uranium at the plant is not stolen or diverted. Depleted fuel rods also could be reprocessed into plutonium.

Ali Asghar Soltanieh, the country's envoy to the U.N. agency, said Iran "answered and explained" all questions from investigators.

"Technical talks about the source of contamination were held in a constructive atmosphere," Soltanieh was quoted by the official IRNA news agency as saying. "Another step was taken in the direction of settling the remaining problems surrounding Iran's nuclear issue."

He provided no details but said more talks could follow after IAEA reviews the case.

The talks with the IAEA team, which began Monday in the Iranian capital, focused on the discovery of traces of weapons-grade uranium at a technological faculty of a Tehran university. It's believed this was the first time the incident was discussed.

It is not clear how or when the find of the uranium traces was made.

The university contamination case comes in the wake of a U.S. intelligence report last week that concluded Iran had stopped its nuclear weapons program in late 2003 and had not resumed it since. Tehran says it never had a weapons program, insisting its nuclear activities aim only to generate electricity.

The U.S. is pushing for a new, third round of U.N. sanctions over Tehran's refusal to stop enrichment. Iran maintains it would never give up its right under the Nuclear Nonproliferation Treaty to enrich uranium and produce nuclear fuel.

U.N. diplomats said Wednesday the Security Council will not take up new sanctions against Iran until early next year because of serious differences between the U.S. and key European nations who want tough measures and Russia and China who don't.

The delay in the council's consideration of a third sanctions resolution followed a 90-minute telephone discussion Tuesday of political directors from the U.S., Russia, China, Britain, France and Germany that highlighted the divide among the key players.

"I think it unlikely, unfortunately, that we will be able to make progress during 2007," Britain's U.N. Ambassador John Sauers told reporters. "We will come back to this issue in 2008."

Reports say they also detained five others in the southeastern province of Sistan-Baluchistan.

The TV report says police were pursuing a group of "counterrevolutionaries," clashed with them and killed their leader and 11 others near the town of Iranshahr, about 994 miles southeast of Tehran.

Gen. Mohammad Ghaffari, the province's police chief, told national TV the suspects were members of Jundallah, or God's Brigade, a group active in the area.