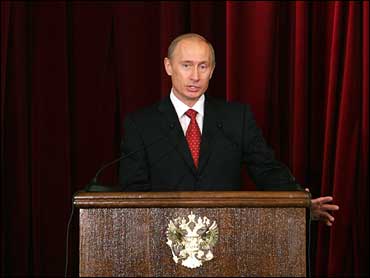 President Vladimir Putin on Tuesday urged the United States to begin negotiations on a new weapons treaty to replace the key START agreement that expires in 2009.

"We have come to the moment where modernization of the whole architecture of global security is necessary," Putin said in his speech to Russia's diplomatic corps — a biannual assessment of Moscow's place in the world and a chance to set new foreign policy goals.

"We call for the renewal of dialogue on key weapons reduction issues — first of all, we propose to our American partners to launch negotiations on replacing the START treaty," Putin said.

The treaty, signed on July 31, 1991, by the United States and the Soviet Union, places limits on the number of various types of vehicles and attributed warheads that could be deployed by either side.

"Relations between such powers as Russia and the United States must be built exclusively on the basis of equal rights and mutual respect," Putin said. The comment appeared to reflect the Kremlin's frequent bristling at criticism from its old Cold War foe.
Turning to Iran, Putin said Russia had significantly contributed to helping resolve the crisis over Tehran's nuclear program.

"We will not participate in an ultimatum which would drive the situation into a dead end," he said.

The United States and Europe are pressing Iran to quickly respond to a package of incentives to give up uranium enrichment and resume negotiations over its nuclear ambitions.

The West suspects Iran is enriching uranium to create nuclear weapons. Tehran contends the program is peaceful, intended for the generation of electricity.

Putin said Moscow had contributed by putting forward plans of building international uranium enrichment centers, where Iran could have other countries, such as Russia, enrich uranium on its behalf.

Tehran says it is still considering the offer.

The meeting began with the diplomats standing for a moment of silence for four Russian Embassy workers who were kidnapped and killed in Iraq.