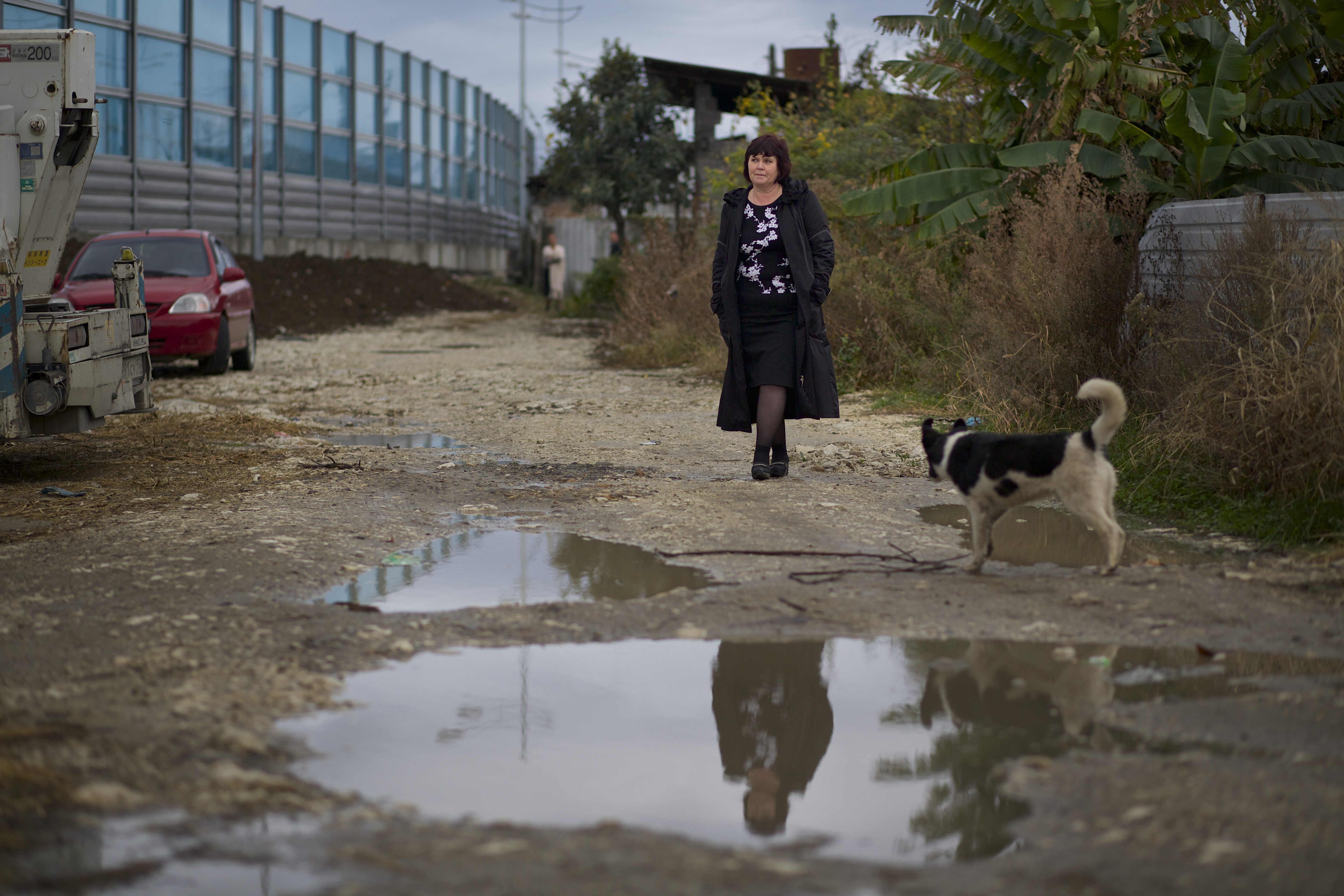 SOCHI, Russia -- A shining new $635 million highway on the outskirts of Sochi stands next to a crumbling apartment block with a red "SOS!" banner on its roof.

The residents of 5a Akatsy street have lived for years with no running water or sewage system. Construction for the 2014 Winter Games has made their lives more miserable: The new highway has cut them off from the city center. Even their communal outhouse had to be torn down because it was found to be too close to the new road and ruled an eyesore.

The slum is one of the many facets of a hidden dark side in the host city of next month's Winter Olympics, which stands side-by-side with the glittering new construction projects that President Vladimir Putin is touting as a symbol of Russia's transformation from a dysfunctional Soviet leviathan to a successful, modern economy. While state-run TV trains its cameras on luxury malls, sleek stadiums and high-speed train links, thousands of ordinary people in the Sochi area put up with squalor and environmental waste: villagers living next to an illegal dump filled with Olympic construction waste, families whose homes are sinking into the earth, city dwellers suffering chronic power cuts despite promises to improve electricity.

Putin promoted the Sochi Games, which begin on Feb. 7, as a unique opportunity to bring investment to the Black Sea resort and improve living standards for its 350,000 residents. Looking back at those promises, many residents, weary from years of living in the midst of Russia's biggest construction project in modern history, say they have yet to see any improvement in their lives and point to an array of negative effects.

"Everyone was looking forward to the Olympics," said Alexandra Krivchenko, a 37-year-old mother of three who lives on Akatsy street. "We just never thought they would leave us bang in the middle of a federal highway!"

People elsewhere in Sochi and surrounding villages have seen the quality of their life decline because of Olympic construction. In the village of Akhshtyr, residents complain about an illegal landfill operated by an Olympics contractor that has fouled the air and a stream that feeds the Sochi water supply. Waste from another illegal dump in the village of Loo has slid into a brook that flows into the already polluted Black Sea.

In the village of Mirny, just outside the Olympic Park, rumbling trucks have damaged foundations and caused homes to sink. And right across the railroad tracks from the Akatsy building, another multifamily residence has become prone to flooding after an Olympics-related road was built nearby.

Sochi residents also complain about widespread environmental damage, including the destruction of forests and the contamination of a river running down to the sea. Near the Olympic Park, a popular sandy beach was paved over for the development of a port that was never built.

The Winter Games were intended to showcase Russia's resurgence from the collapse of the Soviet Union two decades ago. From drab sanatoriums to gleaming ski resorts. From outdoor markets with counterfeit clothes to boutiques filled with international brands. When an AP correspondent asked the Sochi mayor last year what had changed in the city for the better, Anatoly Pakhomov started talking about a new shopping mall and a Louis Vuitton store as symbols of positive change.

Amid such pride in status symbols, Sochi has fallen short in providing basic necessities, residents say.

Two giant power stations have been commissioned to provide electricity for the Olympic venues and the city, but power shortages across the city are still ubiquitous. At a recent televised meeting with Putin, Russia's energy minister said the grid was still being built and was unlikely to come online before Saturday, less than two weeks before the opening ceremonies.

The city has undertaken a colossal effort to upgrade its infrastructure and municipal services, installing a new sewage and waste-disposal system and hooking up thousands of homes to pipelines supplying natural gas. Three weeks before the start of the games, some Sochi streets remain dug up as construction workers continue to lay down new pipes and pavements.

Thousands of people whose homes were demolished to make way for Olympic construction have been relocated, but many others are still waiting for new homes. Meanwhile, even as investment has poured into Olympic facilities, Sochi's slum dwellings remain standing: The city government told The Associated Press in a written statement that more than 100 apartment buildings and private homes have been classified as uninhabitable.

For many residents, the Sochi they live in bears little resemblance to the city they see on Kremlin-controlled national television.

"It's a parallel universe that locals to a great extent have no access to," said Olga Beskova, editor of the local website Sochinskiye Novosti, or Sochi News. "It has very little to do with how Sochi lives every day. So far, city streets are all dug up, residents have a lot of problems, and it's hard to see a happy ending after all of this construction."

The people on Akatsy street have petitioned for decades to get the government to classify the 1941 barracks-like building as uninhabitable and provide them with new housing, so far with no success. They put up their red "SOS!" sign in a desperate effort to call attention to their plight. City Hall has insisted that the government roads management agency is responsible for relocating the Akatsy residents; the road agency shifts the responsibility on City Hall.

The Akatsy house, in the village of Vesyoloye, is less than two miles from the Olympic Park, where the arenas and main stadium are located. Like thousands of private houses in Sochi, this property is not connected to city water or sewage systems, but residents have made do over the years by drilling wells and building outhouses.

Adding humiliation to hardship, the roads agency secured a court ruling ordering them to pull down their common outhouse, which stood on the edge of the new highway. Krivchenko's neighbor, Irina Kharchenko, whose family is seeking justice for 5a Akatsy in court, said the judge told them to "get yourselves a bio toilet."

Residents seemed embarrassed and reluctant to explain how they got around the problem. Some mentioned a bucket, while others pointed to an outhouse on the other side of the property.

Unusual for Russia, Sochi residents are not only willing to talk to reporters but stop them in the street and invite them over to see "what the real Sochi looks like."

Across railroad tracks is another barracks-type house with no indoor plumbing, where Vladimir Zarytovsky has been living for 43 years. Since a road for the Olympics was built nearby, the house and yard have become prone to flooding.

"You have to put on rubber boots if you want to go to the toilet," Zarytovsky, 56, said with a chuckle as he pointed to water marks crawling up the walls of the wooden outhouse and outdoor kitchen that reach a foot high.

His 29-year-old son, Igor, lives elsewhere with his wife and two children, but says he still loves the house where he grew up, even though it is crumbling.

What he resents is what he describes as the lies on Russian state television.

"I watch Channel One and get the feeling that I am living in paradise," he said. "It's disgusting to hear the governor and the mayor singing songs to Putin, telling him that everything is fabulous."