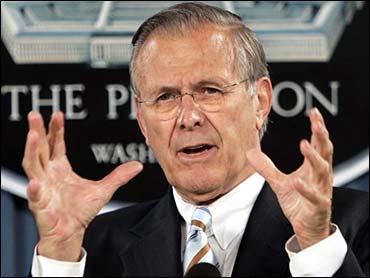 Defense Secretary Donald H. Rumsfeld gets a chance this weekend to consult with Asian allies about containing North Korea's nuclear threat and to outline U.S. military policy for the region at a conference with many of the area's top leaders.

Rumsfeld left Thursday for Singapore, where he will attend an annual Asian security conference sponsored by the International Institute for Strategic Studies. His schedule includes one-on-one meetings with his counterparts from Japan and South Korea, and a keynote speech Saturday where he is expected to discuss issues such as shipping security, fighting terrorists and his plans to restructure U.S. troop presence in the region.

North Korea is sure to be a main topic at the conference. The U.S. is trying to restart six-way talks with North Korea, South Korea, Japan, China and Russia aimed at getting North Korea to give up its nuclear weapons programs.

The prospects for quickly reviving those talks were jarred Thursday after North Korea cited recent remarks by Vice President Dick Cheney as another reason to avoid the discussions. A North Korean foreign ministry spokesman called Cheney "the most cruel monster and bloodthirsty beast" after the vice president said the North's leader, Kim Jong Il, was "one of the world's most irresponsible leaders."

The reclusive communist country's government has said it has nuclear weapons, and U.S. officials say Pyongyang may have as many as six atomic bombs. U.S. officials recently have warned the North against testing a nuclear weapon, saying it could lead to an arms race in Asia.

Citing security concerns, the Pentagon last week broke off its only cooperative effort with North Korea — expeditions to recover the remains of U.S. servicemen missing from the Korean War.

At a news conference Tuesday, President Bush defended his diplomatic approach to North Korea, rejecting criticism that it has allowed North Korea's government to expand its nuclear program. Mr. Bush said trying to persuade Pyongyang to abandon the program through six-nation talks was the most likely route to success.

Last week, the U.S. announced plans to send 15 F-117A stealth fighters to South Korea in a move the Pentagon said was for a training exercise. North Korea condemned it, saying through state-run Korean Central News Agency that the deployment was a "danger signal predicting the outbreak of a war."

Such fiery rhetoric is common from North Korea, which says it must have a nuclear deterrent because the U.S. is hostile to Pyongyang. Mr. Bush and other U.S. officials say they have no intention to invade North Korea.

Next week, Rumsfeld travels to Norway to meet with Defense Minister Kristin Krohn Devold. The two will visit a NATO center and then travel to a meeting of NATO ministers.