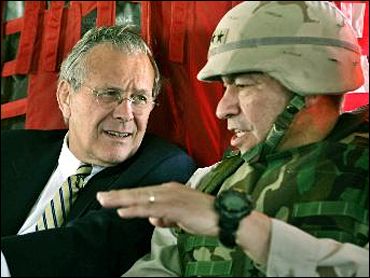 Defense Secretary Donald H. Rumsfeld, at the outset of a hastily arranged visit to Iraq aimed at containing the prisoner abuse scandal, said Thursday that U.S. administration lawyers are advising the Defense Department not to publicly release any more photographs of Iraqi prisoners being abused by U.S. soldiers.

"As far as I'm concerned, I'd be happy to release them all to the public and to get it behind us," Rumsfeld told reporters traveling with him from Washington. "But at the present time I don't know anyone in the legal shop in any element of the government that is recommending that."

The government lawyers argue that releasing such materials would violate a Geneva Convention stricture against presenting images of prisoners that could be construed as degrading, Rumsfeld said en route to the Iraqi capital on a trip that was not announced in advance due to security concerns.

Rumsfeld was accompanied by Gen. Richard Myers, chairman of the Joint Chiefs of Staff, and several lawyers on a trip designed to reassure U.S. troops that the prisoner abuse scandal has not weakened public support for their mission and to get firsthand reports from the most senior commanders.

The trip followed President George W. Bush's visit Monday to the Defense Department, where he got an update from commanders in Iraq and declared his unwavering support for Rumsfeld, who has taken a lot of criticism from members of Congress for his handling of the scandal. Some Democrats have called for his resignation, but Rumsfeld gave no indication Wednesday that he was considering quitting.

The 71-year-old defense chief did appear weary, however. He has weathered three lengthy rounds of questioning from congressional committees over the past several days. After taking questions aboard his plane for nearly an hour he called a sudden halt, saying his voice was giving out.

He fiercely defended the Defense Department's response to the revelations of U.S. guards at the Abu Ghraib prison having subjected Iraqi prisoners to sexually humiliating treatment and photographing it.

"The garbage that you keep reading about cover-up and the Pentagon doing something to keep some information from people is unfair, inaccurate and wrong," he said. "And if I find any evidence that it's true, I'll stop it."

Rumsfeld also predicted that the abuse scandal would get worse in the days ahead.

"More bad things will come out, unquestionably," he said without being specific. "And time will settle over this and we'll be able to make an assessment of what the effect has been" on the effort to stabilize Iraq. "It clearly has not been helpful. It has been unhelpful."

He went on to complain bitterly about the Arab media's coverage of U.S. operations in Iraq.

"We have been lied about, day after day, week after week, month after month for the last 12 months in the Arab press." He specifically mentioned the al-Jazeera and al-Arabiya satellite TV networks.

In Washington, members of Congress viewed fresh photos and videos of Iraqi prisoner abuse on Wednesday, and said they included disturbing images of torture and humiliation.

"The whole thing is disgusting and it's hard to believe that this actually is taking place in a military facility," said Sen. Dianne Feinstein.

Several senators, speaking on condition of anonymity, said photos of sexual intercourse were among the images that Defense Department officials screened for lawmakers in a top-secret room in the Capitol. At least some of them appeared to depict consensual sex involving U.S. military personnel, they added.

Others showed military dogs snarling at cowering prisoners, as well as shots of Iraqi women commanded to expose their breasts, these senators said.

Some key senators thought the pictures should remain secret -- and not just because they are evidence in a criminal investigation, reports CBS News Correspondent David Martin.

"It diminishes these photos from inspiring the enemy from inflicting further damage, harm, otherwise on the members of the armed forces of the United States,'' said Sen. John Warner, R-Va.

"I don't know how the hell these people got into our army," said Ben Nighthorse Campbell after viewing the images.

"There were several pictures of Iraqi women who were disrobed or putting their shirts up," he said. "They were not smiling in the pictures, that's for sure. But it didn't look like they had been beaten or hurt."

He also said there were several pictures with dogs. "Iraqis were against the wall and you could see that the dogs were pretty much terrorizing them because the dogs were snarling and crouching like they were about to attack," he added.