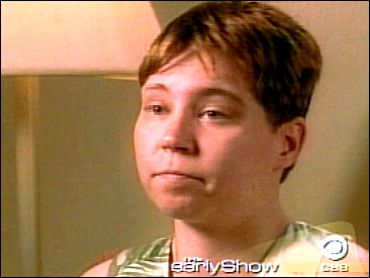 Army Pfc. Lynndie England, seen worldwide in photographs that show her smiling and pointing at naked Iraqi prisoners, said she was ordered to pose for the photos, and felt "kind of weird" in doing so.

In an exclusive interview with Brian Maass of Denver CBS station KCNC-TV, England also confirmed that abuses worse than those depicted in the photos were carried out at the U.S.-run Abu Ghraib prison near Baghdad, but she declined to discuss them.

England, 21, repeatedly insisted that her actions were dictated by "persons in my higher chain of command."

In the photos, England is seen smiling, cigarette in her mouth, as she leans forward and points at the genitals of a naked, hooded Iraqis. Another photo taken at Abu Ghraib shows her holding a leash that encircles the neck of a naked Iraqi man lying on his side.

"We thought that's how they did it," England said. "We're not trained as MI or CIA -- mind games, intimidation, it sounded pretty typical to us."

England said the actions depicted in the photos were intended to put psychological pressure on the Iraqi prisoners.

"Well, I mean, they [the photos] were for psy-op reasons," she said "And the reasons worked. I mean, so to us, we were doing our job, which meant we were doing what we were told, and the outcome was what they wanted. They'd come back and they'd look at the pictures, and they'd state, 'Oh, that's a good tactic, keep it up. That's working. This is working. Keep doing it. It's getting what we need.'"

England said she has no regrets about how the prisoners were treated.

"It got information, some reliable, some of it was about future attacks on coalition forces," she said. "We don't feel like we were doing things we weren't supposed to, because we were told to do them. We think everything was justified because we were instructed to do this and do that."

England, an Army reservist from West Virginia who is four months pregnant, is now stationed at Fort Bragg in North Carolina. The interview was taped Tuesday at Fayetteville, N.C., near Fort Bragg.

England is among seven soldiers from the 372nd Military Police Company who face charges for allegedly degrading and humiliating Iraqi prisoners. One soldier, Spc. Jeremy C. Sivits of Hyndman, Pa., will face a court-martial in Baghdad next week.

"To all of us who have been charged, we all agree that we don't feel like we were doing things that we weren't supposed to, because we were told to do them. We think everything was justified, because we were instructed to do this and to do that," England said.

She told KCNC she was looking forward to having her baby and hopefully one day putting the abuse scandal behind her.