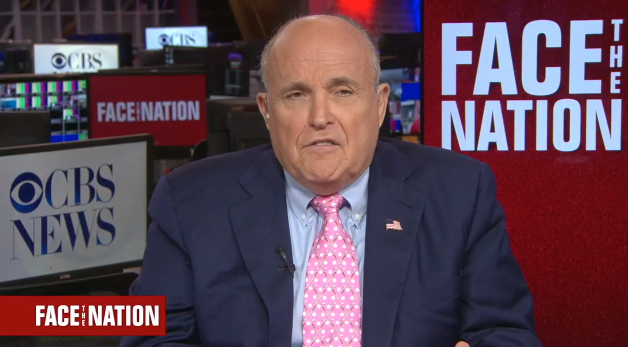 Rudy Giuliani says that he is "unattached" to the current debate over immigration and the separation of families at the border, but said neither him nor the president "like to see children taken away from their parents." His comments come as lawmakers face mounting pressure to act on the administration's "zero tolerance" policy of prosecuting those suspected of crossing the U.S.-Mexico border illegally and placing their children in U.S. custody.

Giuliani has weighed in issues ranging from the Iran nuclear deal and negotiations with North Korea since joining Mr. Trump's personal legal team. On "Face the Nation" on Sunday, he said the White House has not authorized him to discuss policy matters, but "they haven't stopped me from it."

"I'm still I'm a private citizen, so I'm not binding the White House. I'll give you my view as a private citizen and somebody who enforced the immigration laws for years," the former federal prosecutor and New York mayor added. "It seems to me this all gets resolved if they do some kind of comprehensive bill, and the administration is doing something not terribly dissimilar to what Bush and Obama were forced to do because Congress wouldn't act."

Both Bush and Obama declined to order blanket prosecutions of immigrants at the border.

"Now, maybe this administration is doing it more thoroughly. I don't like to see, and I know President Trump doesn't like the children taken away from their parents," Giuliani said.

The president has falsely claimed that federal law requires the separation of immigrant families crossing the border and has blamed the Democrats for the situation, despite his own attorney general, Jeff Sessions, touting the policy as a deterrent for illegal immigration.

Giuliani reiterated his view that the issue could be resolved if Congress passed a comprehensive immigration bill. He placed partial blame for the separation issue on Sessions, who rolled out the zero tolerance policy last month.

"I know Jeff [Sessions] really, really well and I think he's, you know, in certain respects did a great job. In some respects, I'm sort of disappointed in him," said Giuliani. He added, "I think here Jeff [Sessions] is not giving the president the best advice."