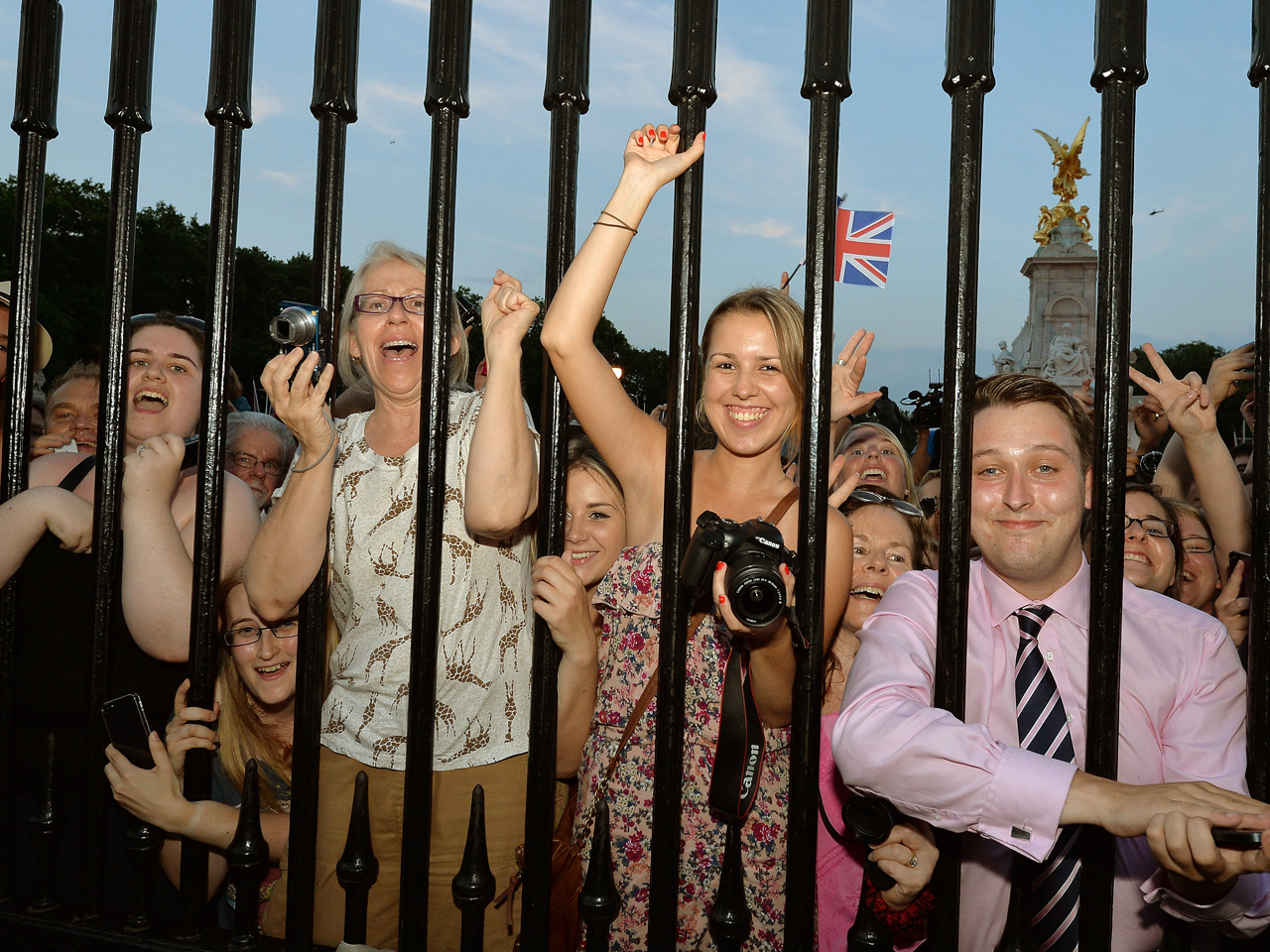 LONDON It's a boy for Prince William and Kate, Duchess of Cambridge.

The former Kate Middleton gave birth to the couple's first child, a son, on Monday afternoon at a London hospital.

The birth was announced via a formal press release issued by Kensington Palace, which stated that the duchess "was safely delivered of a son" at 4:24 p.m., local time, weighing 8 lbs., 6 oz.

"The Duke of Cambridge was present for the birth," the statement added. "The Queen, The Duke of Edinburgh, The Prince of Wales, The Duchess of Cornwall, Prince Harry and members of both families have been informed and are delighted with the news."

Mother and son are both doing well, the palace said, and will remain in the hospital overnight.

"We could not be happier," Prince William said via a palace spokesperson. He will be spending the night at the hospital with his wife and new baby.

A palace source tells CBS News that William was with the duchess throughout her labor, and called the queen, Prince Charles, Prince Harry and the Middletons with the news.

In a statement, Charles said he and wife Camilla, Duchess of Cornwall, are "overjoyed" by the baby's birth.

"Grandparenthood is a unique moment in anyone's life, as countless kind people have told me in recent months, so I am enormously proud and happy to be a grandfather for the first time and we are eagerly looking forward to seeing the baby in the near future," he said.

A bulletin containing details of the birth was taken by car to Buckingham Palace and placed on an easel at the palace gates for the public to see. Initially, officials had planned to place the bulletin on the easel before issuing the news electronically, but changed course shortly before the birth was announced.

"Right across the country and indeed right across the Commonwealth people will be celebrating and wishing the royal couple well," Prime Minister David Cameron told waiting reporters in front of 10 Downing Street. "It is an important moment in the life of our nation but I suppose above all it's a wonderful moment for a warm and loving couple who got a brand new baby boy. It's been a remarkable few years for our royal family -- a royal wedding that captured people's hearts, that extraordinary and magnificent Jubilee and now this royal birth, all from a family that have given this nation so much incredible service, and they can know that a proud nation is celebrating with a very proud and happy couple tonight."

The royal couple's child will officially be known as His Royal Highness Prince [Name] of Cambridge.

The title follows the dukedom bestowed on William by his grandmother, Queen Elizabeth II, on his wedding day in 2011. Earlier this year, the queen issued a royal decree allowing this royal baby -- and all of William and Kate's children -- to be titled prince or princess. The decree said "that all the children of the eldest son of the Prince of Wales should have and enjoy the style, title and attribute of royal highness with the titular dignity of Prince or Princess prefixed to their Christian names or with such other titles of honour."

The world may have to wait considerably longer to learn the baby's name -- the royal family will reveal it in an official statement in the coming hours or days. Harry's name was made public on the day he was born. It took about a week for the palace to reveal William's name, and nearly a month before their father's name was uttered outside of palace walls.

Prince William was with his wife when she was brought by car from Kensington Palace to St. Mary's Hospital in London before 6 a.m. local timein the early stages of labor.

Kate gave birth in the hospital's private Lindo Wing, where Princess Diana gave birth to William in 1982 and Harry in 1984.

The new baby -- the first for William and Kate, who married in 2011 after a long courtship -- will be third in line to the British throne, behind Prince Charles and William. William is second in line, right behind his father, Prince Charles. The baby moves ahead of Prince Harry, who's now fourth in line.

Plenty of excitement has surrounded the royal birth. In the days leading up to the big day, reporters and photographers from the four corners of the globe clamored for pictures of the couple . The Royal Mint has minted 2,013 silver coins bearing a shield of the Royal Arms, to be given to newborns who share their birthday with the third in line to the British throne. Souvenirs and commemorative memorabilia are expected to flood Britain's stores.

At that time, the Duchess of Cambridge was suffering from hyperemesis gravidarum, a potentially dangerous type of morning sickness in which vomiting can be so severe that no food or liquid can be kept down. She was admitted to King Edward VII Hospital in London the same day the pregnancy was announced. Three days later, Kate was photographed leaving the hospital, alongside William, holding a bouquet of flowers.

From January into the spring, Kate made several public appearances as the world watched her baby bump grow. She attended a horse race, formally named a cruise ship and paid an official visit to Windsor Castle. In June, she withdrew from her public duties to get ready for the birth.

The former Kate Middleton and William became engaged in October 2010 during a trip to Kenya and were married in a lavish ceremony at Westminster Abbey on April 29, 2011.