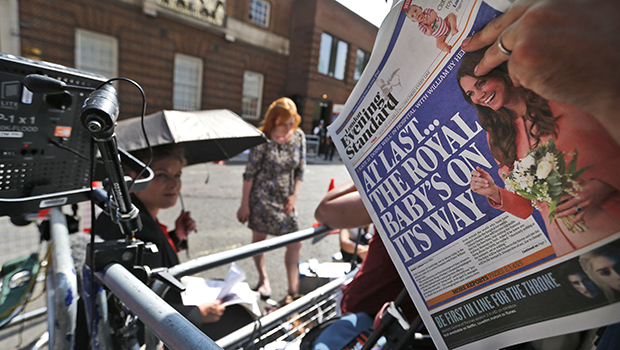 LONDON The "Great Kate Wait" is almost over.

The Duchess of Cambridge entered a London hospital Monday morning in the early stages of labor, as media outlets remain camped outside in anticipation of the royal baby's birth.

Prince William was with his wife, the former Kate Middleton, when she was brought, by car, to St. Mary's Hospital, Kensington Palace says.

Kate is expected to give birth in the private Lindo Wing of the hospital, where Princess Diana gave birth to William and his younger brother, Prince Harry.

The baby will be third in line for the British throne, behind Prince Charles and William, and is anticipated eventually to become king or queen.

A spokesperson for the royal palace told CBS News several hours after Kate was admitted that things were "progressing as normal," but would not give any further details on how the birth was going.

The child will be the first for William and Kate, who married in 2011 after a long courtship.

After the baby arrives, an aide will leave the hospital with a birth announcement and drive two-and-a-half miles to Buckingham Palace so it can be posted behind the gates in the forecourt on an easel, which was last used when Prince William was born 31 years ago. The announcement states the newborn's gender, weight and time of birth.

The child will be third-in-line to Britain's throne -- regardless, reports CBS News correspondent Elizabeth Palmer, of whether it's a boy or girl.

William is second in line, right behind his father, Prince Charles. The baby moves ahead of Prince Harry, who's now fourth in line. The succession change comes after a 2011 decision by the leaders of Britain and 15 Commonwealth nations endorsing new rules that give girls equal status with boys in the order of succession.

Palmer reported on "CBS This Morning" that England has had 58 kings, but only eight queens over the centuries, because until the rule change in 2011, royal boys were only first in line.

Asked what he knew about the looming birth by a reporter during a non-baby-related function in northern England on Monday, Prince Charles said, "absolutely nothing at the moment, we're waiting." He and wife Camilla were in York, about three hours from London on Monday.

The royal couple's child will officially be known as His or Her Royal Highness Prince or Princess of Cambridge. The title follows the dukedom bestowed on William by his grandmother, Queen Elizabeth II, on his wedding day in 2011. Earlier this year, Queen Elizabeth issued a royal decree allowing this royal baby -- and all of William and Kate's children -- to be titled prince or princess. The decree said "that all the children of the eldest son of the Prince of Wales should have and enjoy the style, title and attribute of royal highness with the titular dignity of Prince or Princess prefixed to their Christian names or with such other titles of honour."

Plenty of excitement has surrounded the royal baby birth. In the days leading up to the big day, reporters and photographers were staked outside the St. Mary's Hospital in London awaiting the baby's arrival. The Royal Mint has minted 2,013 silver coins bearing a shield of the Royal Arms, to be given to newborns who share their birthday with the third in line to the British throne. Souvenirs and commemorative memorabilia are expected to flood Britain's stores.

At that time, the Duchess of Cambridge was suffering from hyperemesis gravidarum, a potentially dangerous type of morning sickness in which vomiting can be so severe no food or liquid can be kept down. She was admitted to King Edward VII Hospital in London the same day the pregnancy was announced. Three days later, Kate was photographed leaving the hospital, alongside William, holding a bouquet of flowers.

From January into the spring, Kate made several public appearances, as the world watched her baby bump grow. She attended a horse race, formally named a cruise ship and paid an official visit to Windsor Castle. In June, she withdrew from her public duties to get ready for the birth.

The former Kate Middleton and William became engaged in October 2010 during a trip to Kenya and married in a lavish ceremony at Westminster Abbey on April 29, 2011.